Tonga is located in the South Pacific. The country consists of 169 islands, of which 36 are inhabited. Apart from Tuvalu, Tonga is the only monarchy among the Pacific island nations. The Tonga Islands have been inhabited by Polynesians since the Lapita culture in the 2000s BC. 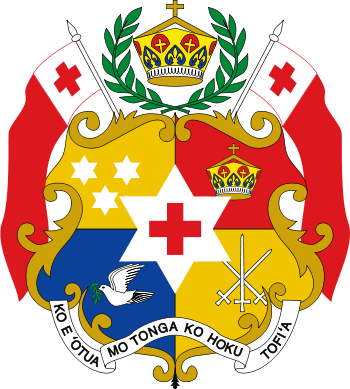 Around 950 AD the beginning of the Tongan Empire was founded when ‘Aho’eitu took over as the first Tu’i Tonga (“ruler of Tonga”). The empire was based on Tongatapu and later Mu’a was named the capital. The empire expanded during the 13th century. During the 16th century a series of civil wars broke out and during the 18th century the empire suffered further internal battles.

During this time, the first Europeans also came to Tonga. In 1616, the Dutch explorers Willem Corneliszoon Schouten and Jacob Le Maire discovered the Niuas Islands and in 1643 the Dutchman Abel Tasman discovered the Tongata Islands and the Ha’apai Islands. The British James Cook rediscovered the islands in 1773 and named them Friendly Islands. In 1781, the Spaniard Francisco Antonio Maurelle finally discovered the Vava Islands.

In 1845 a Polynesian monarchy was formed which was named the Friendship Islands under George Tupou I who then took the title Tu’i Kanokupolu. In 1865 the last Tu’i Tonga died and in 1875 the new kingdom of Tonga was founded under George Tupou I, whose descendants are still Tonga’s monarchs today.

In 1886, Tonga was declared neutral territory during the expansion of the great powers into the area, but the Berlin Treaty of 1899 gave Tonga status as a British protectorate, but without becoming a colony. In 1900, Tonga formally became a protectorate and part of the British West Pacific.

In 1952, Tonga left the protectorate and in 1970 became an independent monarchy and thus the only monarchy in the Pacific. In the same year, the country joined the British Commonwealth of Nations and in 1999 Tonga became a member of the United Nations (UN).

In 2006, King Taufa’ahau Tupou IV died and his son took over the throne as George Tupou V. Later that year, riots broke out in the capital Nuku’alofa. In 2008, King George Tupou V abolished the absolute monarchy and relinquished most of his powers to the Prime Minister.

Tonga’s infrastructure and community service are quite well developed and no residents are really poor. Natural resources in the country are mainly fish and fertile soil (about 24 percent of the country’s area is arable land).

Nearly two-thirds of the country’s residents live on its main island, Tongatapu, and although many have moved to the only major city, Nuku’alofa, where European and Tongan lifestyles are mixed, village life and kinship are still important in the country. Life on Tonga is heavily influenced by Polynesian traditions and especially by the Christian faith, for example, all commercial activities are closed throughout Sunday, and the constitution declares that the Sabbath is to be honored forever.

Tonga’s education system is free and compulsory for all children up to the age of 14, after this age lower fees are charged for further education. Tonga has a literacy of 98 percent. Medical care is also free, and the land on Tonga is protected by the constitution and therefore may not be sold to foreigners (even if it may be rented out).

Electricity and electrical outlets in Tonga

According to Countryaah, Nuku’alofa is the capital of Tonga and has 22,400 residents (1996). The city is located on the coast of the island of Tongatapu. The most important exports are copra, bananas, vanilla and handicrafts.

The Royal Palace and all government buildings are located in Nuku’alofa. In 2006, large parts of the city’s business area were destroyed in an uprising.