The War in Afghanistan IV

While ISAF consisted mostly of military forces from a total of 51 countries, several of these started in 2010 to prepare for the withdrawal of their troops. Agreement between NATO and the Afghan government indicated a general pullout by the end of 2014. At the same time, US authorities were working to keep a contingent of soldiers in Afghanistan, and some countries, including Norway, expressed interest in still having some personnel there. On the Norwegian side, this was primarily a contribution to the training and training of Afghan security forces and institutions.

By the end of 2013, the United States had a total of 46,000 soldiers in Afghanistan, while other NATO members and other countries had about 26,000 in total. When Afghan military forces took over responsibility for security in December 2014, NATO was given a new mission; Resolute Support Mission (RSM). The new force, which was operational from January 1, 2015, was intended to work out in 2016, but was resolved to continue in 2016. At the beginning of 2017, it consisted of around 13,300 soldiers from 39 countries; the vast majority (approximately 7,000) from the United States. Norway has made a contribution to the RSM from the beginning, but with a thanks to 75 soldiers. In 2016, the figure was about 50, partly from special forces personnel and partly from staff officers, as well as a smaller sanitary element. RSM’s main task is to assist Afghan authorities, both civilian and military, with advice and training.

In January 2015, President Obama stated that the last U.S. soldiers would be withdrawn from Afghanistan by the end of 2016. Following a March 2015 meeting with Afghanistan’s newly elected President, Ashraf Ghani, Obama adjusted the schedule for the withdrawal of U.S. soldiers from Afghanistan. The new set-up means that about 9800 US soldiers will remain in the United States beyond President Obama’s reign while postponing the final withdrawal. The backdrop for the change is partly a significant increase in clashes between Afghan government soldiers and various resistance groups, and partly the desire for continued use of drones, especially in the border areas between Afghanistan and Pakistan. Drone warfare requires military bases in Afghanistan. 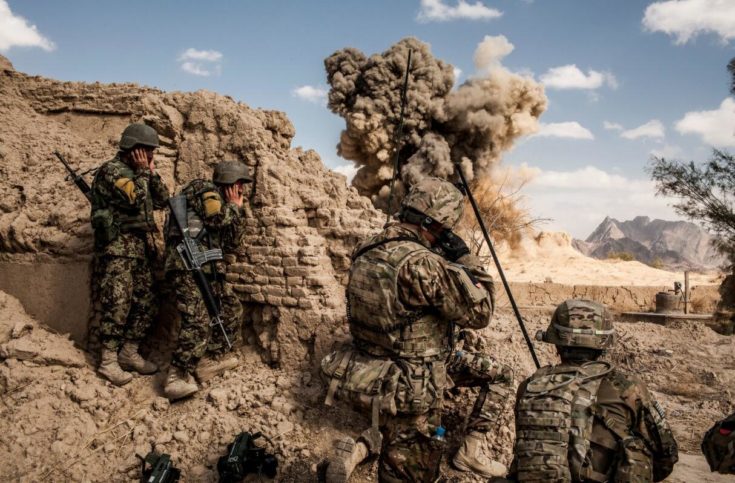 In October 2013, a principled agreement was reached between Afghanistan and the United States on a Security Pact, Bilateral Security Agreement, BSA. The pact will give the United States the right to maintain military forces in Afghanistan from a ten-year perspective, mainly related to the training of Afghan personnel and the conduct of joint counterterrorism operations. Among other things, the pact is meant to protect Afghan sovereignty, and the United States is to assist in cases of foreign attacks against the country.

Karzai did not sign the agreement, but stated that it was up to Afghanistan’s next president elected in April 2014. The reason was that he was not convinced that the United States would fulfill Afghan expectations as the country also has close relations with Pakistan, which Karzai perceived as a possible military threat. In addition, the agreement would not only allow the United States to have military bases in Afghanistan, it would also grant US military personnel immunity from possible prosecution under Afghan law. This point was disputed and helped to bring the negotiations out. On the other hand, during the discussions, Americans agreed to stop unannounced house transactions “except in very special cases”.

The aim was for the agreement to be formally concluded by the end of 2013, and the draft was dealt with in various instances in Afghanistan, including a so-called Loya jirga that was gathered at the end of November 2013. The jirga agreed to a rapid formalization of the draft agreement, while the Taliban for its part, condemned the decision and characterized the pact as a “covenant of slavery.”

Karzai failed to sign the agreement and also made new demands. In addition to heavy blows to American behavior in the country, he demanded that the US release 19 Afghan prisoners from the Guantánamo base in Cuba. This was condemned by key participants in the Loya jirga, which showed that the Afghan demands on the US had been met and that further postponement was against Afghan interests. Their fears were that the United States, without agreement, would not only consider the withdrawal of all its forces by the end of 2014, but that annual military and civilian aid of the order of $ 8 billion would also be at risk. The first proof that this fear was real came in January 2014, when Congress halved civilian aid to about $ 6.8 billion compared to the 2013 appropriation.

Karzai’s skepticism about the agreement with the United States expressed doubts about whether U.S. officers would respect the agreement’s demands on military behavior, but this, as other parts of the president’s rationale, sparked fears among Afghan military who viewed US assistance as a necessity in the fight against the Taliban. By the way, Karzai was keen not to be remembered as the head of state that allowed a long-term foreign military stay in the country, a highly sensitive issue in Afghanistan. In line with this, in February 2014, Karzai released to the United States and NATO protests 65 political prisoners who had long been detained in Afghanistan without law and judgment. The US claimed that the prisoners were responsible for the killing of both Afghan civilian and military as well as ISAF soldiers, while the Afghan prosecutor justified the release with a lack of evidence against them.

At the NATO Summit in Chicago in May 2012, an agreement was reached that the Afghan National Army (ANSF) would have an annual need for outside aid in the order of $ 4.1 billion. Later, NATO upgraded the need to six billion, citing, among other things, that the number of military personnel had increased from 220,000 to 350,000. The Afghan demand was disputed within NATO. This was partly because of questions about the number of real soldiers, and partly because of the uncertainty surrounding the Afghan signing of the aforementioned security pact, BSA, between Afghanistan and the United States. However, the latter question was clarified when Ashraf Ghani, Afghanistan’s new president, signed the BSA already the day after he took office in September 2014.