Since the turn of the year 2001/2002, Norway has contributed militarily in Afghanistan, and about 7,000 Norwegians have so far participated in the war. The engagement has been justified along four lines; (1) request from the UN and the Afghan government; (2) solidarity with other NATO countries; stable Afghanistan will also have for Norway. 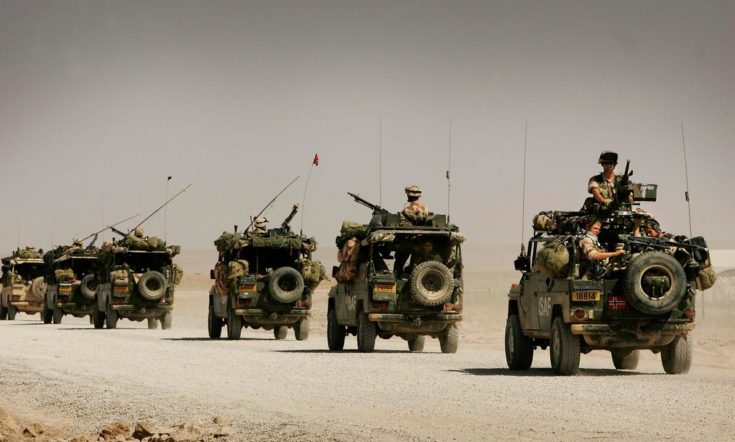 In 2002, Norway had the leadership role of the Afghan Support Group (ASG), a solidarity organization for 15 countries and the EU, and was actively involved in the dialogue with the Afghan authorities on the country’s development. In the years 2002–2003, Afghanistan received more Norwegian aid than any other country, some NOK 700 million, while Norway’s military contribution cost well over NOK 1 billion.

In November 2001, Norway sent staff officers to the United States Central Command, which had the highest military responsibility to launch Operation Enduring Freedom, and by the end of 2001, the first Norwegian soldiers were on duty in Afghanistan. The miners were the first Norwegian operational force and the task was to secure airports, among other things. Norway participated in Operation Enduring Freedom with one transport aircraft and in 2003 sent six F-16s to the country.

Soldiers from the Army Hunter Command and the Marine Hunter Command were the most important Norwegian contributions to the OEF. The Special Forces carried out reconnaissance and intelligence missions and on several occasions fought with Taliban and al-Qaeda insurgents.

Norway participated in ISAF from early 2002. In the earliest phase, Norway contributed, among other things, explosive teams and transport control at the airport in Kabul (2002) as well as a surgical unit and a fire and casualty team (2004-2005). The Norwegian military contribution to the war in Afghanistan was greatly expanded in December 2003 when 200 men from the Telemark battalion joined ISAF in Kabul. At the same time, Norway contributed from the beginning of this year with a so-called civilian military unit within ISAF. The unit built schools and helped to improve other infrastructure. This effort, which was discontinued after a couple of years, was disputed and criticized by NGOs (NGOs) who believed that a mixed civilian military effort exposed NGOs to increased risk.

In the years 2005–2013, Norway had a particular responsibility for improving the security situation in Faryab province northwest of the country. From the building of Afghan military capabilities, the focus was gradually placed on supporting Afghan security institutions, including the army and police.

In 2013, Norway signed an agreement to provide NOK 750 million in aid to Afghanistan over a three-year period, leading the country in the top tier of recipients of Norwegian aid. However, increasing corruption and violence against women, including within the police, led Norway to reduce its assistance to the country by NOK 50 million in the national budget for 2014.

According to the Global Peace Index 2013 from the Institute for Economics and Peace, Afghanistan was the second most troubled country in 2013, after Somalia. A strengthened Taliban has in recent years caused significant losses to the central government and foreign forces. In particular, the instruments have been road bombs, grenade attacks, suicide bombings and ambush attacks. The targets for the projections have been Afghan and foreign security forces, public offices, embassies, restaurants and hotels regularly frequented by foreigners as well as the UN’s buildings and vehicles.

In many countries that have had military forces in Afghanistan, there is disagreement and uncertainty about the value of the war that has been carried out – and is still ongoing. In a comprehensive survey in the United States in the New Year 2014, 38 percent of Americans believed that warfare in Afghanistan “for the most part” was a success, while 52 percent felt it had failed to reach its targets.

Foreign efforts in Afghanistan have contributed to the education of about eight million children, students can apply to 22 universities / colleges and women to a significant extent work in public and private business. The country has got better governance structures and a national army of about 200,000 men. Afghanistan, however, is characterized by huge health deficiencies, major legal and humanitarian weaknesses and widespread corruption. Ethnic conflicts and the Taliban’s recapture of former positions create justified fear especially among women and girls, and contribute to increasing security concerns.

In the period 2001-2013, the United States granted assistance of $ 4 billion to Afghanistan, and a number of other countries have also provided substantial sums for military and civilian purposes. Nevertheless, it is widely acknowledged that it was a serious mistake that the international force, and especially the United States, in the first years after 2001, had the almost unilateral focus on an early military victory – at the expense of development projects, agriculture and small industries that could have given the population jobs and believe in a better future.

During the period 2001-2013, approximately 3500 foreign soldiers were killed in Afghanistan, most of them Americans. By the end of 2013, a total of ten Norwegian military had lost their lives, while Denmark, for example, had lost 43.

There are no official figures for killed Afghans, but the country has lost many military, police and civilians. An indication of the extent of Afghan civilian losses gives figures from the United Nations Assistance Mission in Afghanistan (UNAMA), which in its February 2014 report states that 14,064 civilians have been killed since 2009. According to the organization, 2959 civilians died in 2013, while 5656 were injured., which was an increase in both the number of dead and injured from 2012. The seriousness is emphasized by the number is increasing and the statistics are associated with significant dark numbers. So-called missile bombings by foreign forces as well as night operations where foreign special forces enter Afghan homes, adversely affected the relationship between President Karzai and ISAF / USA.

One of the worst “bombings” in Afghanistan took place on October 3, 2015 in the provincial capital of Kunduz, north of the country. After a few days of doubt and partial denial, US authorities acknowledged that US bombers were behind the attack on a city hospital. Thirty people, many of whom were doctors and patients, including children, were killed. Twelve of those who lost their lives worked for Doctors Without Borders (MSF). President Obama conveyed regrets and condolences to the President of Afghanistan and to the leadership of the MSF, who in turn called the bombing a war crime. This was partly due to the fact that the hospital was clearly labeled and that the US military leadership was given information about the exact location of the hospital. Both the US and Afghan authorities, as well as NATO, started investigating the fatal bomb attack.

At the end of November 2015, the findings of the US military investigation into the bombing were made public at NATO’s headquarters in Kabul. The report’s main conclusion was that the bombing was due to “human error, procedural failure and technical failure”. The military aircraft crew confused the alleged target, an alleged Taliban base, with the hospital where more than 100 patients were admitted. Doctors Without Borders rejected the report’s explanation, again pointing to the precise information about the hospital’s location that was given to the United States military leadership shortly before the tragedy occurred. The organization therefore maintains its demand for an independent review.

Both Norwegian, Danish and Swedish military have taken Afghan lives without the number and circumstances always being clarified. Opinion and political opinion have sometimes demanded greater openness on this side of the war in Afghanistan, most recently in New Year 2014, for example, in Sweden, the Swedish Parliament was required to be briefed on what it means that the country’s military killed “a few dozen Afghans”. In November 2014, the government appointed a committee to evaluate and draw lessons from Norway’s military and civilian efforts in Afghanistan in 2001–2014. The committee, which was chaired by former Prime Minister Bjørn Tore Godal, submitted its report on June 6, 2016. The committee drew considerable criticism from the sides of Norway’s involvement in Afghanistan. Among other things, the Committee stated that one of the main goals – to contribute to the building of a stable and democratic state through long-term aid and peace diplomacy – has not been achieved. At the same time, the Committee pointed out poor management of substantial amounts of aid, which indirectly probably contributed to widespread corruption.