In November / December 2001, the German government, in consultation with the UN, organized a meeting in Bonn to discuss Afghanistan’s future following the deployment of the Taliban. The meeting was dominated by the Northern Alliance, and in order to curb the opposition, it was agreed to form a provisional government led by Pashtuner Hamid Karzai. The meeting agreed that an international force of about 11,500 men, led by the United States, continued the pursuit of bin Laden and the remnants of the Taliban. 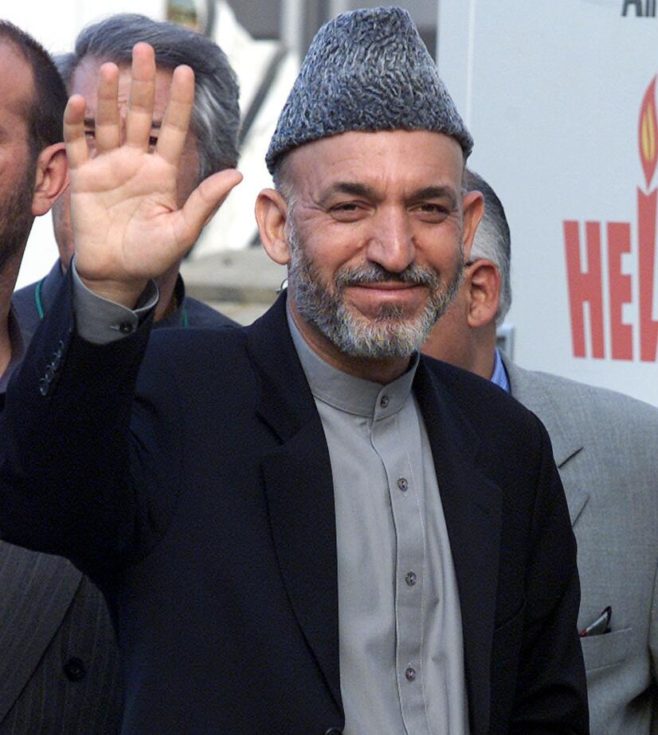 Hamid Karzai beckons to supporters after voting at the council assembly, called Loya Jirga, in Kabul on June 13, 2002 when he was elected interim president of Afghanistan.

In June 2002, 1,600 envoys from all Afghanistan’s provinces gathered for a council meeting in Kabul, a Loya jirga. Hamid Karzai was elected interim president. Shortly thereafter, he appointed a transitional government where the influence of the Northern Alliance was somewhat reduced. With the support of the UN, Norway and other countries, the Afghan authorities sought to build sustainable government agencies. A number of new laws and a new monetary system were adopted.

In January 2004, Afghanistan’s new constitution was passed by a council of 502 members, including 100 women. The constitutional meeting was characterized by fierce confrontations, especially between different ethnic groups. Karzai adopted a wide-ranging presidential government, although leaders of strong local groups, including many warlords, wanted a counterbalance in the form of an influential parliament with a prime minister as the government’s general manager. However, the Constitution paved the way for democratic elections at the National Assembly and President.

The United States supported the war of allies, both inside and outside NATO, and many expected the war to be short-lived. This was a view that had to be gradually revised. Norway participated with F-16 fighter aircraft from a base in Kyrgyzstan as well as with smaller special forces in the coalition forces until the fall of 2003. By this time, it was clear that the Taliban was rebuilding its organization, which was increasingly behind new guerrilla attacks, especially in the border areas against Pakistan.

The American warfare, and especially repeated attacks on civilians, was unpopular in large parts of the population in both Afghanistan and Pakistan, and the Taliban succeeded in exploiting this discontent to recruit new followers.

Alongside US forces, which concentrated their operations in the south especially through Operation Enduring Freedom, various countries built a peacekeeping force with a UN mandate, called the International Security Assistance Force (ISAF). ISAF was stationed in Kabul from the turn of the year 2001/2002 to protect the Provisional Government and promote security in the capital.

In August 2003, NATO assumed command of ISAF, which then comprised about 5,000 soldiers and officers. A few months later, an ISAF unit was stationed outside Kabul for the first time, specifically in the city of Konduz in the north of the country. In the mid-2000s, Afghanistan was thus the focus of several international players ; a number of individual countries, NATO and ISAF. In the autumn of 2005, the Stoltenberg government decided that all Norwegian military efforts in Afghanistan should be linked to ISAF.

In parallel with disputes between various centers of power in the provinces, the Taliban strengthened. Increased contradictions between the Kabul regime and some powerful warlords, including between the latter, allowed increased drug traffic and other crime. Particularly dramatic was the growth in opium production, of which Afghanistan has gradually become the world’s leading producer.

The warlords’ private militias, which were largely funded by drug trafficking, were estimated to have at least 100,000 men under arms in 2003, while the government army at that time comprised about 5,000 soldiers. The work to build a national defense force of 70,000 men took off in 2003. At the same time, the UN launched an ambitious plan – Disarmament, Demobilisation and Reintegration program (GDR) – with the aim of reducing the military power and political influence of warlords. The aim was to disarm the military soldiers, and then return them to civilian activities, possibly to the new national army.

While the country accounted for 70 per cent of world opium production in the year 2000, the authorities ‘and relevant international bodies’ estimates in 2015 were as much as 90 per cent. This is despite the fact that the United Nations and the United States in particular have spent huge sums in trying to fight production. Contrary to the experience of Thailand and Laos, it has been noted that farmers have been less tempted by support for alternative production, such as grapes, apples or saffron, when the income from such and similar products is, on average, one-seventh of what they can obtained by growing poppy plants. The backdrop for farmers is often extreme poverty, borrowing that has put them into debt and widespread corruption, including in local agencies that are supposed to fight the production, sale and transport of drugs. In areas controlled by the Taliban, it is often free,

Afghanistan’s many centers of power

Afghanistan has hardly ever had a strong centralized regime. The individual provinces have been extensively controlled and controlled by local warlords with their own military units, who have also collected taxes and fees from the local population. Citizens’ expectations and loyalty have been linked more to the warlords, provincial governors, clans and other local units than to the rulers of Kabul.

President Karzai tried to limit the power of the warlords, including by pulling several of them into the government, but in reality this has had little significance. Despite new legislation, a new parliament and tax and tax reform, Afghanistan remains a “patchwork” of small kingdoms and regions that are, to a large extent, and want to be self-governing.