Saarland, in the west of the Federal Republic of Germany, is the smallest German state. The state capital Saarbrücken is the center of the only metropolitan area and economic center of the state. After the end of the dependence on the previously important hard coal mining and the associated mining industry, the Saarland now has a balanced economic structure. From 1920 to 1957 the affiliation of the economically interesting Saarland changed between France and Germany.

With an area of ​​2570 km² and 1.03 million residents, Saarland is the smallest German state. It borders in the north and east on Rhineland-Palatinate, in the south and west on France and in the north-west on Luxembourg (Fig. 1).

The state capital and general center is Saarbrücken.

The Saarland lies in the German low mountain range. The largest part belongs to the Saar-Nahe-Bergland, which borders the Hunsrück to the south. Its formation goes back to the Carboniferous, and there are extensive coal seams.

The highest elevations are the Weißkircher Höhe and the Dollberg with 695 m in the Black Forest high forest, part of the Hunsrück. In the extreme south lies the hilly Muschelkalk plateau of the fertile Bliesgau, in the west of the Saargau.

The main river is the Saar, whose fertile floodplain is used for agriculture. The Saar forms a spectacular river loop near Mettlach.

Climatically, the Saarland, like the adjacent landscape areas, belongs to the area of ​​the Atlantic-continental transitional climate with cool and humid winters and moderately warm summers. Viticulture is possible in the climatically favorable Saar Valley.

According to themotorcyclers, almost 70% of the population belong to the Catholic Church, 20% to the Protestant regional churches. Saarland has a university, a music and art college, and four technical colleges, including one for mining.

With Saarstahl AG and AG der Dillinger Hüttenwerke, two large steel companies are still based in Saarland. An important branch of the economy was the hard coal mining. This was also of great importance for the population development. Today only RAG Deutsche Steinkohle’s Saar mine is still active.

Due to the structural crises, government measures have been taken to diversify the industrial sector. Companies in the metalworking, chemical, plastics, electrical, rubber and textile industries contribute to the versatility of the products that are produced in Saarland. The largest prefabricated house plant in Europe is also located in Saarland. Then there is the traditional glass and ceramic industry.

Today the Saarland is an industrial region with a diverse branch structure. The central location in Europe and the traditionally close trade relations with France promote economic growth.

Almost 30% of the Saarland’s area is used for agriculture. In addition to cereals, vegetables, fruits and vines are grown as special crops. The livestock industry is based on the breeding of cattle, pigs and poultry.

The central traffic junction is the Saarbrücken region, where the most important road connections come together. Motorways connect the Saarland with the Rhine-Neckar area, the Rhine-Ruhr area and Paris. The Saar is connected to the French canal network. Saarbrücken has an important port and an international airport in Saarbrücken-Ensheim.

After the First World War, the Versailles Treaty placed the southern parts of the former Prussian Rhine Province and the western parts of the Bavarian Palatinate under a League of Nations government for 15 years from 1920.

In 1935 the area known as the Saar area came back to the German Reich after a referendum. 1935-1940 the Saar area was united with the Palatinate to the Gau Saarpfalz and from 1940 to 1945 referred to as Westmark.

The area was under the administration of France from 1946. As part of the Paris Treaties, Federal Chancellor ADENAUER and French Prime Minister MENDÈS-FRANCE decided in 1954 within the framework of the “Western European Union” for a European status for the Saarland, the so-called Saar Statute. After the population had rejected the Saar Statute in a referendum in 1955, the Saarland was incorporated into the Federal Republic of Germany in accordance with the Franco-German Saar Agreement in 1957. 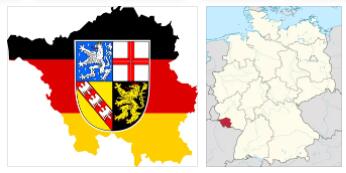