Almost the entire population of Saint Lucia are descendants of African slaves. Two out of five residents live in the capital Castries and its environs.

The indigenous people of the Caribbean who lived on the island when Europeans arrived (see Older History) were exterminated or expelled during the colonial era. Nowadays, Europeans’ descendants make up less than one percent of the population, but they form the core of the political and economic elite. 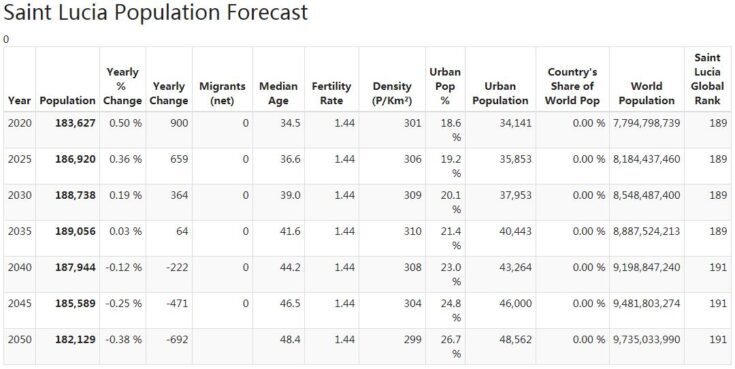 There is also a small group of Indian descent in the country. Their ancestors were plantation workers who were brought from India by the British colonial power in the late 19th century.

The number of paperless immigrants in Saint Lucia increased at the end of the first decade of the 21st century. During two periods in 2007 and 2009, the immigration authority issued a general amnesty to illegal immigrants from other countries within the Caribbean cooperation organization Caricom, so that these would have the opportunity to apply for a residence permit or citizenship.

Most residents are fluent in English, which is the country’s official language. A significant part of the population also speaks the mixed language (Creole language) patois, which is built in French with African elements.

black about 90%, small minorities of people of mixed origin, Indian origin or European-descended

English is the official language, patois (mixed language built in French with African elements) is also spoken by many.