Three-quarters of New Zealand’s residents live on the North Island, which is also smaller than the South Island and thus significantly more densely populated. Nearly one-third of the country’s population is in Greater Auckland, the country’s largest city and commercial center. Although the country is characterized by its agriculture in many ways, almost nine out of ten residents live in urban areas.

A majority of the residents are of European, mainly British, origin. About one in six counts as Maoris, thus a descendant of the country’s Polynesian urinals. These live mainly on the North Island, but there are Maoris in all major cities. The mixed marriage has been many and there are few Maori who have no European kinship. 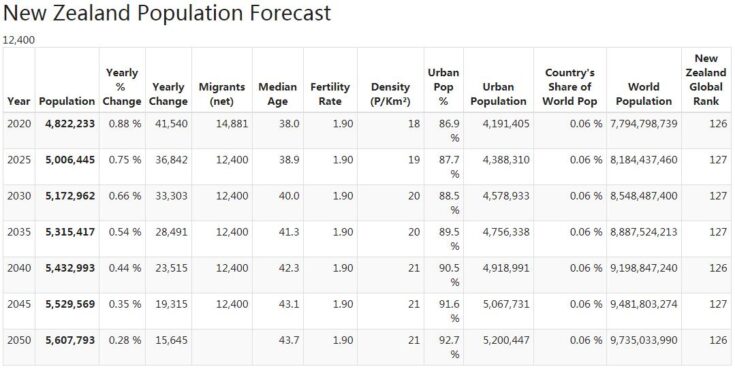 Of the other residents, a fast growing number are from Asia, mainly from China and India. A significant proportion have their roots in one of the small island nations of the South Sea, with the Samoans as the largest group.

Immigration has varied greatly over the years as has net immigration, ie the number of immigrants minus those who emigrate. In the 1870s many Europeans came to the country and even in the early 1900s immigration was high. In 1974, the government put an end to the unlimited immigration from the UK and Ireland and introduced the same rules for anyone who wants to move to New Zealand. From the 1990s, immigration declined, and the decade afterwards increased again. At the beginning of the 2010s, the relocation of more New Zealanders to Australia made net immigration small. From mid-2010, migrant flows to New Zealand grew again. A large proportion of the immigrants were British, but there were also Asians from China, India and the Philippines as well as South Africans. Most migrants were looking for work for a short time or wanted to study.

Immigration is a political issue of conflict. There is a widespread perception that there are too many immigrants, and that this is changing New Zealand’s lifestyle and culture. More recently, arguments that immigration is burdening infrastructure and community service and leading to rising housing prices have become increasingly common.

The English language dominates, but since 1987 also Maori, “te reo Maori”, is official language. Some Moorish words are commonly used in New Zealand everyday English, such as pakeha, which denotes people of European origin.

For a long time, Maori were forbidden to speak their own language in schools, which is why very few of them today have Maori as their mother tongue. According to the 2013 census, 21 percent of those who classed themselves as ethnic Maoris could speak Maori – a decrease from 25 percent in 2001.

Recently, the authorities have supported projects aimed at safeguarding and strengthening the language and culture of Maoris. This is rather uncontroversial among the majority population, but the demands for compensation, including for seized land (see Political system) and on bridging social and educational injustices often encounter less understanding.

About three-quarters of the residents are of European origin, just over 15% identify as Maori, in addition to a larger group of Asians and Polynesians

English and Maori are official languages