According to travelationary, New Hampshire is best known for its mountains, lakes and forests. Maple, birch and oak make it a spectacular destination during Indian Summer. In many places you will find almost untouched nature. Even well-known destinations like downtown Lake Winnipesaukee are touristy, but still offer plenty of pristine scenery to explore on hiking trails, horseback, or mountain bikes.

Framed by mountain peaks, New Hampshire’s largest inland body of water, Lake Winnipesaukee, forms an attractive recreational area with around 300 kilometers of coastline and countless islands and bays. Profile Lake is part of Franconia Notch, a mountain pass that cuts through the White Mountains. Waterfalls, granite canyons and numerous mountains over 4000 feet make the area one of the most scenic in New England. The landscape is dominated by Cannon Mountain, whose 1,254 meter high peak can be reached by cable car.

In the White Mountain National Forest you will find moose, wild rivers rush through mountains and valleys and you can hike through primeval forests. The White Mountain Trail is also a wonderful route for drivers: the Scenic Byway meanders more than 160 kilometers through the Mount Washington Valley, the Crawford Notch and Franconia Notch, through small villages and nature reserves, through the unpolished mountains of New Hampshire. It also crosses the Appalachian Trail, the footpath that runs 3,500 kilometers from Maine to Georgia through the eastern United States.

The outstanding mountain experience in New Hampshire, however, is Mount Washington, which at 1,917 meters is the highest mountain in the northeastern United States. He wears a snow cap almost all year round. Although you can either hike or drive to the highest peak, the most spectacular way to get here is by riding the legendary Mount Washington Cog Railroad. Steam locomotives puff past bottomless chasms for a good five kilometers and overcome an average gradient of 25%, in the end even 37%. The technical marvel has been in operation since 1869.

Incidentally, New Hampshire has exactly 20 miles of seafront, and it’s a matter of tact not to ignore it. When the youthful beach life rages on Hampton Beach, it gets quieter towards the north. In 1623 sailors settled in the old trading port of Portsmouth because strawberries grew here. “Strawbery Banke” is now an interesting open-air museum that allows a journey through time from 1695 to the middle of the 20th century.

Well-preserved homes from the prosperous 18th century line Market Street and the Portsmouth Harbor Trail, which runs through Old Town. If you like, you can also take a harbor tour or go whale watching. Other state highlights include the Canterbury Shaker Village, inhabited by the Shaker sect for nearly 200 years. In historic Concord, the Christa McAuliffe Planetarium is dedicated to the teacher who died in 1986 during the launch of the space shuttle Challenger. Of course, one must not forget the typical, delicious maple syrup. And shoppers can take advantage of New Hampshire’s tax-free shopping.

Location and Size
Located in the Northeast of the USA, New Hampshire’s northern neighbor is the Canadian province of Québec, on the south it borders on Massachusetts, on the west on Vermont, on the east on Maine. The state has an area of ​​24,216 km².

Population
New Hampshire has a population of just 1.3 million. 47,000 people live in the capital, Concord, and 110,000 in the largest city, Manchester.

Getting there
Numerous international airlines fly to Boston. Concord, the capital of New Hampshire, is 100 km from Boston and Manchester 86 km.

Climate
New Hampshire has a humid continental climate that is subject to wide variations in daily and annual temperatures. Summers are short and cool, winters are long and cold. Average temperatures in Concord are 21°C in July and 6°C in January. Annual rainfall in Concord averages 955mm and snow falls 1650mm each year. In the mountains it is up to 2540 mm.

Indian Summer
In the Indian Summer it is important to be in the right place at the right time. To find out where that is, the Foliage Network, for example, offers information for all states. Maps regularly provide an up-to-date overview of the degree of discoloration. By the way: The term “Indian Summer” in English describes the warmer period in autumn, but the phenomenon of leaf discoloration is called “foliage” or “fall foliage”. 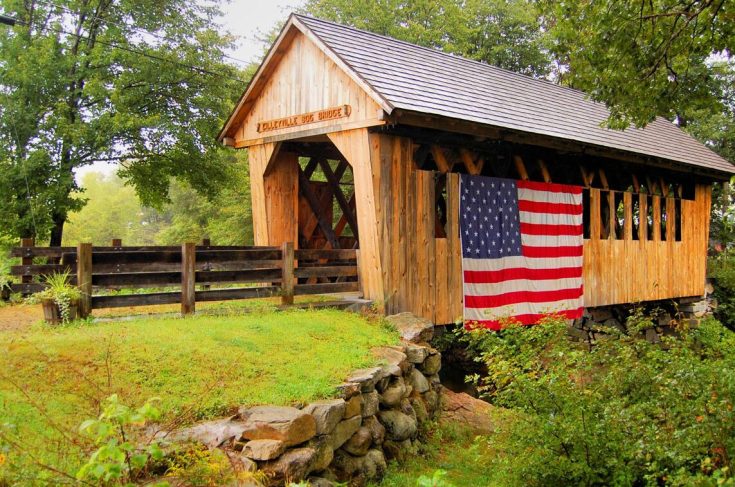