Numerous reports describe the independence and freedom of Burmese women, which is unique in Asia. Indeed, women play a central role in medium-sized companies and are on an equal footing with men in terms of marriage and divorce. On the other hand, Theravada Buddhism does not see women as equal because, according to the traditional view, they cannot leave the painful cycle of rebirths directly. This is reserved for monks only. Criticism of this fundamental inequality has so far hardly been voiced, since the questioning of the role of monks in Myanmar is a taboo subject.

The direct participation of women in Burmese politics has traditionally been low. This impression is also related to the fact that in the Western understanding of “politics” only the formal representation of the sexes in political offices is considered, while in Asia the influence of women through their families plays a major role. The special importance of Aung San Suu Kyi can therefore also be ascribed to the fact that she is regarded as the heir to her father Aung San. In the by-elections in Myanmar on April 1, 2012 and the elections on November 8, 2015, the NLD in particular elected numerous women who were then also elected.

There are a number of women’s organizations and congresses at which women’s rights are claimed.

According to payhelpcenter, the family is the core of Myanmar’s society to this day. Children are treated very leniently in their early teens, but show their parents lifelong respect and feel obliged to look after them as they grow older. All relatives are invited to family celebrations.

Until Aung San Suu Kyi appeared on the political stage, Mya Sein (1904-1970) was the most famous woman in modern Burma. Her father, May Oung (1880-1926) was a well-known intellectual and politician during the colonial era. After his untimely death, she followed in his footsteps. She wrote a highly acclaimed book on the administration of Burma and in 1931 represented the women of her country at a conference in London on the question of whether the country should be separated from India.

In 1958 she wrote about her brief “feminist” past:

“In politics we never had a major feminist movement because the issue of equal rights never came up in our society. However, under British rule that changed when Burma was part of British India and we are ruled under the same constitution as India Hence, in 1927 there was a small piece of feminist activity to abolish the requirement that women not be eligible for a seat in the Legislative Council [a parliamentary body that allowed Burmese a certain amount of self-government]. We women of Burma thought it was a given that the disqualifying clause should be removed. About ten of us made an appeal to the women of Rangoon to show our support for a resolution in the Legislative Council to remove the gender-discriminatory provision.

I think this was one of the first political demonstrations in Burma and although we were not immediately successful, our feminist sentiments only lasted two years. In 1929 a woman was elected to the board for the first time. We haven’t had any trouble since then and today there are six women in Parliament.

All in all, in our social and public life, we feel that as Burmese women we hold a privileged and independent position. It is a position for which we have been trained – almost imperceptibly and accompanied by love and security – from childhood. This position is not limited by marriage or motherhood and ultimately allows us to partake of the life, work and rewards our country has to offer on an equal footing with our husbands. ”

In contrast to the position expressed here, which is still widespread, efforts are meanwhile in the foreground of public debates aimed at the formal equality of women.

Many people in Myanmar, especially women and children, apply thanaka paste. It should protect against the sun – and heat – and delay skin aging. Thanaka is also used as make-up, applied very thinly to the entire face. Children also like to decorate their faces with flower patterns or other paintings. Thanaka is made from the bark of a crab apple tree. 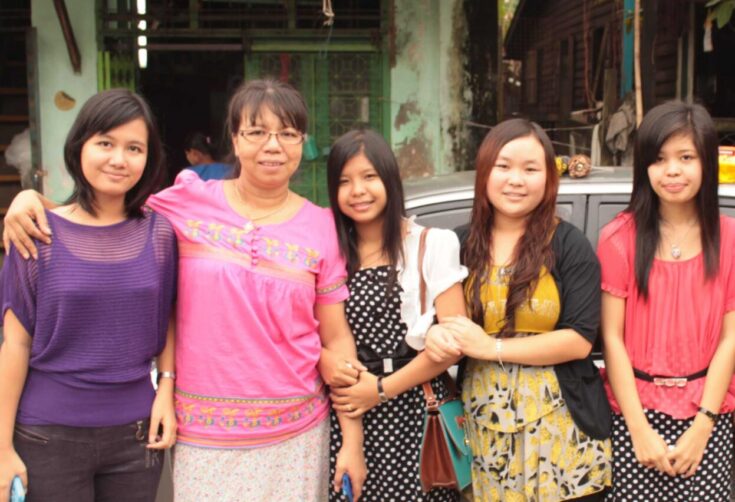