The violent conflicts between Rhakine Buddhists and Rohingyas go back to the time of World War II and have erupted repeatedly since then. In 1978 and 1991 there were mass exodus from Rohingya to Bangladesh, followed by long-running efforts by the international community that resulted in hesitant repatriations.

At the beginning of October 2016, the conflict over the Muslims known as Rohingya in the state of Rakhine, which has been in the global public eye since 2012, took a new turn. At that time, members of a hitherto largely unknown group attacked some Burmese police stations on the border with Bangladesh, killing security forces and stealing weapons and ammunition. The reaction of the security forces led to another wave of refugees to Bangladesh. Reports of atrocities committed by the Myanmar army have been circulated. The government denied the allegations.

Afterwards, a commission of inquiry set up before these events on the initiative of Aung San Suu Kyi and chaired by the former UN Secretary General Kofi Annan began its work. Buddhists in Rakhine and the rest of Myanmar protested against the involvement of a foreigner. The Commission published an interim report in March 2017 and the final result of its work at the end of August that year.

Almost simultaneously with the release, there was another and more coordinated attack by rebels on a number of police stations in the predominantly Muslim areas on the border with Bangladesh. The group is called Arakan Rohingya Salvation Army (ARSA). According to the government11 security guards and one government official were killed. The government then declared ARSA a terrorist organization. Burmese security forces launched counter-actions, claiming they killed a number of attackers and arrested others. These events sparked a new wave of refugees from Muslims living in the three administrative districts bordering Bangladesh. Up to 300,000 people had fled by September 11, 2017. That would mean that almost a third of the Muslim population living in Rakhine would have fled.

At this point in time, the number already exceeded the number of refugees in the earlier mass exodus of 1977/78 and 1992/93, when around a quarter of a million people each crossed the border within a short period of time. Most of them returned after negotiations between the governments of neighboring countries, which were accompanied by international organizations. Nothing has changed in the fate of those affected. They are viewed as illegal immigrants or their descendants by both the Myanmar government and Bangladesh. The overwhelming majority are stateless.

According to ehealthfacts, in an interview with the Myanmar government published on August 28, 2017, a leader of the rebel movement declared the “open war” being waged to “restore” the citizenship of the Rohingya. Like other representatives of the Muslim group, the Rohingya leader states that the Muslims have lived in the country for centuries and that they built the country together with Buddhist leaders. This claim has been denied by representatives of the Buddhist Rakhines and the Myanmar government. They see the “Muslims in Rakhine”, as they are officially called, as the descendants of migrants from Bengal and are demanding that they register as such under the 1982 citizenship law.

On September 9, 2017, ARSA announced a four-week ceasefire to enable humanitarian aid for those affected. The government said it did not negotiate with terrorists. Aung San Suu Kyi had previously stated that the media would spread an “iceberg of lies”. The UN High Commissioner for Human Rights Said Raad al-Hussein spoke in Geneva that everything would look like a prime example of ethnic cleansing.

With such black and white rhetoric used on all sides, the prospects of reducing the suffering of the refugees and resolving the conflict as the Annan Report seeks have diminished again.

On September 19, 2017, Aung San Suu Kyi gave a speech to the Diplomatic Corps in Naypyidaw to comment on the events in a 25-minute speech in English that was broadcast on television and on screens in some cities (note on the link: He shows the coverage of Myanmar television in full length and gives an impression of its typical Burmese ceremonial context (the long pauses at the beginning are part of it).

In her speech she did not comment on the current allegations against the security forces – burning down villages, murder, rape, etc. – but emphasized the readiness of her “young democracy” to investigate recent events and to punish any crimes against humanity. Above all, she called on representatives of the international community to work with the government. “Participate!” (Join us) was a frequently repeated appeal.

She also pointed out that the armed forces had stopped “clearance operations” on September 5, 2017, and that all refugees could return if it was proven that they had recently fled. She referred to the rules that had been drawn up under international supervision in 1993 after the last mass exodus.

The reactions to the speech were different. Her followers, who saw the speech on their screens, supported her with words such as “We stand by you, Mother Suu.” Critics were contradicting each other, saying that she had avoided the critical points of the current crisis. The appeals that had already been made that she should return the awards she received were repeated. On October 28, 2017, the day of her meeting with Pope Francis, her Freedom of the City of Oxford Award, which had been presented 20 years ago, was revoked after students had previously arranged for her name to be derived from a room in the university in which she had studied was removed.

From November 27 to December 2, 2017, Pope Francis visited Myanmar and Bangladesh for three days each. The trip had been planned before the Rohingya crisis attracted worldwide attention after the events of August. The focus of public interest was then how he would behave in the conflict, exaggerated when he asked whether he would use the word “Rohingya”, which is frowned upon in Myanmar. On the advice of his Myanmar advisers, he did not do so, disappointing many critics of the Myanmar government. He met the commander in chief of the military and his advisor for a quarter of an hour in Yangon and Aung San Suu Kyi in the capital Naypyidaw. On the occasion he gave a general speech.

Shortly after the speech, negotiations began with Bangladesh that ended with an agreement signed in Yangon on November 23, 2017. This regulates the details of the planned repatriation. The cooperation of the UN refugee agency UNHCR is planned. The condition for the return is the proof that the refugees lived on the national territory of Myanmar. The details are to be regulated by a working group.

Based on the report of a UN commission of inquiry into Myanmar, the International Criminal Court initiated preliminary investigations against Myanmar for the expulsion of the Rohingya minority in September 2018. Myanmar’s government has so far refused to cooperate with UN investigators and has not allowed observers to enter.

In June 2019, around 740,000 Rohingyas were living in refugee camps in Bangladesh. An agreement for the return was signed in late 2017 between Myanmar and Bangladesh – however, appeared as early as November 2018 failed. Repatriation is considered dangerous and a permanent solution to the problem is not in sight. The UN accuses itself of not properly assessing the situation in Myanmar in recent years and of having failed. The last attempt to return 3,500 refugees failed at the end of August 2019.

On December 5, 2020, Bangladesh began to relocate more than 1,600 of the more than 1 million Rohingyas who had fled to an offshore island. The place is considered inhospitable and often hit by monsoons or cyclones. The island should offer space for up to 100,000 people and have a suitable infrastructure. International organizations criticized the resettlement and the lack of transparency about the conditions there.

On June 21, 2019, the Myanmar government decreed an Internet blockade in Rakhine State and neighboring Chin State. It is not clear when the internet will be available again. A communications ministry spokesman said the Internet would be accessible “when peace and order are restored to the region”.

In the public discussion about the Rohingya, ethnic-religious causes are mainly cited. But, as in other conflicts, it is also about massive political, economic and geopolitical interests of all actors involved. More about the background of the Rohingyas on this page under ethnicity and religion in the section society. 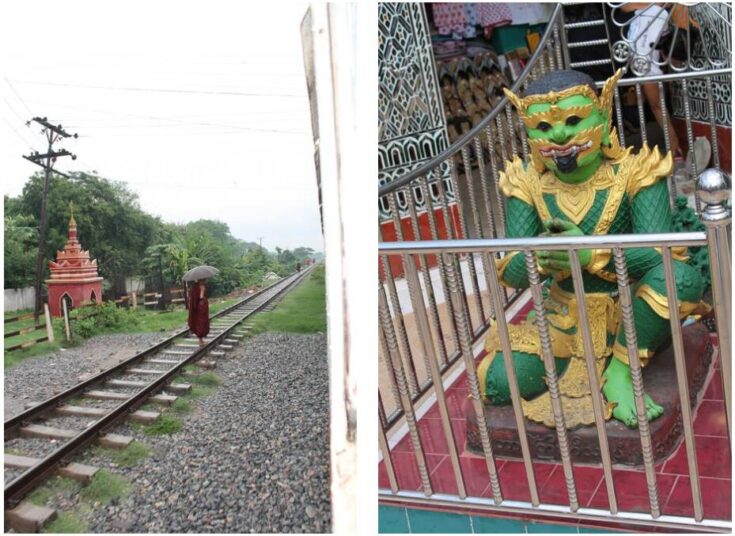