Against the background of the numerous wars between the kings of Siam and Burma, relations between the two countries are traditionally tense, as can be seen in the portrayal of the other country in the history books of Thailand and Myanmar. The background to the rivalry is the question of who, according to the Buddhist model of rule, is in control of the region. The white elephants found in the respective empire were a visible symbol of superiority. Against this background, the rejection of the request by the Thai government to lend one of the eight white elephants in Myanmar to the Chiang Mai zoo on the occasion of the 65th anniversary of the establishment of diplomatic relations between the two countries receives a special note.

More recently there have also been military tensions, partly sparked by the activities of rebel armies on the border and exacerbated by the erection of statues of heroes in the wars between the two kingdoms on the borders.

On the other hand, Thailand has been very heavily involved in Myanmar economically since the neighboring country opened up economically in 1988. For example, the natural gas deposits in the Yadana field in the Gulf of Martaban reach Thailand via a pipeline. The construction of the deep sea port of Dawei (Tavoy) is also taking place with the participation of Thai companies.

According to ethnicityology, relations with Myanmar’s two major neighbors go back a long way. There are traditionally good relations with India because India is the homeland of the Buddha. After independence, Prime Minister Nehru supported his friend U Nu and the Burmese army with weapons against the insurgents. On the other hand, the ongoing discrimination against descendants of Indian immigrants has also strained relations.

Because of China’s support for the Burmese Communist Party, relations with its eastern neighbor were strained for many years. There were also border disputes, which were only resolved through a contract negotiated by General Ne Win in 1961. After 1988, China gave the military government massive support with arms deliveries. In addition, border trade from Yunnan increased sharply until 2018. Chinese merchants, especially in Mandalay, have expanded their economic influence, which has led to strong anti-Chinese resentment. At the end of 2019, border trade between Myanmar and China collapsed dramatically. The reasons for this are both economic and political.

China also uses religion for diplomacy towards Myanmar. A Buddha’s tooth in Beijing was exhibited in Myanmar during the time of U Nu and then several times after 1988, with the country’s population making a pilgrimage to the respective places of the relic. The military junta built the Swedawmyat Pagoda in the 1990’s, which contains a replica of the tooth. The original is in Beijing.

The Japanese occupation of Burma was one reason why Japan became particularly involved here after the Second World War, especially in the field of development aid. Between 1962 and 1988 Japan was Burma’s most important economic partner, ahead of the Federal Republic of Germany. After India, China and Thailand, Japan is now the fourth largest buyer of goods from Myanmar, while Japanese exports to the country rank behind South Korea. It plays a role here that Korean soap operas are just as popular in Myanmar as in other Asian countries, which has boosted the export of women’s clothing, for example. Myanmar has had relations with North Korea again since 2007. They were canceled after agents of the country carried out an attack on the President of South Korea and his delegation on the Burmese Martyrs Day (July 19) in 1984. It has been speculated that Myanmar is working on a nuclear program with the help of North Korea.

Most of the export trade has so far been handled via the port of Yangon. There are also ports in Sittwe (Rakhine State), Pathein (Ayeyawady Region) and Mawlamyine (Mon State). A large deep-sea port is planned in Dawei. The project was temporarily stopped in 2013 for various reasons.

The conditions for domestic trade have been greatly improved by the numerous roads and bridges that have been built since 1988. But the infrastructure is still weak. It is particularly noticeable that, in contrast to all neighboring countries, Myanmar is neither connected to its neighboring countries by a railroad nor a developed road connection. Together with the UN organization ESCAP (Economic and Social Commission for Asia and the Pacific), the government has ambitious plans to expand trade routes within the country as well as connections to neighboring countries. There will be negative social and ecological consequences, which could lead to new conflicts in the region.

The most important partners in foreign trade are China, Thailand, India, Singapore, Malaysia, Indonesia, Japan and South Korea. In 2019, the trade deficit rose to US $ 6.1 billion compared to the previous year. Foreign trade amounted to US $ 44.1 billion (US $ 25.1 billion imports and US $ 19.0 billion exports). Compared to 2018, imports rose by 10.8 percentage points in 2019. 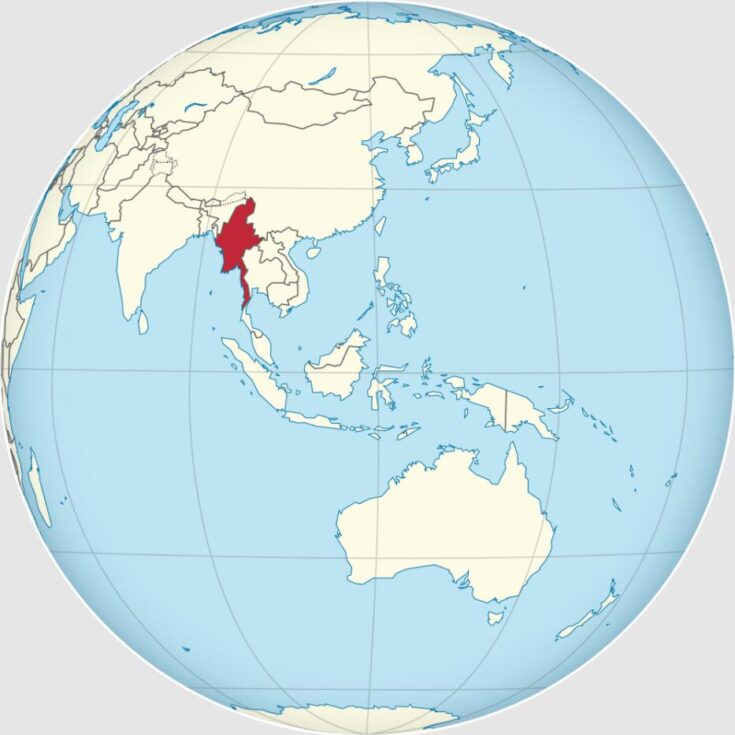