All the governments of independent Burma / Myanmar have faced interrelated political challenges that they have not been able to meet, as has the incumbent government. These challenges include the creation of national unity, a distribution and use of the country’s resources that is perceived as just, the creation of a reliable and resilient legal system, the guarantee of basic civil rights and the establishment of good relationships with the other members of the international community.

The present double problem arose shortly after independence was achieved in January 1948. Shortly afterwards a civil war began, which was started by communist rebels and soon after by the ethnic Karen. Later rebels from other ethnic groups joined in, who fought for more autonomy and who only agreed to reject the respective central government. To date it has not been possible to establish a basic consensus on the political system within the ethnic majority, nor has the diverging interests of the various ethnic groups living in the country been adequately taken into account. The reasons for this go back to colonial times.

The British introduced a dual administration of Burma. The Burmese Buddhist heartland and Rakhine were ruled directly, with forms of democratic self-government introduced from 1922. Most of the ethnic groups in the mountains surrounding the heartland, however, retained their traditional structures of rule. Here, the system from the pre-colonial period was adopted, in which the king had to be sworn loyalty in the respective metropolis. The political reforms in the heartland were rejected by the Burmese nationalists, so that after the war there was no consensus on a sustainable political system, but – in the tradition of the court intrigues of the royal era – only a struggle for unrestricted rule.

The ethnic conflicts were defused after the military coup by signing ceasefire agreements with numerous rebel groups. The rebels renounced the fight against the government troops and received in return the right to independent use of the resources in their sphere of influence. The fighting that broke out again in Kachin State in 2011 shows how difficult it is to convert the ceasefire into lasting peace agreements. The same applies to the establishment of a democratic parliamentary system in which changing majority decisions are conceivable and peaceful changes of government take place.

In addition to the struggles for the use of resources in the areas populated by ethnic minorities, the accusation of economic dominance by Indians and Chinese living in the heartland has played a prominent role since the colonial era. Members of both groups had come to the country in large numbers during the British colonial period, with the Indians playing a special role until World War II. The 1931 census found that they were the majority of the population in Rangoon, while only a third of the residents were Burmese. During the Second World War, many Indians left the country, after independence their economic scope was severely limited by a policy of nationalization. In the wake of economic liberalization after 1988, ethnic and naturalized Chinese gained the upper hand economically. The border trade with China has grown rapidly and the economy in the Mandalay area is dominated by Chinese. The Chinese government has long been a strong supporter of the junta. It has been suggested that this could create tension after the change of government. That does not happened, as the visit Aung San Suu Kyi was in China in November 2017th

During the rule of the military junta, some Burmese also managed to set up commercial enterprises that are active in several branches of business, but which are not well respected because of their real or only suspected proximity to the former military rulers. Finally, in rural areas, as in the past, there is a problem of growing landlessness among farmers due to excessive indebtedness and the uncertain legal title of the cultivated land.

According to constructmaterials, the Myanmar military junta has been charged repeatedly with blatant human rights violations until recently. The allegations mainly relate to the harsh sentences against the regime critics. A leader of the 1988 uprising, known under his pseudonym Min Ko Naing(“The King Falls”), who stayed in the country unlike many other protesting students, was sentenced to 20 years in prison in 1989 for violating a section of a 1950 law enacted during the Civil War criminalized activities that endanger the state. He was then released under an amnesty after 15 years. In 2008 he was sentenced to 65 years in prison for violating various laws for his role in the protests that preceded the monks’ demonstrations. He was then released in January 2012 as part of an amnesty issued by Thein Sein.

After a visit to the country in early 2003, Amnesty International found that the main problem in the country was legal uncertainty, as laws from different epochs of Burmese history – some of them from the colonial era – could be applied at will. In addition, as in many other countries, there is no independent judiciary.

From 1988 until the end of March 2011, Myanmar was ruled under martial law, which means that basic civil rights were radically restricted. This applied, among other things, to the freedom of assembly and expression. Any form of public protest could be punished. Press organs and publishers have had to submit all printed matter to the censorship authority for approval since the time under the “Burmese Road to Socialism”. This censorship was first greatly relaxed after President Thein Sein took office and lifted in August 2012.

In July 2012, the Interior Minister issued implementing provisions for a law passed the previous year, according to which peaceful protests in the country are possible. Further concrete steps to regulate the fundamental rights enshrined in the constitution are still pending. 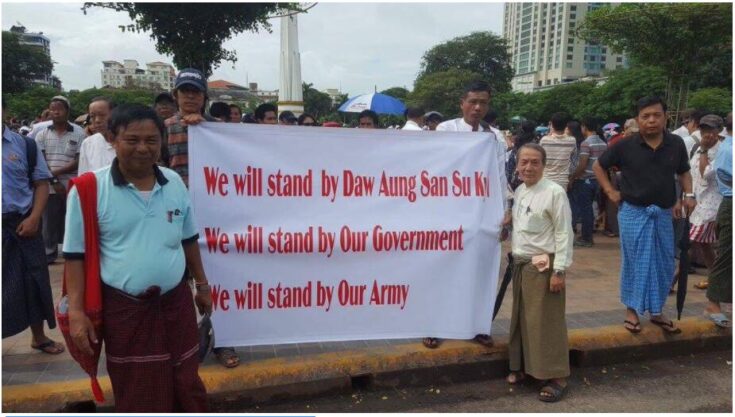