According to areacodesexplorer, Myanmar is the largest country in mainland Southeast Asia. It is rich in natural and cultural treasures and one of the most ethnically diverse societies in the world. Formerly a kingdom, a British colony, then a longstanding military dictatorship with many ethnic conflicts, the country has been in a process of democratization and peace since 2011, which is still grappling with numerous social and political problems.

The census, which was supported by the United Nations at the beginning of 2014 and is highly controversial, showed a total population of 51,486,253 (24,824,586 men and 26,661,667 women) according to the figures published in May 2015. In areas where the census was not carried out due to the ongoing ethnic conflict, the figures were estimated. Numbers on ethnic and religious affiliation were initially not published because they were considered too sensitive. Religious affiliation figures were only published in 2016. To date, data and figures on ethnicity are not available to the public. The population growth rate has been less than 1 percent in recent years.

General basic information can be found, for example, at the Federal Foreign Office and the CIA World Factbook. Official statistics and reports from the Myanmar side are available from the Myanmar Ministry of Labor, Population and Immigration. The Encyclopaedia Britannica offers comprehensive information on the ethnically and religiously diverse society, political system, culture and history of the country.

There are plenty of recent Myanmar travelogues on the internet. Most emphasize the extraordinary friendliness of the residents. This corresponds to the tenor of the older travelogues. – A beautiful collection of photographs that capture the charm of Burma at the turn of the 19th and 20th centuries was made by the German photographer Philip Alphonse Klier.

The inaccessible mountain regions form the border to neighboring countries. This fact is often cited as a reason why Myanmar had little political contact with the outside world for a long time.

South of the 19th parallel begins the zone in which the monsoons from May to October from the Indian Ocean fall (1.5 to 2.5 m per m² and year) and thus provide the basis for natural irrigation of the soil. North of this border up to about the 23rd degree of latitude falls far less precipitation (0.5 to 1 m) because of the up to 3000 m high Rakhine (Arakan) mountains. Artificial irrigation is necessary here.

The two zones are usually referred to as Unter- and Oberbirma. Upper Burma is the original settlement area of the Burmese, who founded their first empire here in the 11th century with the capital Bagan. In doing so, they took over existing irrigation techniques for growing rice and developed them further. Sub-company was settled by the Mon Because of its location by the sea, international sea trade has always played a major role here. Both parts of the country are culturally shaped and have had a political life of their own for a long time. The capital, Naypyidaw, newly established in 2005, lies on the border between the two zones of the country.

In the west of the country, behind the Rakhine Mountains, is today’s state of Rakhine, which was a kingdom in its own right for centuries. To the north of it are the Chin Mountains. The second highest mountain in Myanmar is located here at 3,200 m. The mountains bordering Bangladesh and India are very rugged and difficult to access. In the north of the country are the Kachin Mountains, which form a foothill of the Himalayas. The population density here is as low as in the Chin Mountains. The highest mountain in Southeast Asia at 5,881 m, the Hkakabo Razi is located in the north of the country on the border with India and China. The first attempt was not made until 1995 to climb it. A year later, the attempt by a Japanese man and his companion from Myanmar was successful. To the east follows the Shan Plateau with an average height of 1000 m. To the south of it begins the Tenasserim Mountains, which extend over the Malay Peninsula to Singapore and form the border between southern Myanmar and Thailand.

Another mountain range stretches for more than 400 km from the famous Mount Popa (1,518 m) near Bagan to Singuttara Hill in Yangon, on which the country’s most important pagoda, the Schwedagon, is located.

Myanmar is rich in mineral resources and natural resources: oil, natural gas, coal, zinc, tin, lead, iron, copper, marble and numerous precious stones. Due to the political situation, however, this wealth does not benefit the population, but promotes much more existing and new conflicts. In recent years, the gas deposits that have been discovered off the coast of the country in the last few decades have become the focus of attention. The jade mining in the Kachin Mountains is a prime example of the exploitation of the land by national elites and international companies.

The Letpadaung copper mine also attracted national and international criticism. The wealth of the country was, as it is today, highly ambivalent. Details can be found under “Economy and Development”. 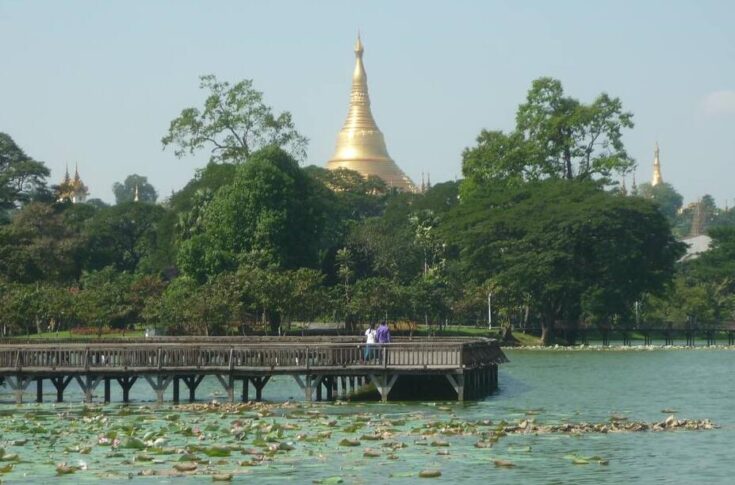