Official name: Republic of the Union of Myanmar

The longest and most important river in the country is the 1,800 km long Ayeyarwady, which rises in the Tibetan highlands, temporarily forms the border between Myanmar and China, then flows in sometimes deep and picturesque gorges through the Kachin Mountains before reaching the plain, and forms a large delta in sub-company, the nine arms of which flow into the Gulf of Martaban, an extension of the Andaman Sea. The Irrawaddy dolphins, which are also found in the Mekong in Laos and Cambodia, are a special attraction. Its largest tributary is the Chindwin, which rises in the Kachin Mountains. The Ayeyarwady is navigable as far as Bhamo. The Myitsone Dam, which has been planned with Chinese support since 2001 on the upper reaches of the river is the subject of heated political controversy. Work on the dam was then suspended at the end of September 2011 until further notice. After the NLD’s election victory in November 2015, the discussion about the building was rekindled. – In 2015, after heavy rains, the river overflowed its banks in many places, causing severe damage. This resulted in a huge wave of willingness to donate across the country.

The Thanlwin (Salween / Saluen) rises near the Ayeyarwady. It cuts through the Shan highlands, forms part of the border between Thailand and Myanmar, branches out into a small delta at the end and flows into the Gulf of Martaban after 2,815 km near the capital of the Mon state Mawlamyine (Moulmein). In China, Thailand and Myanmar, dams are also planned for the upper reaches of the Thanlwin, the planned construction of which has sparked controversy.

A smaller river is the Sittaung (Sittang), which has its source in the Shan Plateau and flows into the sea between Ayeyarwadi and Thanlwin. The Sittaung Basin is separated from that of Ayeyarwady by the Bago (Pegu) Mountains.

Inle Lake in Shan State is the most famous lake in Myanmar due to its attractiveness for tourists. It lies at an altitude of 880 m, is 116 km² in size and at its deepest point less than 4 m deep. Alongside agricultural use, tourism and the spread of water hyacinths, this is one of the reasons for its ecological endangerment. The largest lake in the country is Lake Indawgyi in Kachin State.

With the exception of the high mountain regions in the north, the climate is tropical and subtropical. Central Myanmar has three seasons. The cool season, characterized by southwestern monsoon winds, extends from late October to mid-February and is therefore the best time to travel for western tourists. The temperatures in Yangon are between 18 and 32 degrees. The hot time between the monsoon winds follows between February and April, when the thermometer in the largest city rises to 40 degrees. The rainy season of the southwest monsoons then lasts from May to October. The temperatures are around 30 degrees. It is much cooler in the higher regions. In Pyin Oo Lwin (Maymyo), the summer residence of the British during the colonial period, the temperature rarely rises above 30 degrees even during the hot season.

The most diverse natural spaces – lowlands with fertile delta areas, coastal landscapes with mangrove forests, tropical rainforests, vast arid areas in the interior, the mountain regions at the national borders, as well as the different climatic zones – provide the basis for a very large ecological diversity:

As in the rest of tropical Asia, most of Myanmar’s vegetation consists of two types of tropical forest, the monsoon forest and the tropical rain forest. In the monsoon forest, leaves fall off during the dry season to reduce water consumption, while the tropical rainforest remains evergreen. Monsoon forest dominates between Yangon and Myitkyina in Kachin State, tropical rainforests exist south of Mawlamyine (Moulmein) with a number of overlaps. But evergreen subtropical dry forest can also be found in Myanmar, north of the Tropic of Cancer, up to an altitude of 2,000 m. There are mangroves on the coast of the Ayeyarwady Delta whose existence is threatened. These include timber such as teak – 75% of the world’s reserves grow here – other hardwoods and large bamboo forests form the basis for traditional house construction. The export of teak was reorganized in 2014. Nevertheless, trees are still illegally felled and exported, especially along the long Chinese border.

The fauna is also extraordinarily diverse. In the north, animal species from the Indo-Chinese region dominate, in the south those from the Malay Peninsula. It is estimated that there are a total of 1,000 species of birds. There are relatively large, but decreasing, numbers of wild elephants and tigers. On the other hand, because of the good price for their horns on the Chinese market, rhinos appear to have been extinct in Myanmar as well.

According to a2zgov, there are numerous national parks and reserves in Myanmar that protect flora and fauna. 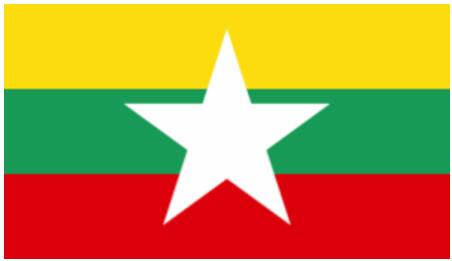