Most of them live in Shan State and ethnologists class them as part of the Karen groups. A good half a million people belong to them. A political organization and its own army fought against the government until 1991. An armistice gave them economic concessions, including in the tourism sector. A reorganization took place in 2009.

The various groups that are grouped under this name form the second largest ethnic minority in Myanmar after the Shan. Settlement areas are the mountainous regions on the border with Thailand – around 400,000 Karen live in the neighboring state – and mainly the Ayeyarwady Delta. The majority of the originally animist Karen are Buddhists, a minority Christians. The majority of them include the political leaders of this ethnic group. One of them, Dr. San Si Po, wrote a book in 1928 that called for separate administration for the Karen and the Bamar due to their different cultures. During the Second World War, numerous Karen fought in the British Army against the Japanese and their Burmese allies under Aung San’s leadership. After the war, however, Aung San was still regarded by numerous Karen as the leader of an independent Burma, partly because his wife – Aung San Suu Kyi’s mother – comes from this ethnic group. After Aung San’s assassination and independence, the Karen political organization beganKNU (Karen National Union) started a struggle for an independent state called Kawthoolei. It wasn’t until January 2012 that a provisional ceasefire was signed with the Myanmar government.

One of the most famous kayin is Bo Mya(1927-2006), a rebel leader and KNU leader from 1976-2000. Its headquarters in Manerplaw (Field of Victory) was on the border with Thailand and was the center of the Burmese opposition until the conquest by the Burmese army in January 1995 after the Buddhist Karen battalions split off. Bo Mya himself was a 7-day Adventist who began his career in the British Army fighting the Japanese and Aung San’s army. In 2004 he traveled to Yangon and negotiated a ceasefire with Khin Nyunt. There was some kind of gentleman’s agreement, but no real peace. Under his leadership, the Karen have long controlled the border trade between Thailand and Burma and collected duties on goods sold on the black market in Burma.

The Kayah are ethnologically related to the Karen. According to homosociety, the recognition of the Union of Myanmar as an independent state – a good quarter of a million people live in Kayah State – the ethnic group owes to an agreement between a Kayah leader and the Burmese King Mindon in 1875, which was recognized by the British and guaranteed autonomy for the area. On this basis, the Kayah, also known as Karenni (“red Karen”), saw themselves as an independent state that was incorporated into the Union of Burma against its will. Here, too, there was armed resistance against the central government for a long time. Due to the work of Italian missionaries in the 19th and 20th centuries, the Catholic Church plays a special role here.

They belong to the Tai peoples and speak a language similar to that of the Thais in the south of Shanland. In the past, the Shan land consisted of a number of small principalities under the rule of a sawbwa. (Saopha). At the Panglong Conference in February 1947, held in Shan State, representatives of the princes agreed to join the Union of Myanmar. The Sawbwas retained some of their previous privileges, which were then abolished in 1960 by the transitional government under General Ne Win. The population structure and history is just as diverse as the cultural and economic situation. The state is a focus of German development aid. Among other things, wine has long been cultivated and successfully marketed here through a German private initiative.

The historical connection of this Muslim group with Burma / Myanmar is highly controversial. Speakers and supporters of this group say that the ancestors of the Rohingya have lived in what is now Rakhine since the 7th century, so to a certain extent they belong to the original residents. In 1799 the word “Rohingya” was first used for an old-established population in Rakhine as “Rooinga” (= resident of Arakan, today Rakhine) in the “Journal Asiatic Researches”. Officials in Myanmar and especially the majority of the Buddhist residents of Rakhine (and all of Myanmar) see them as illegal immigrants from what is now Bangladesh. The Rohingya were denied recognition as an “ethnic nationality” under the ” Burma Citizenship Law ” of 1982.

In the 2014 census, in contrast to originally planned, no category “Rohingya” could be entered when specifying ethnicity. In Buddhist Burma they are called “Bengalis”. Like other Muslims, they are seen as opponents of radical Buddhists. The fact that monks also demonstrate against this group makes it difficult for the government to find solutions that are accepted by the international public. Aung San Suu Kyi did not take a clear position on this issue either.

More on the current conflict on this page under “Armed Conflicts and Peace Efforts” in the “History and State” section. 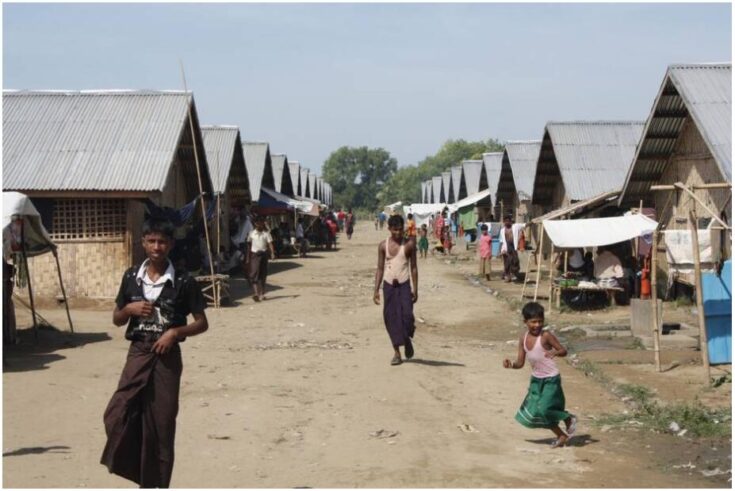 The war in Afghanistan is the term for the political and military conflict in Afghanistan that began when the United States launched the military campaign Operation Enduring Freedom (OEF) on October 7, 2001, with a particularly heavy south. The goal was to hit al Qaeda and the Taliban. The background was the terrorist attacks against […]