Since the classification of the Burmese population carried out in the colonial times, which determined a number of 135 ethnicities, this number has persisted until today. Of these, 52 subgroups are said to belong to the Chin ethnic group in the west of the country. The ethnic diversity implied by this led early on to describe Burma as a “paradise for ethnologists”.

Linguists differentiated into three major language groups: Tibeto-Burmese, which mainly includes Burmese, the related dialect spoken in Rakhine, and the languages of the larger ethnic groups (Kayin, Kachin and Chin). Tai languages ​​related to Thai are also spoken, especially by the Shan, and finally there are members of the Austro-Asiatic (Khmer-Mon) language family, of which Mon is culturally the most important. The “relationship”, however, is a linguistic construction that says nothing about whether the members of these “families” can communicate linguistically or even appreciate each other.

The lack of a common identity leads to distrust between the individual ethnic groups. On the part of the Bama Buddhist majority in the country, there are particularly strong and sometimes racist prejudices against Muslim South Asians, from which the Rohingyas living on the border with Bangladesh, but also all other Muslims living in the country, have to suffer, such as those in March 2013 in the Central Burmese city of Meiktila have shown rioting against Muslims.

According to the citizenship law of 1982, which dates back to the time of the country’s independence, only those citizens of the country whose ancestors lived in the country as early as 1813, i.e. before the outbreak of the first Anglo-Burmese war, count among the “ethnic nationalities”. All groups that immigrated later are considered “naturalized”, but this still does not apply to the majority of Rohingyas, who are officially regarded as Bangladeshis and referred to as “Bengalis”.

Reliable figures on the size of the individual ethnic groups are not available, as the last generally recognized census carried out in the country that collected – and published – this information dates from 1931. A census took place in March and April 2014, which should clarify this. The plan was highly controversial as the census was expected to exacerbate ethnic tensions. The first results were presented in August 2014. In July 2016, the figures were published which contain information on the religious composition of the population. The sensitive data on ethnic composition are still not available.

It is extremely difficult to correctly inform about the ethnic diversity of Myanmar, as the descriptions of themselves and others are very different from one another. In the following, an attempt will be made to provide some brief information about the ethnic minorities of the country who live next to the dominant group of the Bama.

The folkloric imagery of ethnic group representatives in traditional clothing shown here comes from an internet presentation by the government and is a visual representation of the official notion of “unity in diversity” in Myanmar, which most ethnic groups do not share.

Together with the Khmer, they are descendants of one of the oldest cultures in Southeast Asia. Their settlement area is in southern Myanmar. According to historyaah, an early center of their rule was the city of Thaton, between Yangon and Mawlamyine. After their conquest by King Anawratha in 1057, according to the Burmese chronicles, the sacred scriptures of Buddhism came to Bagan. At the same time, the royal family and many craftsmen were brought to the capital of the first great Burmese empire. The Manuha Pagoda, named after the defeated Mon king, is one of the sights of today’s Bagan. It stands for the strong influence of the Mon on the religion and culture of the Bamar.

A later center of the empire ruled by the Mon kings was the city of Bago (Pegu, Hanthawaddy) for a long time. Because of the wars with Burmese dominated kingdoms, many Mon fled to neighboring Siam, where there are still many Mon settlements north of Bangkok today. In Myanmar, they have largely assimilated, but try to preserve their linguistic and cultural identity. There is currently no precise information about how many residents of the country still call themselves “Mon”.

One of the most famous kings of the Mon was Dhammazedi (1412-1492). He was the ruler of an empire in Unterfirma with the city of Bago (Pegu) as its center. The empire was one of several on the soil of Myanmar after the fall of Bagan and before the beginning of the second Burmese empire under Bayinnaung. Dhammazedi was an ethnic Mon, but had lived for a time at the Burmese royal court of Innwa (Ava) in Upper Burma. He is considered to be one of the fairest rulers on Burmese soil. He was a monk until his accession to the throne as the successor to a queen. He renewed Buddhism and made new contacts in Sri Lanka. Bago was then a coastal town. The empire of Bago lived mainly from international trade. The Dhammazedi Bell,which is considered the largest in the world, was cast in 1484, allegedly weighed 290 t, was brought to the Schwedagon Pagoda and stolen there at the beginning of the 17th century by the Portuguese mercenary de Brito, who wanted to have cannons cast from it. The ship that carried the bell sank. All previous attempts to lift it have failed. De Brito lost the war and was impaled for desecrating Buddhist monasteries. 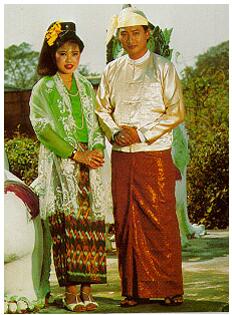 Media Even before censorship was loosened after President Thein Sein took office, there was a wide variety of press. Around 100 weekly newspapers and many monthly magazines reported on a wide range of topics, including current political and economic developments. However, only the state-controlled newspapers Myanma Alin (New Light of Myanmar) and Kyemon (Spiegel) appeared […]

A new constitution came into force in 2004 to replace the old one from 1964. The former constitution had in practice been in force since the fall of the monarchy in 1973. In the period 1978-87, the country was a people’s republic following traditional Soviet pattern, and from 1992 an Islamic Republic, which from 1996 […]