According to extrareference, Burma has been around since 100 BC. The most important trade route between India and China. Burma’s pre-colonial economy was essentially a subsistence economy, with the majority of the population involved in rice production and other forms of agriculture. Colonial rule interrupted the traditional mutual relations between the landed gentry and the peasants. During the British rule, Burma was the second richest country in Southeast Asia after the Philippines. When Burma gained independence from Great Britain in 1948, it was the world’s largest exporter of rice.

Against the background of the struggle for independence against the British colonial power and the economic form of laissez-faire capitalism introduced by it, the economic plans of the Burmese governments were shaped by socialism until 1988. Nu tried from 1954 under the name Pyidawtha (Happy Land) to establish a welfare state in which economic growth was combined with state-funded social programs. The plan envisaged an independent, but not entirely self-sufficient, economy. He thus linked to the times of royal Burma, when the king had the monopoly over all important resources of the country. Nu’s program also claimed, in the sense of utopian socialism, to give people the economic basis for a spiritual life on the basis of Buddhist ideals and should therefore primarily serve to pacify society. This concept of a “Buddhist economy” influenced the British economist EF Schumacher and contributed significantly to his work “Small is Beautiful”.

After the military coup of 1962, a strictly socialist planned economy was introduced under Ne Win, with the aim of abolishing the “exploitation of man by man”. It was like the Pyidawtha-Programme, structured top-down, required a high degree of bureaucratic coordination and almost completely decoupled Burma from global markets. Ne Win’s “Burmese Road to Socialism” was an isolationist policy that nationalized all industries and promoted self-sufficiency. This economic policy accelerated the process of transforming a resource-rich country into an economic disaster. A few years after the program began, Burma had to import food to save the population from starvation. One of the main reasons for the general dissatisfaction that sparked the riots of 1988 was that, at the request of the Burmese government, the country was accepted into the group of Least Developed Countries (LDC). This status was a prerequisite for further economic aid from the international community and offended Burmese national pride.

When it came to power in 1988, the military junta announced a departure from the previous economic principles and announced market-based reforms aimed at strengthening the domestic private sector and promoting foreign investment. The new government’s paradigm shift was not implemented consistently – there was a modest expansion of the private sector, some foreign investment was allowed, and the country received much-needed foreign exchange – it nonetheless led to strong economic growth of over 10% after 2000.

However, the growth was accompanied by a high rate of inflation – some estimated more than 40%. In addition, the economy suffered from the maintenance of a double exchange rate, which since 1977 had been fixed with small fluctuations at the ratio to the dollar of 6: 1. The real rate, which was valid in the country itself on the semi-legal market, rose to over 1: 1300 in 2008 and then only fell as a result of government intervention. It wasn’t until April 2012 that the central bank officially set the rate at 1: 818. Changes to the course are now announced daily. Since then, the kyat has steadily declined in value and at the beginning of 2018 was 1: 350 above the “semi-legal” rate of 2008. 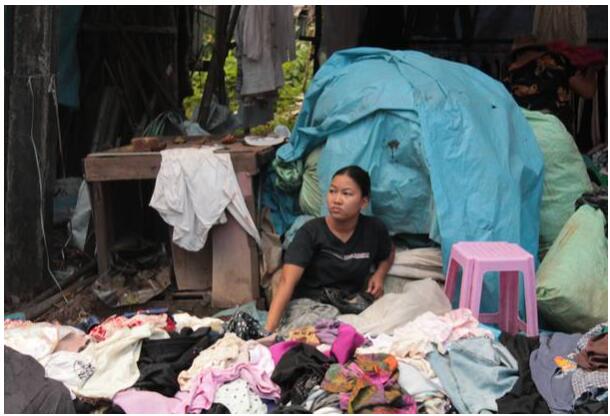 At the beginning of the 20th century, Max Weber predicted in his pioneering studies on the sociology of religion that in the countries of “old Buddhism”, i.e. those in which Theravada Buddhism predominates, no inner-world economic ethics are to be expected due to its “otherworldly character” As found in Protestant Christianity or Confucianism. The previous economic history of Burma / Myanmar fits this forecast. In colonial times it was British and other Western foreigners, Indians and Chinese who dominated the economy and banking After independence, the ethnic Burmese failed to organize conditions for a flourishing economy.

In this context, the Buddhist tradition of giving (dan a) to monks, monasteries and for religious festivals should be mentioned. According to estimates from the 1960’s – there has been no empirical research on this subject since then – 20-40% of family income in rural areas was spent on religiously motivated gifts in order to gain merit with regard to one’s own future life. Of course, this also has economic implications, since the given goods must also be produced. This ” dana-Wirtschaft “has not yet been researched. The same applies to the more important question raised by Weber, what effects this attitude has on attitudes towards making money, longer-term investments and work ethics.

It should also be mentioned that Myanmar is still largely a “ plural society ” (JS Furnivall, 1878-1960). A plural society is characterized by the fact that different ethnic groups live side by side, but do not mix with each other, but – also in economic terms – act separately from each other. In the colonial era, the British, Indians and Chinese dominated. The influence of these groups was severely curtailed after independence without any success.

These considerations mean that there is currently the risk that the quantitatively measurable economic growth, as in the colonial era, will bypass the majority of people mainly working in agriculture and in small family businesses and that, against this background, social unrest will arise again.

Despite government reforms to attract foreign investment and reintegrate the country into the world economy, the standard of living for the majority of people has not improved to this day. The legacy of previous governments’ isolation policies and economic mismanagement – poor infrastructure, corruption, underdeveloped human resources, and inadequate access to capital – remains a major challenge.