The International Monetary Fund (IMF) stated real economic growth for 2017 at 7.6% and expected a positive development due to the recovery of the agricultural sector and expected higher tax revenues under the new government. The inflation rate was 6.8%. The foreign trade deficit remained high.

Spending on the military has decreased in recent years, while the notoriously small expenditure on health and education has increased.

Overall, the future outlook for the economy is assessed as positive, provided that the reform process for society as a whole continues.

For further statistics, all of which are subject to a certain data uncertainty, see those from Germany Trade & Invest.

An estimated two-thirds of Myanmar’s population are employed in agriculture, around a quarter in the service sector and less than 10% in industry. The service sector contributed 41.7% to the gross domestic product, agriculture with 38% and industry with 20.3%.

According to ezinereligion, Burma was the largest rice exporter in the world during colonial times. At the end of the socialist period in 1989, the country’s own consumption – the highest per capita in the world – could only just barely be satisfied. A surplus is now being produced again. The goal of one million tons for export – compared to 2-3 million before the economic crisis in 1930 – has been pursued for several years.

In order to secure the local demand for the basic foodstuff at low prices, the free trade in the product has often been restricted in the past. Like cotton and sugar cane for other reasons, rice is a “ political fruit ”.

This does not apply to legumes. Their cultivation has benefited from economic liberalization. The acreage has increased and Myanmar is now the third largest exporter of these products, most of which are bought by India. Other agricultural products that are exported are woods, grains, sesame seeds, peanuts, rubber, and fish products.

An export-oriented clothing industry in Myanmar started in the mid-1990’s. By the year 2000, the share of the country’s exports increased to around 30%. After 2001, both the rate and production fell due to the boycott policy of Western countries (the US and the EU had been a major buyer), but also due to the expiry of the quotas for clothing set by the WTO at the end of 2004. In addition, production stopped Difficulties in the power supply and other infrastructural problems hindered. Because of the sanctions at that time around 70-80,000 female workers lost their jobs. After the end of the sanctions policy, foreign investments rose again. At the end of 2014 a “Made in Myanmar” label was considered. There are now fears that conditions within the country’s clothing industry will be similar to those in Bangladesh.

Myanmar is one of the largest producers of precious, semi-precious stones and jade, which are mainly found in the north of the country. The mines around Mogok in the Mandalay region are particularly famous. 90% of the world’s rubies come from Myanmar. Gold becomes gold in various places in the country found and broken down using different methods. The use of toxic substances such as mercury and cyanides has led to environmental damage. The jade deposits are of particular importance for the Chinese market. The country’s government has held regular sales exhibitions for 50 years. In March 2011, goods worth almost US $ 3 million were sold. Jade occurs mainly in Kachin State, where the mining mainly benefits local elites (so-called “Cronies” as well as local Kachin elites) and the military. According to a report by Global Witness, in 2014 alone $ 31 billion was generated, which bypasses both the state budget and most of the population. Jade mining is a major contributor to the war in Kachin State, according to the report.

Oil has been mined in Myanmar in the traditional way for centuries in open-cast mines near Ayeyarwady (Yenaungyan and Chauk). It is estimated that the country has reserves of 3.2 million barrels of crude oil and 2.5 trillion cubic meters of natural gas. Internationally, it is one of the smaller countries with these energy resources. According to the CIA Factbook, oil production was 76th and gas production ranked 39th worldwide. The oil reserves are nowhere near enough to meet local needs. 90% have to be imported.

Due to the gas reserves, Myanmar could catch up with other countries in the Asia-Pacific region if the existing resources are expanded further. The commercial use of the Yadana field is a joint venture between the French company Total (31.25%), the American company Unocal (28.25%) and the two state-owned companies PTT (Thailand, 25.5%) and MOGE (Myanmar, 15%) ). Production was also carried out in the Yetagun field and recorded in 2000. The project was planned together with the two state-owned Texaco companies, Premier Oil and Nippon. In 2008 the shares of the two companies were taken over by the Malaysian company Petronas. It has been speculated that these sales were linked to protests against the projects for violating human rights and causing environmental damage in the construction of the pipelines in Myanmar.

The Zawtika field is operated by Thai and Myanmar state companies and production started in 2014. The same applies to the Shwe field, the consortium of which is controlled by two Korean companies. In addition, two Indian companies and again the Myanmar company MOGE are involved. 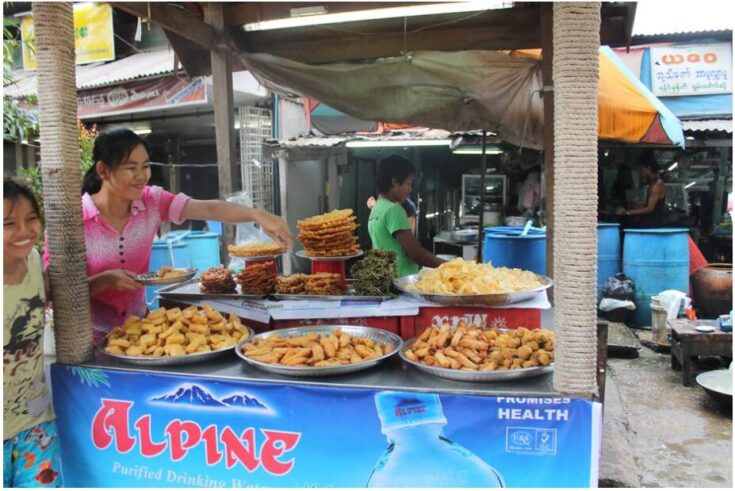