Myanmar’s history shows a sequence of cycles of upheaval, decline and new beginning. Since 2011, a new beginning has been attempted, which was initiated by the country’s military with the introduction of a new constitution, which – even after the election of the Aung San Suu Kyis party in November 2015 – guaranteed the military a significant influence on politics.

According to oxfordastronomy, Myanmar is traditionally described as a country with high economic potential. In the history of the country, however, the opportunities given by the fertile land and natural resources have never been exhausted to such an extent that the majority of the population benefited from them.

“To be a Burmese means to be a Buddhist” – this commonly expressed equation underscores the character Myanmar has undergone through Theravada Buddhism. Pagodas largely determine the image of the landscape and the teachings of the Buddha determine the pace of life. In addition, other religions and cultural influences still have a hard time.

The idyllic picture that earlier travel reports painted of Burma no longer applies in the urban centers and the main tourist areas. Yangon has traffic jams, hotel prices are rising, and life has become more hectic overall.

A number of environmental objections have been raised against the large dams planned in Myanmar as well as against the gas pipelines, recently also within the country itself. These objections are mixed with political concerns, anti-Chinese resentment and allegations of violations of human rights.

Environmental concerns are also raised against the mining of other natural resources, such as the extraction of copper, coal and gold. It is true that this criticism is often linked to political conflicts.

This became evident around the end of 2012 when protests against the construction of a copper mine in Letpadaung in northern Myanmar were cracked down. The protests were directed against feared environmental pollution and the expropriation of land by the Chinese operators of the mine and their Burmese partners. The focus of attention later shifted to the role of Aung San Suu Kyi, who presided over a commission to investigate the incidents, and the role of monks injured in the protests. The report presented by the Commission in March 2013 concluded that the mine should continue to operate under certain conditions. It was discussed in a highly controversial manner. For further protests in December 2014 was protester killed. The conflict continues to this day.

According to research by the FAO, forest cover in the country fell from 56% to 52% between 1990 and 2005 – according to other sources to 47%. This means that the country is still one of the most forested countries in the Asia-Pacific region. In 1993, due to numerous abuses, private trade in precious woods was banned. Since then it has been carried out by a state agency. Despite the controls and the activity of the German forester Dietrich Brandis, which went back to the middle of the 19th century, on the culture of reforestation of teak forests, there is still illegal timber trade, especially on the border with China.

A focus of concern in Myanmar is maintaining the ecological balance of Inle Lake in Shan State. The use of pesticides in agriculture, increasing siltation and pollution due to increased tourism threaten the traditional livelihood of the people around the lake, fishing, and thus also the tourism industry, which is influenced by the arts of the famous “one-legged” Rowers on the lake benefits. The livelihood of the Intha who live by the lake is seriously threatened.

The economic policy of the military government after 1988 was erratic and had no clear line other than the aim of promoting national unity. There was also a lack of expertise. It is still not possible to foresee whether the new governments after the “system change” of 2011 and the change of power in 2015 will be able to create framework conditions that enable sustainable economic growth to be achieved.

On June 19, 2012, President Thein Sein outlined the goals of the new civilian government in a speech. The aim was to achieve economic growth of 7.7% over the next few years, a reduction in the agricultural sector in relation to GDP in favor of an increase in the industrial sector and a tripling of GDP per capita over the next four years. To this end, state-owned companies are to be privatized and foreign investments brought into the country. Citizens living abroad with the necessary experience and qualifications were invited to return to the country. A reduction in the budget deficit was also announced. The goal of economic growth has been achieved, other goals – such as a sharp increase in GDP per capita – not.

In order to boost industrial production, a number of industrial zones or parks were set up as early as 1990, in which companies of different sizes were located. One of the most ambitious was the major “Dawei Development” project in the south of the country. The problem of realizing ambitious projects can be read from it. On November 2nd, 2010 an agreement in principle was signed between the Thai company Italian-Thai-Development and the Myanmar government for the realization of the major project “Dawei Development”. This is a development projectin Tanintharyi (Tenasserim) with the construction of a deep sea port, a 250 km² industrial area and a direct road connection (180 km) to Thailand. Among other things, large power plants, steelworks, fertilizer factories, petrochemical industries and shipyards are to be built. In January 2011, work began on the deep sea port. Due to financial difficulties, they were interrupted shortly afterwards, before the conclusion of a contract with Japan as a third partner in 2015 brought the project back into discussion in a scaled-down form. Another major project is planned in Kyaukphyu in the crisis-ridden Rakhine.

In November 2012, after lengthy deliberations, a new Foreign Investment Law was passed, which enables foreign investments of up to 100% and was largely welcomed by foreign observers.

Aung San Suu Kyi announced a 12-point program of the new government in July 2016, in which the principles of its economic policy were formulated. In line with the government’s focus on national reconciliation, transparency in the use of the country’s resources has been given priority. After a year in office of the new government, observers were skeptical about what had been achieved so far. 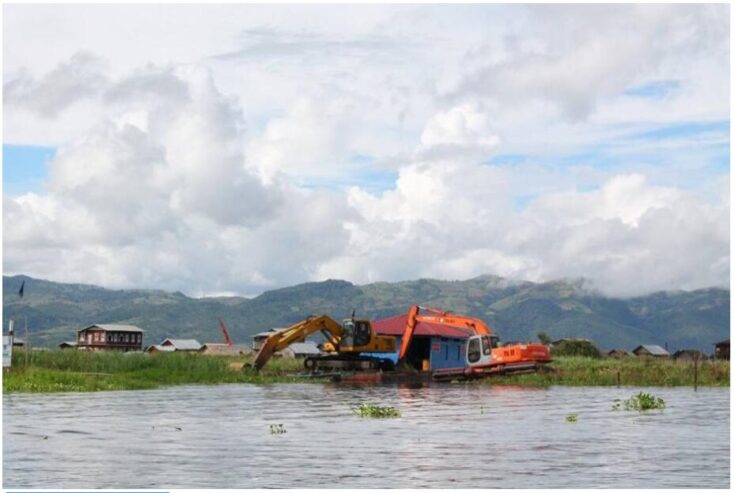