According to franciscogardening, Myanmar has come a little closer to the goal of poverty reduction in recent years. According to a report by the World Bank, the rural poverty rate fell between 2004/2005 and 2015 from 32.1% to 19.4%, and in urban areas from 21.5% to 9%. One focus of the activities is therefore on reducing poverty in rural areas. The regional differences within Myanmar are very high.

After the NLD took over government in April 2016, two new agencies were created to help coordinate foreign aid better; a Development Assistance Coordination Unit (DACU) on the part of Myanmar and the Cooperation Partners Group (CPG) on the part of the international community. One focus should be on improving the infrastructure.

Between 1988 and 2011, Myanmar’s development was largely influenced by its large Asian neighbor, China, after the largest donor to ODA, Japan, stopped its aid after the unrest. In the years that followed, Japan largely resumed aid, following a carrot-and-stick policy, with an emphasis on the carrot. At the same time, there were a number of private Japanese organizations that were and are active in Myanmar. The West, however, limited itself to humanitarian aid because of the boycott policy. The Federal Republic of Germany, for example, supported a number of international activities and German NGOs active in the country and carried out small projects through the embassy in the country.

Here, too, the country performed poorly compared to neighboring countries in Southeast Asia. In 2011, Myanmar received only US $ 8 per resident in international aid. Aid has increased significantly since the new government took office in March 2011. To what extent the help will actually work is open.

From 2012, after the NLD took part in the by-elections in April 2012, the western sanctions were gradually suspended. The EU lifted them in April 2013, with the exception of the arms trade ban. The Paris Club, a community of international lenders, decided in January 2013 to cut Myanmar’s debt by over half. A total of $ 6 billion in debt was canceled. Japan also decided to grant the country new loans.

Up until 1988, Burma was a focus of German development cooperation. In addition, loans were given, which resulted in considerable old debts, which, however, can now be partially waived against the background of the recent resolutions of the Paris Club. Around 546 million euros, which makes up about half of Myanmar’s total debt to Germany, were waived. This provides a basis for including the country again in Hermes export credit insurance. After the sanctions were suspended, Germany was also preparing to resume development cooperation in coordination with other European countries. In 2012, a number of test missions traveled to the country with help for the Banking sector and vocational education. Among other things, it was decided that experts should again be sent to the vocational training center in Sinde in Mittelmyanmar, which was set up with German help before 1988. At the same time, a nationwide TVET program of the Ministry of Education is to be supported. Of the many projects funded before 1988 – with the help of funds made available by the Kreditanstalt für Wiederaufbau (KfW) – the railway workshop near Mandalay is being funded again.

In addition to Bread for the World – Evangelical Development Service and Misereor, which have always brought aid into the country – initially through the country’s churches – the German NGOs include Welthungerhilfe and the Maltese. In 2012, Sparkassenstiftung sent a German employee to the country to intensify a microfinance project that had already started in 2011. Of the political foundations, the Friedrich Ebert Foundation played a pioneering role. It maintains a local office with several local staff and a German representative. The Hanns Seidel Foundation already had Sent a German representative to the country in 2012. The Konrad Adenauer Foundation has had an office in the country since the beginning of 2014, while the Heinrich Böll Foundation managed its programs for Myanmar for a long time from its office in Bangkok, but has also had a representative in the country since 2016. The GIZ has opened an office in Yangon in 2012 and is building a regional office in Taunggyi. The Johanniter have set up their regional office for Southeast Asia in Yangon. At the end of 2013 and beginning of 2014, the World Peace Service and the Wustrow Curve sent the first peace workers to Myanmar, those within the framework of the Federal Civil Peace Service will work in the country.

Visit of the Federal President in 2014

From February 9 to 12, 2014, Federal President Gauck paid an official visit to Myanmar, signaling the new beginning in German-Myanmar relations, which had largely been frozen by the German side after the military coup in 1988. In the capital, Naypyidaw, Gauck met the then Myanmar President Thein Sein, the speaker of parliament, Thura Shwe Mann, and Aung San Suu Kyi.

Gauck opened a branch of the German Chamber of Commerce in Yangon. The office of the East Asian Association was permanently closed at the same time. The President also gave the go-ahead for the new Goethe-Institut in a historic building. Like President Obama before him, he also gave a speech at Yangon University. Here, as elsewhere, he encouraged the audience to continue the reform process that had begun despite all possible difficulties and promised German support.

Aung San Suu Kyi then came to Berlin for a few days at the beginning of April to receive the International Willy Brandt Prize. On this occasion, she also met the Federal President and Chancellor Merkel.

On September 3 and 4, 2014, President Thein Sein visited Germany as part of a European trip. He met with Chancellor Merkel and Federal President Gauck, among others. On September 3, an exhibition was opened in the atrium of the Foreign Office on the occasion of the 60th anniversary of the establishment of diplomatic relations between the Federal Republic and Burma, in which the President did not take part. 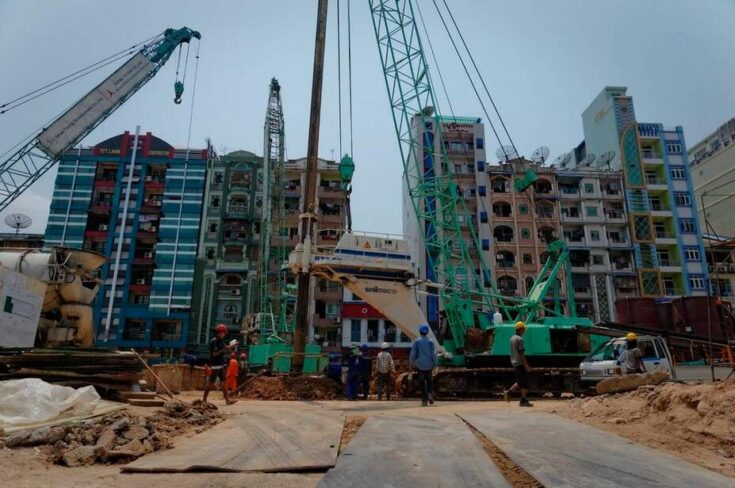