Pluralism and striving for uniformity

The center of Burmese culture in the time of the kings was the court of the respective power center. Literature and theater as well as the visual arts, which mainly serve religious purposes, were protected by the king, but also controlled. With the beginning of the colonial era, a vacuum emerged, which was then filled from the beginning of the 20th century through various forms of engagement with Western culture. The resulting diversity of new cultural forms always faced the need for a cultural unity that could serve as a framework for cultural pluralism. A product of this tension, which can be understood as the cultural side of the country’s political situation since colonial times, was the introduction of a censorship policy with corresponding control authorities, whose preforms were already developed in the “democratic” period up to 1962 and which was not formally abolished until August 2012. With the achievement of independence, this problem was exacerbated by the fact that the cultures of the ethnic minorities were added, which had been kept separate from the Burmese-Buddhist majority culture in the colonial era. One of the main demands of ethnic minority leaders is respect for their cultures, which is difficult to meet given the multitude of ethnicities and their languages. The following descriptions are limited to a few references to the Burmese “high culture”.

Shortly after the turn of the century, the first Burmese novel appeared, an adaptation of the “Count of Monte Christo” by Dumas, which laid the foundation for a literary genre that was previously unknown in the country. In 1911, Western-educated Burmese and foreigners working in the country founded the Burma Research Society, which was dedicated to researching and representing the various aspects of Burmese cultures. It published a journal until it was dissolved in the mid-1970’s as part of the country’s socialist policy of isolation.

Thakin Kodaw Hmine (1876-1964), revered today as a national poet, played a central role as the guardian of the genuine Buddhist-Burmese traditions. As a child he witnessed the deportation of the last Burmese king and in his later writings tried to reconcile the ancient traditions of the country based on Buddhism with the demands of the world of that time. Like many other artists, he was also politically active. Before the anti-colonial war he was the patron of the “We-Burma” movement and after the war he traveled to peace conferences, mainly in the Eastern Bloc. On the occasion of an eye operation carried out in East Berlin, he was awarded a medal from the GDR. In Moscow he had already received the Order of Lenin.

In addition to a literature that experimented with new forms, in the course of the nationalist struggle for independence, a literature was created in the service of the struggle for freedom and, after World War II, the promotion of the building of a new nation under different political omens. The “high culture” of the ethnic Burmese is still in the foreground today, while the many ethnic cultures officially lead a rather folkloristic shadowy existence. An exception are the efforts of the writer and publisher Ludu (“People”) U Hla (1910-1982) and his wife Daw Amah (1914-2008) to compile a comprehensive collection of folk tales from a variety of ethnicities. Due to the fact that the couple was always in opposition to the respective government, these efforts could not be publicly effective.

According to mathgeneral, Burmese writers are hardly known abroad. This has to do with the country’s longstanding isolation and the resulting lack of translators. In addition, demanding Burmese texts are often difficult to translate into another language. There are only a modest number of translations of Burmese short stories and some novels. The works of the national poet Thakin Kodaw Hmine have not yet been translated due to his highly extravagant style.

The diverse literary scene, which flourished after independence was achieved, was severely restricted in the socialist period after 1962 because socially critical works could not be published and writers were called on to help build Burmese socialism. This encouraged the tendency to produce prose on generally human subjects like love and passion, as well as poetry writing, which is practiced by many Burmese. In 2013, a PEN center was also opened in Myanmar. The center has two priorities: the continuation of the struggle for freedom of expression and the revitalization of Myanmar literature. 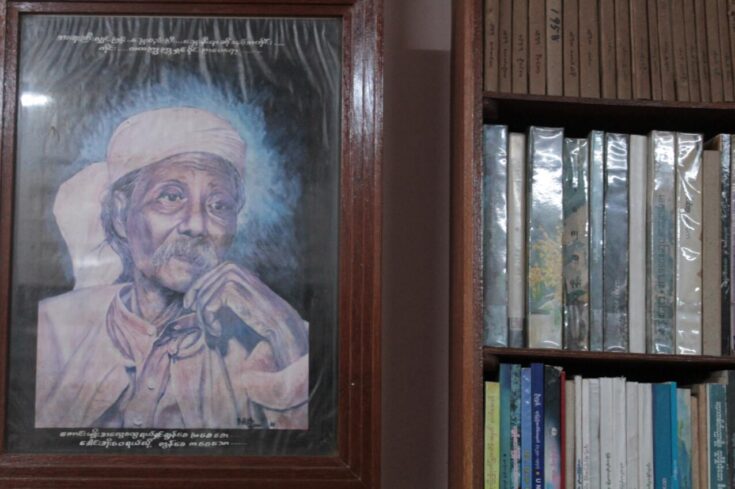 Burma has always had a lively art scene with numerous studios and art galleries. Until 1988, painting was mostly done in the traditional style. The main motifs were pagodas, landscapes and depictions of people that were produced for the local market and the few foreign tourists. After the opening in 1988, the tendency towards experimental art forms that had already been attempted increased, but the preference remained primarily in the field of painting. There are an abundance of art galleries. The prominent Pansodan Gallery in Yangon provides regular and competent information about cultural events and artistic activities in the country.

A look at the buildings of the new capital Naypyidaw as well as many representative buildings in Yangon (town hall, train station) shows that the models of the architectural style from the time of the Burmese kings are still formative. A “modern” architecture has not yet been able to develop in Myanmar. The Yangon Heritage Trust was founded in 2012 and is a non-governmental organization that works to preserve the historic architecture of Yangon.

The country has a great tradition of puppet theater and drama. Both have lost their importance with the advance of radio and television. There are only a handful of good puppeteers left in Myanmar and hardly any places where regular performances take place. The traditional theater groups have almost completely ceased to exist. At religious celebrations, however, there are a number of local artists who keep the old traditions alive. The art of classical dance is cultivated more for tourists.

Primary Industries Agriculture While agriculture used to employ most of the population, fewer people in Asia now work in agriculture. The proportion of cultivable land varies tremendously between the different countries in Asia – from around 60 per cent of the land area in Bangladesh to less than 0.5 per cent in Mongolia. Rice is […]

ECONOMY Business etiquette It is advisable to make an appointment in advance. Value is placed on punctuality. Business meetings are not quite as formal as in Europe. Verbal business agreements apply. Business cards should be in English on one side and in Arabic on the other. English is widely spoken in business circles, but interpreters […]