Basics of the history of Burma up to the colonial era

The official view of the history of Myanmar by the military, which initiated the constitution of 2008, can be read from the picture above, which shows a military parade in a square in the capital Naypyidaw.

The founders of the three great Burmese dynasties are shown larger than life in the background of the parade ground. Anawrahta for the Empire of Bagan (1044-1287), Bayinnaung for the Taungoo dynasties (16th-18th centuries) and Alaungphaya for the Konbaung dynasty (1752-1885).

All three kings come from Upper or Central Burma, all of them belonged to the Bamar ethnic group who, through conquests, came under their suzerainty as well as some other kingdoms in the neighborhood in today’s India, China, Thailand and Laos – but never completely under theirs Control – brought.

In a history based on these great empires, the many other ethnic groups in the country appear only marginally as allies or opponents of the Burmese, but not as independent peoples. In addition, this Bamar-centered image of history suggests a historical continuity that did not exist in this way.

According to businesscarriers, the history that took place on the soil of what is now Myanmar can be described to the present day as a series of cycles of the rise and fall of individual rulers and the ideologies on which they based their government.

The ideology of rule of the three great kingdoms, like that of most of their rivals in the Hindu-Buddhist world, was that of dhammaraja, the righteous ruler, whose rule is based on Buddhist truth, the dhamma. At the same time, the respective ruler was a cakravartin (rotator of the worldly wheel parallel to the Buddha as the mover of the spiritual wheel), i.e. a world ruler whose palace in the respective capital reflected the Buddhist cosmos on a small scale. The qualification of an heir to the throne was determined by the good kamma assigned to him (Sanskrit: Karma), i.e. the sum of his meritorious deeds accumulated in the past and present life. One consequence of this ideology was a high degree of uncertainty in the succession of a deceased or unhappy ruler. There were no fixed rules for this, and there was always the possibility that pretenders to the throne could claim that they were entitled to government because of their good kamma.

The three great founders of the Burmese royal dynasties, it is reported, all came from rather simple backgrounds. The successors of these “strong kings” were then often not able to meet the high standards of the dynasty’s founders, which led to constant crises in the empire and ultimately to its end.

Against this background, the history of “modern” Burma, which became independent in 1948 after the British colonial era, can also be described as a series of cycles in which individuals attempted to politically realize the legacy of the national hero Aung San, who was murdered in 1947. The last of these attempts began in April 2016 after the party of Aung San Suu Kyi, the daughter of Aung San, won an overwhelming election.

This term, which means “circle”, can be used to describe the pre-modern political systems of Southeast Asia that are still having an impact. There are individual centers of power here, the influence of which continues to weaken towards the outside world. Each of these centers tries to bring others under its suzerainty. That is why we also speak of “galactic polity” (Tambiah) or “solar polity” (Liebermann). Since the respective centers of power claimed to exercise sole supremacy, there were wars in the event of an overlap of the spheres of influence, as often took place between centers of power on the soil of the present-day states of Myanmar and Thailand. In 1767, for example, the Siamese center of Ayutthaya was occupied by the troops of the Burmese King Hsinbyushin,Ava (Innwa) resided, destroyed. As a result, the new center in Bangkok was built in Siam and the Chakri dynasty was founded.

was the founder of the Kingdom of Bagan (Upper Burma) and the first Burmese dynasty, which lasted from the beginning of the king’s reign in 1044 until the conquest of Bagan by the troops of Kublai Khan (1287). Thereafter, for nearly 300 years in what is now Myanmar, there was no central authority that controlled the whole country. Anawrahta’s empire began in the arid Upper Burma and owed its economic wealth to a further development of the irrigation systems that had already been built and the workforce brought in by military campaigns. The king established Theravada Buddhismas the dominant religion in the country and at the same time as the basis of legitimation for political rule. According to the Burmese chronicles, he came into possession of the Buddhist canon (Tipitaka – “three basket”) through the conquest of the Mon capital, Thaton, in Unterbirma. The King Manuha and numerous residents of the city were brought to Bagan, which led to a great influence of the Mon culture on the Kingdom of Bagan.

Bayinnaung was the third king of the second Burmese dynasty, named the Taungoo dynasty after the seat of government in Central Burma. The extremely bellicose king forced Ayutthaya (Siam) and numerous other neighboring centers of power to recognize his sovereignty, but not Arakan (Rakhine) in what is now western Myanmar. During his time, after the conquest of Malacca by the Portuguese (1513), the European influence began to make itself felt in Burma as well. This happened once when the commercial interests of European merchants came into play. On the other hand, the European war industry was imported. One consequence was that mercenaries from Europe fought on both sides of the Asian warring parties.

The founder of the third Burmese dynasty, which came to an end in 1885, brought it in a very short time (from 1752) from village chief in Shwebo (Upper Burma) to lord of a large empire in which upper and lower companies were united due to his charisma and his art of war. He founded the city of Yangon near the town of Dagon, where the Schwedagon Pagoda, which was already famous at the time, stood. The name “Yangon” given by him means “end of the dispute”. The conquest of a British settlement on Cape Negrais in the south-west of the country and the death of numerous British (1859) put a lasting strain on the Burmese-English relations. The king died in 1860 on a campaign to Siam. His son Hsinbyushin conquered Ayutthaya in 1767 and put an end to the local dynasty, which was replaced by the Bangkok dynasty from 1783.

This letter is in the Leibnitz Library in Hanover. It was written in 1756 by the Burmese King Alaungphaya to his British colleague and contained the offer of political and economic cooperation. The recipient, who came from the House of Hanover, sent the letter, which had been sent in an ivory sleeve, to the royal library in Hanover, which was under his control, where it was kept for 250 years. The text could not be deciphered. This was then achieved by the Luxembourg scientist Jacques Leider, who translated and commented on the letter. On January 18, 2011, the gold piece was presented to the public in the presence of the Prime Minister of Lower Saxony and the Ambassador of Myanmar in Germany. 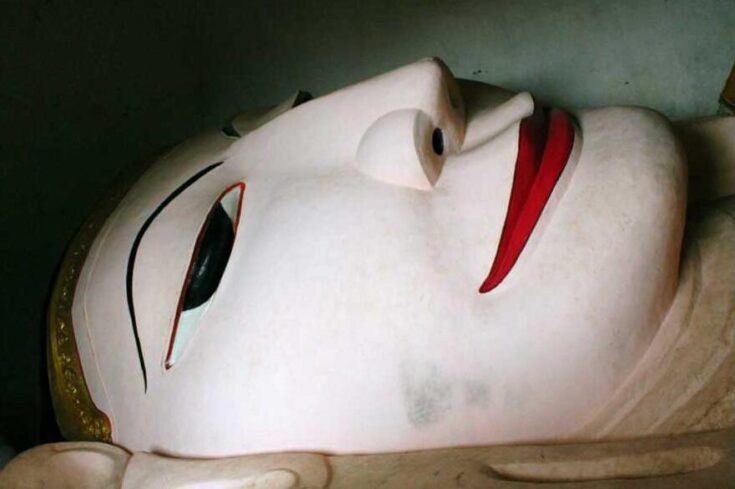