The second elections under the 2008 constitution were set by the Electoral Commission in July 2015 for Sunday, November 8th. Shortly afterwards, Aung San Suu Kyi announced that the NLD would also take part in the elections. The elections were discussed in advance mainly from the point of view of whether the chairwoman Aung San Suu Kyi could become president of the country after an election victory of the NLD. A constitutional amendment would have been necessary for this, but this could no longer come into force until a new president was elected by parliament. The temporarily considered possibility of a national referendum was dropped again due to lack of time.

There was also no reform of the electoral law. Some parties had called for a change in the current majority voting system based on the British model (first-past-the-post system) in favor of proportional representation based on the German model.

Another controversy was sparked by the comments made by monks on the elections, who have long carried out massive anti-Muslim propaganda. The MaBaTha monk group announced that they would advise against choosing parties that would not support Buddhism in their favor. In connection with the clashes between Buddhists and Muslims, it was criticized that the majority of the Muslims known as Rohingyas in Rakhine State were unable to participate in the elections. Not a single Muslim candidate was nominated by the NLD in the whole country either.

The election campaign began on September 8th. 92 parties had successfully registered, of which at least 60 represented the interests of individual ethnic groups. Aung San Suu Kyi events were the best attended nationwide.

Contrary to some expectations, election day was calm. The rush in the polling stations was great from early morning. The numerous international election observers noted that the election went smoothly. The first prognoses already indicated a landslide victory for the Aung San Suu Kyis party. 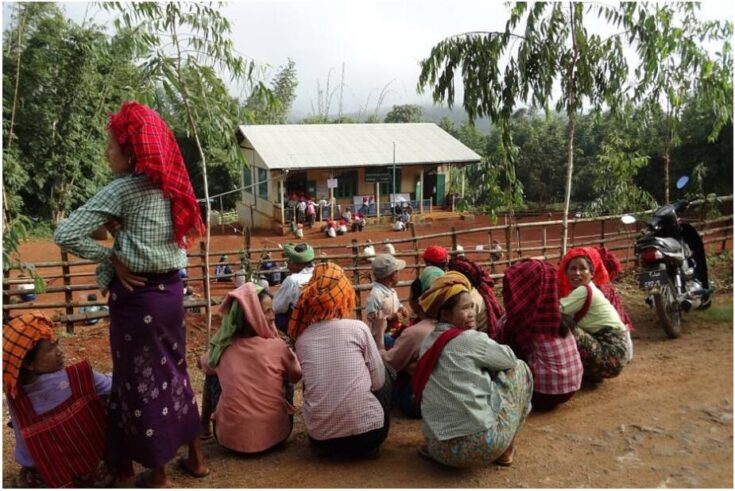 Similar to the 1990 elections, the NLD achieved an overwhelming victory. She won 255 of the 330 seats available for election in the “People’s Chamber” (Pyitthus Hluttaw), 135 of 168 seats in the Chamber of Nationalities (Amyotha Hluttaw) and 496 of 644 seats in the 14 parliaments of the 7 regions and states (the former are predominantly by the majority of ethnic Burmese, the latter inhabited by other ethnic nationalities). The numbers for the previous ruling party USDP are 30, 11 and 76. Due to military conflicts in some regions of the country, 7 seats in the “People’s Chamber” and 14 seats in the regional parliaments were not filled. Another 20 out of the 93 parties that took part as well as one independent won at least one seat in one of the 16 parliaments.

The NLD also won the overwhelming majority of the “Ethnic Affairs Ministers” who are supposed to represent the interests of ethnic minorities in the individual regions and states in which another ethnic group forms the majority. However, like the newly created Ministry of Ethnic Affairs after the election, these have not yet produced generally recognized positive results. The largely unsolved multiethnic problem can be seen, among other things, in the fact that the results of the 2014 census on the ethnic composition of the country have still not been published.

According to computergees, the next elections in Myanmar are due at the end of 2020. So far 98 parties have already registered, making Myanmar the largest number of political parties within ASEAN. In the period leading up to the elections, there could be further tension in the country; however, of course, the elections also offer an opportunity for long-term peace and stability.

The election of the president

A central task of the two Union Parliaments is the election of the President and his two representatives. For this purpose, one candidate is nominated by each of the two chambers and by the members of the military. In a vote by both houses, the president who gets the most votes becomes president. The other two candidates become vice-presidents. Since Aung San Suu Kyi cannot become president, the question was which candidates will be proposed by her party. Even before the election, she said that if her party won the election, she would be ” above the president “.

On March 10, 2016, the two houses of the Union Parliament in Naypyidaw proposed their candidates for the presidency. The Pyitthu Hluttaw (People’s Chamber) proposed U Htin Kyaw, the Amyotha Hluttaw (Nationality Chamber) proposed Chin Henry Van Htio, both members of the NLD. A day later, the MPs sent by the military nominated ex-General Myint Swe, the still incumbent Chief Minister of the Yangon region, as their candidate.

Htin Kyaw, born in 1946, is not a member of parliament, but an old acquaintance and later confidante of Aung San Suu Kyi. He went to the same elementary school as her and studied in London in the 1970’s, which is where she was then. He studied economics and computer science, worked for the government until 1992 and is now president of the Khin Kyi Foundation, which was established by the party leader and named after her mother. The father of the President-elect was Min Thu Wun, a famous writer who was one of the founders of a new literary movement in the 1930’s and who converted the Burmese language into Braille after the war. In 1990, as a candidate for the NLD, his father won a seat in the parliament that never met. He resigned the mandate in 1998 for reasons of age and illness. Htin Kyaw’s wife has been a member of the People’s Chamber since 2012. Her father is the co-founder and long-time press officer of the NLD, U Lwin.

Little is known about 58-year-old Henry Van Htio. He was elected to the Chamber of Nationalities in the last election and was a former colonel in the Burmese army.

Myint Swe is considered a hardliner. As Chief Minister of Yangon, he also has excellent relations with the business people in the country’s commercial center.

As expected, on March 15, 2016, the two houses of the Union Parliament elected Htin Kyaw as the new president. He received 360 of the total of 652 votes cast (some constituencies had not been elected, so that not all 664 parliamentary seats were occupied). The military candidate, Myning Swe, received 213 votes, significantly more than the number of soldiers appointed by the commander-in-chief in parliaments (166). Henry Van Hti Yu received 79 votes.

On March 21, 2018, the president resigned, presumably for health reasons. At the same time, the Speaker of the House of Commons, Win Myint, resigned from office. He was elected to succeed Htin Kyaw on March 29th. The new president is seen as assertive against the background of his work as President of Parliament.

On March 30, 2016, the President and the two Vice-Presidents were sworn in in Naypyidaw and shortly afterwards the new cabinet. It was downsized in line with an NLD election promise and includes 25 ministries. The composition shows that it is intended to serve national unity: The NLD took over 10 ministries, 10 were filled with independent experts, one minister each belong to the reigning ruling party USDP and a party from the Mon state. Aung San Suu Kyi initially took on four offices – in addition to the office of minister in the presidential office, the offices for foreign affairs, education and energy. Two of these ministries (Education and Energy) were then filled on April 6th. For this, the new office of State Counselor was established on the same day created for them, endowed with powers that come close to the position of a prime minister not provided for in the constitution. This took account of their particular importance. The MPs sent by the military did not approve of the creation of this post. They argued that this would violate the principle of separation of powers.