The period of independence until 1988

The cyclical movement typical of the time of the dynasties can also be observed in independent Burma / Myanmar. Nu, Aung San’s successor and close companion, failed with his program of Buddhist socialism and was overthrown by another of Aung San’s campaigners, General Ne Win. Its attempt to realize a “Burmese road to socialism” ended after initial success in an economic disaster. Then the military took over again, but had to deal with the daughter of the independence hero, Aung San Suu Kyi, who was and is viewed by the people as the legitimate heir and successor of their father and who advocates the establishment of a “true democracy” in the country. Opposite you is the leadership of the military (Burmese: Tatmadaw), which has a different version of democracy on its flags. The two “heirs” of Aung San shared power after the 2015 elections, which ended with an overwhelming victory for Aung San Suu Kyis.

U Nu was – with a few interruptions – Prime Minister Burma between the country’s independence in January 1948 and the military coup of March 2, 1962. Nu originally wanted to be a writer, but was at the same time an ardent nationalist and – unlike Aung San – a traditionally pious Buddhist. Like Aung San, he got into politics through the 1936 student strike. In the government at the time of the Japanese occupation he was first foreign minister and then information minister. After the assassination of Aung San he became head of government. He failed in attempting the split the political rallying movement, which had fought for independence under Aung San’s leadership, and therefore resigned in 1958. He won the 1960 elections, among other things, because of the promise to make Buddhism the state religion. This rekindled the civil war (the Christian Kachin then began their rebellion). The measure was one of the reasons for the Ne Win coup in March 1962. Nu was imprisoned for some time, was released, went abroad and tried to overthrow the Ne Win regime with the help of an army built in Thailand. After that failed, he returned to Burma in 1980 after an amnesty and continued to play a (secondary) role in the unrest of 1988.

From the beginning of his military career as a member of the core of the Burmese national army trained by the Japanese in World War II until his resignation in July 1988, U Ne Win played a decisive role in the history of Burma in various functions, both militarily and politically. With the help of the military he led, the Nu government survived the civil war after independence began. In 1958, he took over the government of U Nu for 18 months, organized elections and then launched a coup in 1962 after the civilian government was in his view unable to solve the country’s problems. He then largely organized the “Burmese Path to Socialism”, which was founded on its own philosophy and which resulted in a new constitution in 1974 led. Since then he has been an official civilian and chairman of the Burma Socialist Program Party (BSPP). The project failed due to the inability to get the country’s economy going – despite Burma’s massive support from Japan and the Federal Republic of Germany. From 1962 to 1988 Ne Win spent a few weeks in the Rheingau every year and conferred there with members of the German government, political parties and business representatives. He died in 2002 after a show trial of a son-in-law and three grandchildren over an attempted coup.

According to commit4fitness, Dr. Maung Maung was the last chairman of the Burma Socialist Program Party (BSPP) and President of Burma for a month prior to the September 18, 1988 military coup. He was a lawyer, journalist, and something of a historiographer of the Ne-Win era. His books written in English and his biography, published in 2009, give a good insight into the “inner view” of Burmese socialism. In his short time at the head of the state, he tried to initiate a constitutionally compliant transition from the one-party system to the multi-party system. That failed, among other things, because of the demands of the demonstrators and their leaders (including Suu Kyi) for the immediate establishment of a transitional government.

The senior general joined the army in 1953 and then worked for a while in the army’s psywar department, where, among other things, the political role of the army in relation to civilian politicians was discussed. He quickly made a career and became Deputy Secretary of Defense in 1985. During the military coup in 1988 he was number 2 behind General Saw Maung, who headed the State Council for Peace and Development (SLORC) until 1992, but was apparently overwhelmed with the political tasks of a head of state. Than Shwe succeeded him and was then the central figure in Myanmar politics. He was considered a very skilled tactician. He managed to maintain the unity of the armed forces and rivals like Turn off Khin Nyunt. He is said to be megalomaniac (allegedly he sees himself as the incarnation of a former Burmese king) and corrupt behavior. With the processing of the roadmap from 2003 and the establishment of a nominally civilian government after the elections of 2010, he pursued an elegant exit strategy. Years after his resignation there is still speculation about his continued influence on the country’s politics. 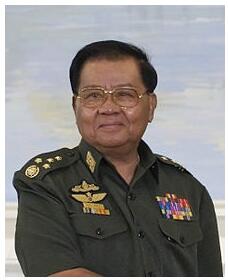