The first people came to America from Siberia maybe 30-40,000 years ago. Maybe as early as 12,000 BC the whole continent was populated.

North America’s oldest history is particularly related to the indigenous population that existed on the continent prior to European colonization, as well as to Inuit and Aleutian.

Recent archaeological research seems to confirm the tradition of Norse trips to North America. These journeys, however, had no lasting significance. It was not until the 16th century that North America was colonized and conquered by Europeans.

The Spanish took possession of Florida in 1516, and in the decades that followed, Spanish explorers as well as Lower California as well as inland up to the present Missouri and Ohio.

In the middle of the 16th century, an extensive rivalry for the dominion of North America began. France founded Québec in 1608, thereby gaining Canada as the cornerstone of its colonial system on the continent. From Canada, French explorers sailed south through the Great Lakes along the major rivers of the present United States to the Gulf of Mexico. Cavelier de La Salle took possession of this area in 1682 for the King of France and named it Louisiana.

While France (and Spain) stood strong in later Canada, in the interior of the present United States and in the southern and western parts of the continent, British and other northern European nations sought to colonize the east coast.

In southeastern Virginia was founded by British in 1607, and from 1620 English immigrants also built colonies in northeastern New England. Both the Dutch (estuary of the Hudson River) and Swedish (the Delaware River area, around present-day Philadelphia) colonization attempts lasted only a few decades in the mid-1600s.

The English gradually took over the middle part of the east coast and extended their dominions in the Caribbean and the Atlantic. About. In 1700, the English colonies were the most populous, and England stood strong in North America. This was reinforced by all the wars between the European great powers of the 18th century, which were also fought in North America. At the Paris peace in 1763, France renounced Canada and the part of Louisiana that lay east of the Mississippi to the United Kingdom, thus ceasing to be colonial power in North America. Spain relinquished Florida to the United Kingdom.

The expansion of settler territories in the 17th and 18th centuries eventually led to significant restrictions on the American indigenous peoples’ land and rights. The Indians formed a number of groups and no unified nation. During the wars of the European superpowers in North America, the whites could usually count on Native American allies; the old contradictions between the tribes gained with this new content.

The fact that the war was changing between the great powers only worsened the situation of the Indians. They were going to support the losing French in the fight against the British, then the British against the victorious Americans in what became the United States; some tribes in the Indian Territory (now Oklahoma) supported the Southern States (the Confederates) in the Civil War 1861-65.

During the American War of Independence in 1776–1783, the British retained Canada, and Florida returned to the Spaniards (until 1819). But the United States won the peace of 1783 Louisiana east of Mississippi. In addition, during the Louisiana acquisition of 1803, the United States acquired land west of the Mississippi from France (which in 1800 had purchased them from Spain). Texas was an independent republic in 1835-1845 and then joined the United States. In the Mexican-American War that followed, Mexico had to relinquish the territories west to the Pacific.

The British colonies of North America in 1867 joined a self-governing dominion, Canada. In 1869, Canada purchased the Northwest Territories from the Hudson’s Bay Company. When British Columbia (1871) and Prince Edward Island (1873) entered the dominion of Canada, this included all of British North America with the exception of Newfoundland (occupied in 1949).

The United States had, during a brief war with the United Kingdom in 1812-1815, tried to conquer Canada, but without success. Then border disputes were resolved through negotiations; the most important took place in the 1840s and resulted in the boundary being set at 49th latitude. Thus, among other things, the Oregon area t the United States. The Americans bought Alaska from Russia in 1867. Thus, the current borders of North America were set. 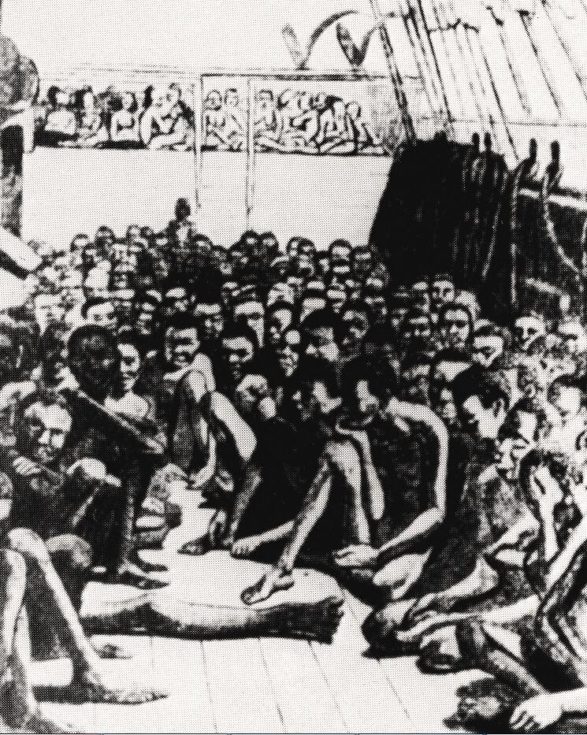 North America. – The Africans made up a large group of involuntary immigrants. They were forced to move to America in overcrowded slave ships from the 16th to the 19th centuries. The introduction of slaves to the West Indies began in earnest in the late 17th century, to the southern states of the United States mainly in the 18th century and in the first half of the 19th century.

The historical development in North America is also explained in more detail for the individual countries on COUNTRYAAH, including United States, Canada and Mexico.

Kristoffer Columbus is often regarded as the first European to come to North America, but it hardly brings any accuracy. According to an Irish medieval script, Navigatio Sancti Brendani Abbatis (Abbey of St. Brendan’s voyage), it is not unlikely that Abbot Brendan came to the North American East Coast as early as the 500s. He and 17 other Irish monks had sailed out of Ireland in a leather boat to find the promised land west of the sea, where God’s word, according to legend, was to reign unrestricted.

According to Norse tradition, Leiv Eiriksson was the first European to come to North America, ca. year 1000, and shortly after visited by other Greenlanders and Icelanders, including the Icelander Torfinn Karlsevne, who at the head of a flock of bureians for approx. 1020 tried to settle in Vinland, but had to give up after three years.

Modern researchers find it proven that travel to North America really took place in the Viking Age, and findings made by Helge and Anne Stine Ingstad suggest that Vinland was on Newfoundland ( L’Anse aux Meadows ), or else land was also guessed at the Gulf of St. Lawrence and New England. From 1347 there is information about a ship that arrived in Iceland after being in North America, and in 1472 or 1473, the Danish king Christian 1 sent, at the request of the King of Portugal, an expedition to the waters west of Iceland and Greenland., and this expedition is supposed to have reached the North American mainland. Also on the trip was the Portuguese Jão Vaz Corte-Real, whose son Gaspard in 1500-1501 explored the north coast of North America in an attempt to find a northwestern road to India. In 1497, Venetian Giovanni Caboto (John Cabot), in English service, came to Labrador – five years before Columbus set foot on the American mainland.

It is claimed that Chinese Zheng He came to America as early as the 1420s, but this information is fraught with great uncertainty.

However, it is Kristoffer Columbus who is regarded as the great discoverer of America and who initiated a large-scale European exploration of the area. In the decades that followed Columbus’s arrival in the Bahamas, Cuba and Haiti in 1492, the Spaniards explored most of the islands and coasts of the Caribbean and the strip of land along the Gulf of Mexico.

Ponce de León discovered Florida in 1513, Hernando de Córdova Yucatán in 1517, Hernán Cortés conquered Mexico in 1519-1521, Pedro de Alvarado Guatemala and El Salvador soon after; California was discovered in 1533 and Vásquez de Coronado led an expedition north to New Mexico and Arizona in 1540-1542. With his main force he came to the Grand Canyon, Rio Grande and all the way to Kansas. About the same time, Hernando de Soto crossed Florida,Georgia and Tennessee to Mississippi.

The Spaniards claimed the newly discovered areas, but the French and the English gradually became unwilling to respect demands that did not rely on military force. The first French and English attempts to destroy colonies (Jacques Cartier in 1534–1536 and 1541, and Walter Raleigh in 1584–86 in North Carolina) failed, but in 1606–1607 the English settled in Virginia. From here they gradually spread throughout the East Coast, displacing the Dutch from the Hudson River in 1664, where they had lived since 1614, and the Swedes, who had settled at Delaware.

At sea, the English pushed north. Martin Frobisher eased in 1576 and in the following years in vain for a northwest passage to Asia, but he discovered Baffin Island. John Davis sailed through the Davis Strait and far into the Gulf of Baffin in 1585–1587, and in 1610 Henry Hudson penetrated the Hudson Strait to Hudson Bay.

In 1634, fur hunters and other travelers had rushed to Illinois, Father Jacques Marquette and fur trader Louis Jolliet (formerly Jesuit ) came to Upper Mississippi in 1673, at the intersection of it and the Arkansas River. Cavelier de La Salle opened the connection between the Gulf of St. Lawrence and the Gulf of Mexico when, in 1682, he came to the mouth of the Mississippi and took possession of the land by the French king and named it Louisiana, after Louis 14.

By the Paris peace of 1763, however, France had to relinquish all its possessions in North America to Britain. French fur hunters, scouts and pathfinders also needed to move west and northwest. In 1734 Pierre Gaultier de Varennes discovered Lake Winnipeg, nine years later his sons penetrated Upper Missouri and followed it to the Rocky Mountains, and in 1748 they discovered Saskatchewan and Lake Manitoba.

The Appalachians put a long fence on the British advance to the west; it was not until 1716 that these mountains were exceeded, but still 100 years later little knowledge of western North America was reached, and on foot no one had yet reached the Pacific coast in the north. The coast was explored by seafarers. Spanish seafarers from Mexico had been up the Alaskan coast, Francis Drake had followed the California coast, but only when the Russians had subdued Siberia and crossed the Bering Strait and occupied Alaska (which remained in Russian ownership until 1867) were new major advances made.

The Danish Vitus Bering, in Russian service, discovered St. Lawrence Island in 1728, James Cook explored North America’s west coast from San Francisco to the Bering Strait. In his wake, the Frenchman Jean François Lapérouse and the British sailed George Vancouver. The Arctic lands were explored by British fur hunters and traders. In 1769–1772, Samuel Hearne traveled from Hudson Bay across the Barren Grounds to the outlet of the Coppermine River by the Arctic Ocean, while Alexander Mackenzie reached the Arctic Ocean at the mouth of the Mackenzie River in 1789. In 1792–1793 he crossed the Peace River, across Rocky Mountains and arrived in the Pacific North of Vancouver as the first European to cross the continent.

With the independence of the United States in 1776, immigration from Europe increased and thus pushed westward. Important to American expansion was John Charles Frémont’s research journey in the 1840s. He surveyed the areas west of the Mississippi and investigated the route of arrival west to the mouth of Columbia.

The great European emigration to North America reached its peak in the 19th century and the beginning of the 20th century. The picture shows a busy day at the port of New York, 1869. Close by was Castle Gardens, the reception station for immigrants to the state of New York.

Prior to 1800, the geography of North America south of the Arctic was known in rough terms, and exploration in the 1800s and 1900s has therefore concentrated on polar regions. Government institutions in the United States and Canada have participated in the work with great energy, which has led to North America being one of the best explored continents.