In 1956, Urho Kekkonen was elected President of the Republic with only two electoral votes over Fagerholm. Fagerholm formed a new government, but this cracked down in 1957. In 1958, Fagerholm succeeded in forming a parliamentary government based on all the non-socialist parties and social democrats and with a majority in the newly elected parliament. The formation of government aroused deep mistrust in the Soviet Union because of the new conservative and some right-wing socialist ministers. The result was diplomatic and economic reprisals. In this, the ministry cracked down, and in January 1959 Vieno Johannes Sukselainen formed a pure Agrarian Party government of people who had confidence in Moscow. 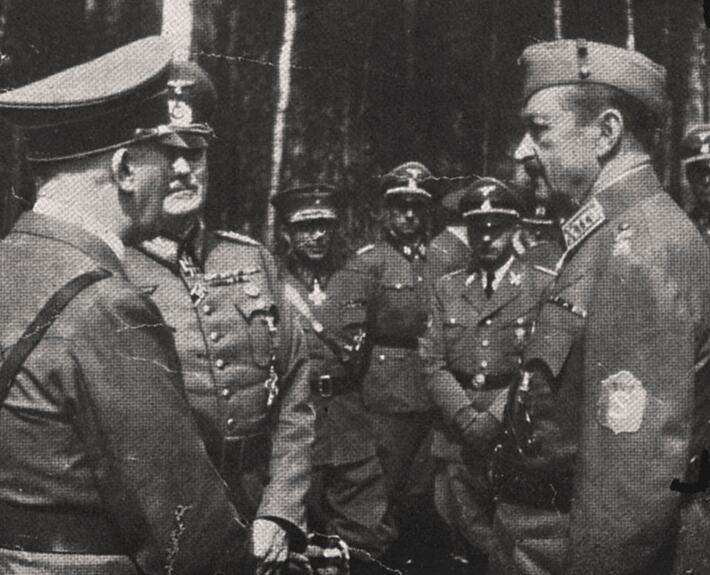 From the autumn of 1940, military cooperation between Finland and Germany was established, and when Germany attacked the Soviet Union in June 1941, the Finns joined in the so-called “war of war” to recapture their lost territories. The picture shows Hitler and Mannerheim at the front in Finland.

The normal relationship with the Soviet Union was restored, but in the autumn of 1961 a serious crisis arose between the two countries. In Moscow, it was believed that the forces behind the conservative presidential candidate Olavi Honka wanted to break the Paasikivi line. In a note that created dismay in Finland and concern in Scandinavia, the Soviet government demanded military discussions in accordance with the 1948 Aid Pact and cited the consequences of Denmark and Norway’s NATO membership.

To give concrete evidence of the Finns’ support for the Paasikivi line, Kekkonen dissolved the Riksdag and wrote new elections. When this did not seem sufficiently reassuring in Moscow, Kekkonen traveled to the Soviet Union and met Prime Minister Nikita Khrushchev, who openly expressed his distrust of the Honka Group and his confidence in Kekkonen, but renounced the demand for military negotiations. Honka was thus torpedoed as a presidential candidate and resigned. Kekkonen received all non-socialist votes in the electoral assembly. The Soviet Union settled down with the outcome of the election, and the crisis was over.

Rapid inflation from the mid-1960s, which led to, among other things, unemployment, necessitated drastic countermeasures. In 1967, the Finnish mark was devalued by more than 30 per cent. In 1968, Kekkonen was re-elected by a two-thirds majority, the largest majority in a normal presidential election in Finland. Only the Collective Party, the Conservative wing of the Swedish People’s Party and a shelling of the Center Party went against him. An agreement on measures to combat inflation between the labor market and business organizations gave the new government under Social Democrat Mauno Koivisto a hopeful start.

Foreign policy, Kekkonen energetically followed Paasikivi’s policy with the all-too-obvious aim of strengthening good relations with the Soviet Union. For this reason, the name Paasikivi line was gradually changed to the Paasikivi-Kekkonen line. Nevertheless, there were problems in the relationship between the two countries. A profound difficulty arose in November 1959, when the Western European Free Trade Association EFTA was formed. Only in March 1961 did they succeed in establishing both a satisfactory agreement with EFTA and counterbalancing a trade agreement with the Soviet Union. In January 1969 Finland was also admitted to the OECD.

However, none of the problems mentioned here cast a lasting shadow on the relations between Finland and the Soviet Union, as demonstrated by the numerous visits by the Soviet leaders to Finland and the many revisits of Kekkonen and other prominent Finns in Moscow. Finland also actively participated in Nordic co-operation in a number of areas, especially within the framework of the Nordic Council. An initiative towards the other Nordic countries in 1963, supplemented in 1965 (the Kekkonen Plan), to get the Nordic position as a nuclear-free area of ​​the treaty, did not progress.

Political development in the 1970s

Finland’s political development throughout the 1970s was dominated by economic problems with inflation, large current account deficits and threatening unemployment. Difficulties in restructuring the economy increased as the complex parliamentary situation became even more complicated, including through the formation of new parties. Veikko Vennamo’s protest party, the Rural Party, was seated in the 1970 election in a tilting position between Parliament’s socialist and bourgeois wing. Personal intervention was needed from President Kekkonen before Ahti Karjalainen succeededto establish a majority government. Among the problems that led to conflicts in the first part of the 1970s was a controversy over agricultural income in the fall of 1971, and disagreement between the Social Democrats and the Center Party on the district development in 1975.

The government crises were frequent in Finland in 1970s. Disagreement over how to solve the financial problems led to government collapse and constant Kekkonen intervention. At the same time, none of the economic problems were solved: rising unemployment, rapidly rising inflation and large trade deficits. The seriousness of the situation was highlighted by an imminent danger of a major strike during the spring 1977 tariff settlement and a six percent devaluation of the Finnish land in April, a measure that was followed by a further three percent write-down in September.

Throughout the 1970s, Finland’s foreign policy consistently followed a line of neutrality on the basis of the assistance pact with the Soviet Union that Paasikivi initiated and Kekkonen continued. It was confirmed by the large conference on security and cooperation in Europe (KSSE) held in Helsinki in the summer of 1975. The only foreign policy issue of importance was Finland’s affiliation with the EC. After protracted negotiations in Brussels and Moscow and tough riots in the Reichstag, the Finnish government in 1973 was able to sign a trade agreement with the EC. At that time, a similar agreement was reached with Comecon.

Also in the 1970s, Urho Kekkonen dominated the political scene in Finland. After being elected for the third time in 1968 for the normal six-year term in 1968, the Riksdag passed a special law in 1973 that extended his mandate to 1978. at the presidential election, and after the 1978 election he retained the presidential post. However, he retired in 1981 due to ill health and died in 1986.