Finland did not participate directly in World War I, but still had to bear some of the burden of the war. Russian naval units and large troop forces were proclaimed to Finnish territory and siege state in the country. The March Revolution in Petrograd in 1917 (the Russian Revolution) immediately propagated to Finland. The socialist majority of the day passed a law that gave it much of the authority of the tsar. The law was not approved by the Russian Kerensky regime, which disbanded the Land Day with the support of the Finnish bourgeois parties and wrote new elections. This time, the bourgeois parties conquered the majority and formed government under the leadership of Pehr Evind Svinhufvud. The bitterness among the socialists was so great that Finnish society was divided into two irreconcilable camps. 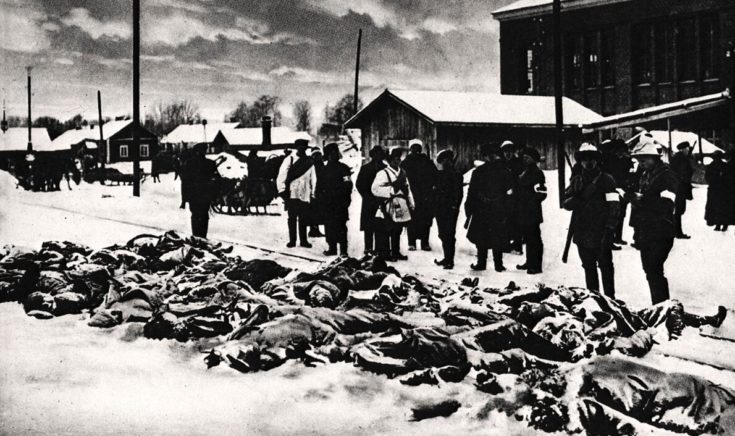 From the bloody civil war of 1918. The picture shows part of the victors of the war, the “whites”, by the bodies of some of their beaten opponents, the “reds”.

The revolution in Russia in March 1917 weakened the policy of Russification in Finland and the question of full independence for the country came up openly in the political debate. However, the Kerensky government in Russia was very accommodating to Finnish independence demands. At the same time, the social tensions in Finland, not least due to lack of land reform, were strong and rising. The March Revolution created a power political void, supply problems and increased social tensions.

The next Russian revolution in November (the “October Revolution”) helped to gradually radicalize the socialists in Finland in the Bolshevik direction and organize the so-called Red Guard, which were armed groups. The bourgeois, for their part, established so-called “protection corps” (protection corps). The reds in Finland are embarking on a revolution in the country with the help of the Russian soldiers who were still stationed there. Towards the end of 1917, a “red terror” began as a result of fierce class contradictions and in response to the civilian armament in the form of “protection guards”. The bourgeoisie or the whites, made every effort to achieve full Finnish independence.

On December 6, 1917, a bourgeois-dominated Land Day declared Finland’s full independence. The Bolshevik government in Russia recognized Finnish independence on December 31 of the same year. The bourgeois “security guards” were now elevated to the Finnish army under the leadership of Carl Gustaf Mannerheim, who had been a Russian officer. The government of Helsinki now saw it as its foremost task to get the Russian troops out of the country. Meanwhile, conditions in the country were very laborious. Strikes, riots, acts of terrorism and clashes between the two armed organizations eventually came to fruition.

On January 27, 1918, the government fled from Helsinki to Vaasa. Here, Mannerheim began to raise an army substantially recruited among peasants and young bourgeois intellectuals, the so-called hunters. Mannerheim’s forces launched attacks on the Russian troops in Finland in January 1918. At the same time, the radical socialists revolted in Helsinki, formed their own government and organized their own army based on the red guards and revolutionary Russian forces. They managed to take control of several of the larger cities in southern Finland. However, the Vaasa government started a campaign to gain control of the entire country. What should have been a war of liberty against Russia thus became a civil war.

The Whites had greater military resources and, not least, better military-strategic knowledge to wage a regular war. A Finnish hunter battalion, trained in Germany, as well as a German expeditionary force, contributed significantly to the white military superiority. The Reds received some military material from the Russian troops. Mannerheim quickly took the offensive. After bloody battles, the Red Bastion, Tampere, fell on April 6, 1918. The final victory for the whites came when Mannerheim backed by German troops, took Helsinki on May 19.

The Finnish civil war was bloody with almost 40,000 dead. During the war itself, 3100 “white” and 3400 “red” died. 8,000 “reds” were executed after more or less arbitrary court judgments. Thousands of others received long prison sentences. About 15,000 lost their lives as a result of epidemics and more or less conscious starvation in the white prison camps. At least 10,000 were executed behind the front, either during the war or after the war ended, here too the majority were “red”. The war was going to leave deep marks on Finnish society for generations.

The first period of independence, orientation towards the Nordic countries 1918–1939

After the end of the civil war, Svinhufvud was appointed interim head of state with the title of national director. In September 1918, Landdag, where the socialist representatives were excluded, elected Prince Fredrik Karl of Hesse to the Finnish king. However, Germany’s defeat of the war in November of that year tore the foundation away from the King’s project. Prince Fredrik Karl of Hesse never took office, but resigned to the throne in December of that year. At the same time, the heavily German-oriented Svinhufvud had to step back. Mannerheim took over the head of state and initiated a west-oriented foreign policy.

In July 1919, the Riksdag adopted a new constitution that made Finland a republic. Liberal Kaarlo Juha Ståhlberg was elected the first president. Political life was now stabilized on a parliamentary basis. A right-wing party was formed, the Assembly Party, a Liberal Party, the Progress Party, the Agrarian Party (Center Party), which brought together the vast majority of the self-sufficient peasants and became the Riksdag’s leading bourgeois party, and the Swedish People’s Party, which comprised the most bourgeois-oriented within the Swedish-speaking group. In 1919 a new Social Democratic Party was organized, which eventually gained great support. The Communist Party was banned, but many attempts were made to rebuild it under new names. The party’s leaders were repeatedly sentenced to long prison sentences. The government was based on coalitions between different bourgeois parties. The most important social reform was a 1922 land law (Lex Kallio), which made most homemakers and condominiums in southern Finland their own owners. In 1926–1927, Tanner ‘s government implemented a far-reaching amnesty for people convicted of political crimes.

Finland’s relations with the Soviet Union were arranged by the peace in Tartu (Dorpat) in Estonia in October 1920. It upheld the old great principality of Finland, except that the kingdom was given a corridor to the Northern Sea at Petsamo (today Petsjenga). It was especially among the academic youth a “big Finnish” direction, which required the whole of Karjala (Karelia) and even Ingermanland. The Soviet Union pledged in the peace treaty to give these regions some autonomy, but this promise was broken in Finnish opinion, and in 1921 there was a revolt in Soviet Karelia. The Finnish government confined itself to complaining to the League of Nations, where Finland was a member from 1920; but Finland would not participate in any blockade against the Soviet Union.

Sweden and Finland came into conflict in Åland in 1917. The island population wanted to be incorporated in Sweden, but in 1921 the League of Nations decided that the islands would still belong to Finland as a demilitarized zone with local autonomy. Also, the new bitter dispute between Finland’s two language groups from the mid-1920s created a reaction in Sweden, while leaving deep traces in the home country.

Among the peasants a political movement arose, the Lapp movement. It was reactionary and resorted to acts of violence to break communism. Under pressure from the Lappo Movement, in July 1930 a unifying government was formed with a conservative character led by Svinhufvud. The government dissolved the parliament and wrote new elections in October 1930. The new parliament passed a number of anti-communist laws, including a renewed ban on the communist party. Many communists were convicted. In 1932, the Lapp movement was disbanded following a failed coup attempt (the Mäntsälä coup). In return, a new party, the Fosterland People’s Movement (IKL), was formed, which was based on Nazi ideology. During the Kivimäki government in 1933-1936, a moderate was ledconservative politics with stalemate both against IKL and the social democrats.

The new government of 1937 embarked on extensive social reform work and was granted, among other things, a maternity benefit and a national allowance. In 1932, Finland signed a non-assault pact with the Soviet Union, and in 1935 the orientation towards the Nordic countries was officially established. In the League of Nations, Finland joined forces with the other Nordic countries to advocate a common neutrality policy.