During the Napoleonic Wars, Finland’s fate was determined by Sweden’s foreign policy. When Gustav 4 Adolf refused to follow up the mainland barrier against England, Napoleon’s ally, Tsar Alexander, without declaration of war moved into Finland on February 21, 1808. At the armistice in Olkijoki in November, the army had to withdraw over the Kemi river, and in March 1809 summon Finland’s stands to land on Porvoo (Porvoo), where they had to pay tribute to him as Finland’s great prince; but he at the same time reaffirmed the constitution, religion and the privileges and rights of the individual and the citizens. September 17 of the same year, by appointment in Hamina, Sweden had to relinquish all of Finland and Åland; The Torne River and the Muonio River became border. 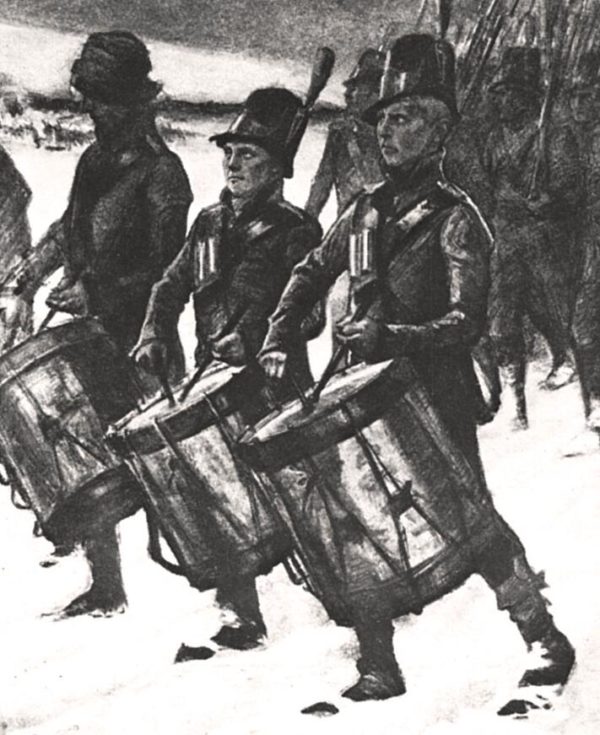 In February 1808, Russia attacked Finland, and in the ensuing war the Swedish-Finnish army was defeated. In 1809, Sweden had to give up Finland to Russia. The picture, The March of the Björneborgarnas , is a watercolor by Albert Edelfelt from 1892. The Björneborgarna was the name of a Finnish regiment under the command of General von Döbeln during this war.

The reorganization of the country’s administration took place gradually. A general governor was appointed in December 1808, and as his adviser on Finnish affairs, the czar appointed a secretary of state in 1811, and in 1811 a special commission was set up in St. Petersburg to handle Finnish cases. In the same year, the districts devoted to Russia before 1809 were united with the rest of the country. Helsinki, which had become the capital in 1812, became the seat of the central administration in 1817, and from 1819 for the “imperial senate”, the local government. It was decided that the country’s income should only be used for its own purposes; the army was greatly reduced.

Alexander 1’s free-spirited reform efforts were eventually replaced by a reaction. The day was no longer called in, and the board was tightened. This reaction continued under Nikolai 1 ; the commission from 1811 was dissolved in 1826, censorship was introduced in 1829, and in 1850 printing of books in Finnish was prohibited (except for economic and religious literature). General Governors Arsenij Zakrevsky (1824-1831) and Prince Aleksandr Menshikov (1831-1855) ruled more or less despotic. But during this period the land progressed both materially and spiritually; new conduits and industrial colleges were added, and in 1828 the university moved from Turku to Helsinki. In 1831, the Finnish Literary Society was founded; At the same time came a national cultural flourishing era with names such as Elias Lönnrot, Johan Ludvig Runeberg and Johan Vilhelm Snellman.

During the Crimean War of 1853–1856, Finland was also destroyed, and most of Finland’s merchant fleet was lost. At the peace in Paris in 1856, Russia undertook not to fortify Åland.

After the end of the war, there was a time rich in internal reforms; the Finnish Commission in St. Petersburg was restored in 1857, in 1863 the Finnish language was equated with Swedish, the same year the Tsar opened the personal Landdag, which had not been convened since 1809, and in the throne it was promised to convene it again three years later.. A new land scheme, which established periodic summons, was ratified in 1869, a coin reform was introduced in 1865, general conscription was introduced in 1878 and freedom of business was introduced in 1879. The conflict of languages ​​led to a split between the Swedish party (svekoman), which represented the nobility and the majority. of the bourgeoisie, and the numerous Phoenomans, who were supported by the clergy and the peasants.

The liberal regime continued under Tsar Alexander 3. But from the mid-1880s a campaign was opened in the Russian press and in historical works against Finland and its independence. The very basis for Finland’s constitutional special position was tried to be undermined. The postal service was in 1890 put under Russian control, the Finnish Committee in St. Petersburg dissolved in 1891, a Greek Orthodox archdiocese created in Viipuri in 1892. Finland’s first political power and the ablest champion of its constitutional rights, Senator Leo Mechelin, was in 1890 forced to close his office.

Kalevala is a Finnish national post from 1849. Kalevala concludes with Väinämöinen – the representative of the old age, leaving the country Kalevala in favor of the virgin son. In this way, Lönnrot underlined his ambition to have the epic describe “the old”, pagan Finland.

In 1898, Tsar Nikolai 2 surprisingly summoned Land Day to an extraordinary meeting, among other things, to bring the Finnish military service law into compliance with the laws applicable to the empire. That same fall, the doctrinal Pan-Slavic General Nikolaj Bobrikov became Finland’s Governor-General. A formal coup d’état took place at the “February Manifesto” in 1899. The legislative power was transferred to the Russian authorities, and Finland was deprived of a number of the rights guaranteed by the Constitution. In vain, the Finns handed the Tsar an address with nearly 593,000 signatures; a deputationof 500 members from all the municipalities of Finland went to St. Petersburg, but the tsar refused to accept any request. The press was bound by stricter and stricter regulations, tightening police control and restricting freedom of assembly. Russification of government, university and schools was prepared.

In 1901, a new military service law was drafted which ended the independence of the Finnish army and implemented the Russian military system in Finland. In March 1903 Bobrikov was appointed dictator and chief administrative officer. The country’s leading men were arrested, all national movements persecuted and every opposition suppressed. In June 1904, Bobrikov was murdered by a young student, Eugen Schauman, who became a national hero.

After the Russian-Japanese war broke out in February 1904, the Finnish Land Day was again called together and the press was given more freedom. In the national elections, the Swedish and Liberal Hungarian parties merged into a “constitutional” party, which overcame the conservative fennomans. The Labor Party, which had switched to socialism, came into contact with the revolutionaries in Russia. When the general strike broke out in Russia in October 1905, it spread to Finland. The country was shaken by a revolutionary crisis.

In Helsinki, the ” Red Guard ” ruled for a few weeks. The Governor General, the moderate Prince Ivan Obolensky, was forced to step down and the Senate resigned. Now a delegation of constitutional landmen met in Helsinki and adopted a statement on the country’s position on the czar. He approved in a manifesto in November 1905 the Finnish views, suspended the previous years’ regulations and handed over to the Senate to draft a new constitution. In December of that year, the tribes met and unanimously adopted the new land agenda. The previous division of votes was abolished, a one-chamber system, general voting rights for men and women over the age of 25 and proportional elections were introduced. The laws came into force in 1906.

In July of the same year, a Russian military revolt broke out at the fortress of Sveaborg; the Finnish Red Guard stood on the side of the revolutionary troops and sought to organize a new strike in Helsinki; the attempt was stranded on the opposition of the bourgeois parties. In May 1907, the newly elected one-chamber land day was opened. Together with the Senate, which since December 1905 was chaired by Leo Mechelin, it aimed to introduce a parliamentary system according to the British pattern.

The Russian government, which was then led by Pyotr Stolypin, reluctantly looked at this movement, and immediately began to circumcise the constitution and Russianise Finland. By regulation in 1908, it was decided that all important bills should be submitted to the Russian government before they came into force; in 1909, as a contribution to the tsarist army, Finland had to make an annual increase in money. Later, the Finnish constitution was almost put out of force. The country day protested against the abuses and was dissolved several times.

Stolypin’s policies were continued by his successors. The “Equal Rights Act” in 1912, which granted the Russians the same rights in Finland as Finnish citizens, deprived the country of the last remnant of independence. When the officials refused to obey the law, they were prosecuted in Russian courts and put in Russian prisons; most of the more prominent officials had since resigned, and from 1912, native Russians began to be appointed senators. This nationalization policy was met with passive resistance, but also contributed greatly to the workers’ fraternization with the Russian revolutionaries.