Before the Spaniards arrived in 1524, El Salvador was inhabited by a number of people divided into at least three language families; maya, pipil and lenca. While the latter linguistically and culturally stood close to the Caribbean and South American peoples, the first two belong to the so-called Mesoamerica with its relatively strong state-building traditions. The strongest was the pipil- empire of Cuzcatlán in the middle parts of the country, where San Salvador was founded in 1525 as part of securing Spanish dominion over Central America. Spain divided the territory into two so-called alcaldias mayores; San Salvador and Sonsonate, which later became the provinces of the Spanish General Capitanate of Guatemala (which in turn belonged to the Viceroy New Spain or Mexico ).

In 1821, Mexico first and then Guatemala tore loose from the Spanish empire. In 1823, the Central American Federation was established and San Salvador and Sonsonate formed the new province of El Salvador. Disagreements between the two major parties, liberal and conservative, led to the dissolution of the Federation of Guatemala, El Salvador, Honduras, Nicaragua and Costa Rica in 1839. While the Conservatives, headquartered in Guatemala, wanted more central government, a closed economy and a stronger one. church, the liberals, with a focus in El Salvador, wanted full liberalization of the economy and strong restrictions on the power of the church.

El Salvador’s political development was thus hampered by several wars between the two wings of the independence struggles, and eventually also with Guatemala as neighboring neighbor, as the big brother in the north became the region’s conservative bastion. The country’s economic development was also hampered by the turmoil. The warring factions financed their armies with foreign loans and used their period in state power to pay the debt. With that, the state was characterized by being a single factional tool rather than the unifying power. 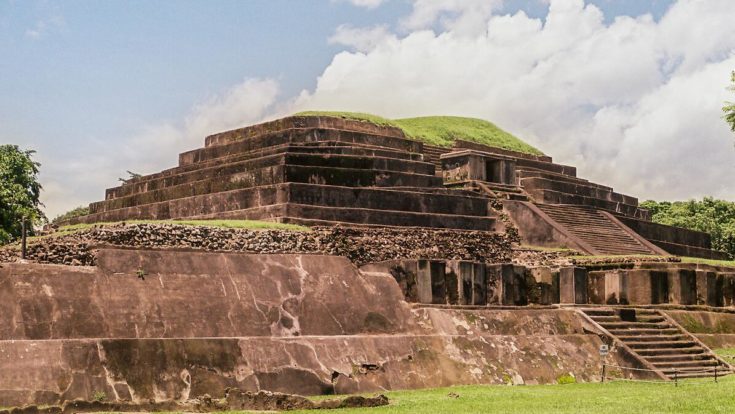 El Salvador was located in the southeastern corner of Mayan civilization. In San Andrés in La Libertad, there are ruins after the Mayan headquarters in the area.

As part of a consolidation of power on the liberals’ hands after about 1870, until now, collectively owned indigenous territories were abolished in 1882 and the land largely gathered on the hands of a small elite. The country’s rich soils were turned into private coffee goods, and in 1900 coffee exports accounted for as much as 90 percent of the country’s income.

The big crackdown in world trade in 1929 sent the coffee prices to the ground and prepared the ground for a pipeline uprising in Izalco, as well as an armed uprising under the Communist Party in 1932. General Maximiliano Hernández Martínez (1882-1966) made a military coup and sent the army against the rebels. In the massacres that followed, as many as 30,000 people may have been killed.

General Hernández sat until 1944, but even in the years that followed, the country was ruled by presidents based on the armed forces. These institutionally simple and often very right-wing governments failed to meet the challenges of increasing modernization of economy and social life. The country’s orderly forces remained private security forces that were available for rent to landlords and others. Political violence and election fraud became commonplace, and in parallel with the Cold War and left-wing radical uprisings, including in Cuba in 1959, burgeoning guerrilla groups also emerged in El Salvador.

In 1979, a group of reform-oriented officers seized state power and announced a series of radical measures, including land reform. Landowners and the upper class strongly opposed this and the most radical of the junta was pushed out as an increasingly stronger and better organized revolutionary leftist party mobilized. In October 1980, the various revolutionary Leninist parties merged in the so-called Frente Farabundo Martí Front for National Liberation (FMLN).

Quite quickly throughout 1980 and 1981, a bloody civil war developed that would last until 1992 and cost around 75,000 people a lifetime. Compared to similar armed conflicts in Latin America this decade, the war in El Salvador was extensive. The FMLN was able to muster up to 8,000-10,000 soldiers and created so-called liberated zones in several parts of the country. The government gradually received substantial support from the United States, while the guerrillas received assistance from Cuba and Nicaragua. It was also a “dirty war” in the sense that the army was supplemented by anonymous death squads and both parties undertook a type of “ideological cleansing” in their areas. 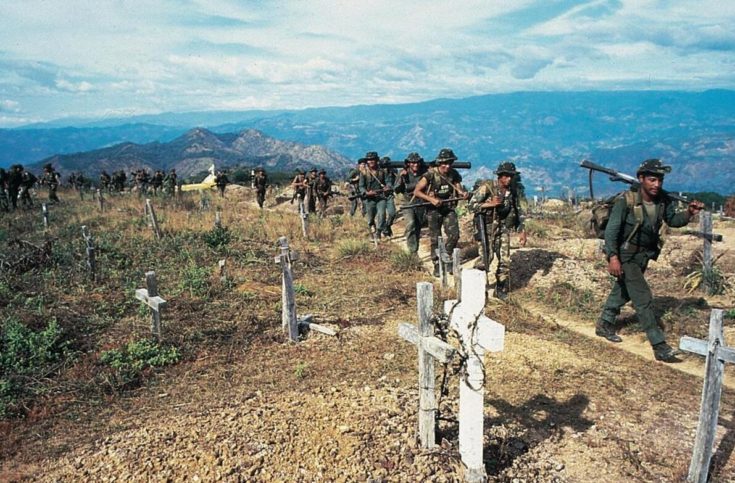 Government soldiers in search of guerrillas in the northeastern El Salvador. Between 1980 and 1986, about 60,000 people were killed in civil war. The crosshairs in the picture mark the place of death of some of the victims of the war, most killed by right-wing death squads and through the army’s purge actions.

After ten years of warfare (and the fall of the Berlin Wall), the situation was in many ways a draw. The UN brokered a peace agreement that was implemented in 1992. The FMLN was transformed into a political party that in 2000 became the largest party in the national assembly, winning the presidential power in 2009 and 2014 after ARENA won all elections since 1989.

However, post-war democratization has been less successful in distributing wealth and making society peaceful. Gang crime has been rampant and both parties have resorted to military action against the so-called las maras (criminal gangs).

The escape of Salvadoran people abroad, especially to Mexico, Guatemala, Nicaragua, Canada and the United States, has therefore continued after the war and even escalated as a result of increasingly poor economic conditions and a series of natural disasters, such as hurricanes, earthquakes and droughts.