The landscape as it emerges today was formed during and just after the last ice age. The height differences are small, but the country has a changing nature with different natural foundations: towards the Bothnia and the Gulf of Finland a fertile lowland with large agricultural areas in the south and southwest, within the coastal country a wooded plateau intersected by watercourses and lakes, and farthest in the north you find tundra.

Finland is between 60th and 70th latitude, and around one third of the country is north of the Arctic Circle.

The country is 1157 kilometers from north to south, and the greatest latitude is 542 kilometers. The coastline is about 1100 kilometers long, incisions not included. The highest point is Haldefjäll (Finnish: Halti, Northern Sami: Háldičohkka) measuring 1324 meters above sea level. Haldefjäll is really a secondary peak to Ráisduottarháldi which is 1361 meters high and is located on the border between Nordreisa and Kåfjord municipalities in Troms county.

The country’s borders total 2582 kilometers; Of these, 1269 kilometers are towards Russia, 736 kilometers towards Norway and 586 kilometers towards Sweden. The border with Sweden follows the Torne River (Finnish: Tornionjoki, Northern Sami: Duortnoseatnu), the Muonio River (Finnish: Muonionjoki) and the Könkämä River (Finnish: Könkämäeno, Northern Sami: Geaggáneatnu) to Treriksrøysa. Against Norway, the watershed forms Anárjohka (Swedish: Inare river, Finnish: Inarijoki) and Tanaelva (Swedish:Tana River, Finnish: Tenojoki, Northern Sami: Deatnu) a natural boundary all the way to Polmak. In the east the boundary follows partly the water divide and in the southeast partly the ridge Salpausselkä. Over half of Finland’s total area is covered by forests and 33,551 km² of lakes and watercourses. There are around 188,000 lakes in Finland over 500 m².

The whole of Finland belongs to the Fennoscandian bedrock shield. The rocks are old transformed granite, gneiss and crystalline shale. Finland is almost completely missing mountains from a younger age than the Precambrian. The Rapakivigranite is one of the youngest and most well-known rocks. This bedrock rock is particularly prominent in southern Finland. The granite crumbles very lightly and provides a weathered material that does not provide very fertile soil.

The bedrock surface is smooth, but hilly and strongly fractured. The main crack direction in the mountain is northwest-southeast, with transverse stripes in the northeast-southwest direction. Along these zones of weakness, the glaciers of the ice age have dug out recesses, death ice pits in the bedrock, which are now filled with lakes and marshes.

The glacier deposits play a significant role in Finland’s topography, especially the deposits that were made in the sea and in the glaciers. The flat bedrock surface inland is covered by a thin layer of moraine gravel. Fresh forms of erosion are not very important. Due to the smooth surface, the ice has not left any traces in the mountain. There are few scouring strips that indicate the direction of the ice.

In the south, the moraine and river deposits are gathered in heavy parallel ridges of gravel and sand that protrude high in the landscape. Particularly characteristic are the Salpausselkä ridges, which cross Finland to the south of the lakes about 25 kilometers apart. These are endemores formed at the edge of the ice masses. These front deposits correspond to the ra deposits in Norway, which can be followed piecemeal to Ryfylke. The end mothers are not damming backs for the lakes, which are so-called troughs that remained after the glaciers disappeared. Across these randdannelsene winds it up elongate ridges, eskers, often as narrow tangs over the lakes. Boxers are characteristic of Finland; they are deposits from the glaciers that went in tunnels under the glacier in the longitudinal direction of the ice. Otherwise there are a number of smaller moraine ridges, drumlines, especially in the eastern part of Finland.

When the glaciers melted, the land was squeezed by the masses of ice, and the sea covered much of Finland during the latter part of the ice age. In the sea, clay sediments have been deposited which have become dry land after the land has risen again, and these now constitute clay letters in the river valleys and otherwise cracks in the landscape. Especially in the south and southwest, a lot of clay was deposited, and here are the best agricultural areas. The uplift is still ongoing at about 40 centimeters per 100 years in the south, and about one meter on the west coast of Vasa. 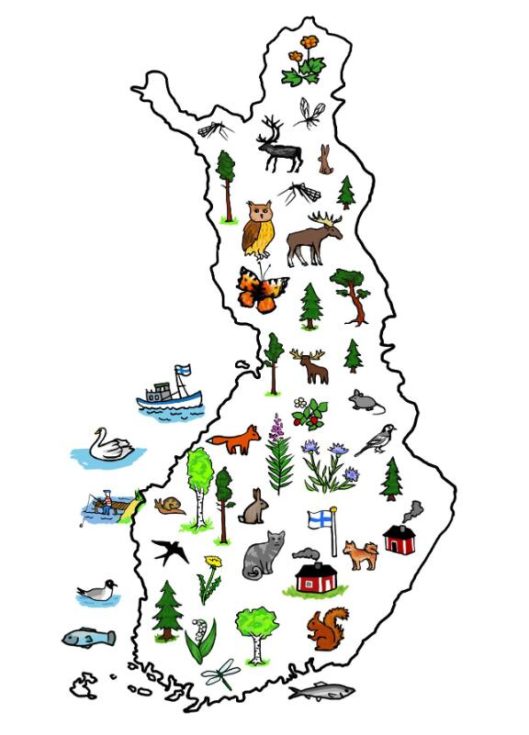 Finland can be divided into three natural geographical regions: the lake plateau, the coastal country and the highlands of northern Finland.

Finland’s climate has a more continental feel than our Norwegian climate, although the Åland Islands and parts of the south coast have a humid coastal climate. Neither in terms of temperature nor rainfall are major regional contrasts. Especially in the summer, the temperature differences are small. In southern Finland, the average temperature in July is 17–18 ° C, in Lapland 14–15 ° C. In winter, the difference is greater. In the Åland Islands, the average temperature in February is −4 ° C, in Lapland −15 ° C. Winters can be very cold here, with minimum temperatures down to –50 ° C. The Baltic ports freeze for 3–4 months completely in the archipelago even in mild winters.

The climatic contrasts between southern and northern Finland are best expressed in the comparison between certain climatic conditions. The growth period (the number of days when the average temperature is above 5 ° C) is 175 days on the south coast and 120 days in Lapland. The number of days with snow covered ground in the southwest is around 100, while in Lapland it is about 200. The snow depth on the Åland Islands is on average about 20 centimeters, east of Ule swamp more than 80 centimeters. The average annual rainfall in the south is 750 millimeters, compared to only 400-450 millimeters in the westernmost part of Lapland, which comes in the rain shadow of the Scandinavian mountain range. It is even drier on the west coast than inland to the east. The period with the most rainfall is July – August. Spring is rainy, especially along the coast.