Two parallel mountain ranges run through El Salvador from east to west. The coastal chain consists of numerous volcanoes, including the 1952-meter-high Izalco, also known as the “Pacific lighthouse” as it had continuous eruptions from it existed in 1770 and up to 1958. The volcanoes in the coastal chain belong to the so-called fire around the Pacific and formed a part of the Pacific plate (Cocos plate) is pressed under the Caribbean plate. Earthquakes and volcanic eruptions therefore occur quite frequently.

Another mountain range, Sierra Madre, with peaks between 1600 and 2700 meters above sea level forms the border with Honduras; here lies the country’s highest mountain Cerro El Pital at 2730 meters above sea level. Between the mountain ranges there is a highland area flowing through the country’s only major river, Río Lempa. Where it flows into the Pacific, it has built up a 25-30 kilometer wide coastal plain.

With its volcanic soil, the inland plateau between the two mountain ranges offers good conditions for agriculture and is intensively cultivated. The capital of San Salvador is located where the inland plateau rises to the coastal mountains at 700 meters. The country has several crater lakes. With the containment of Río Lempa (completed in 1976), El Salvador got its largest lake, Cerrón Grande. 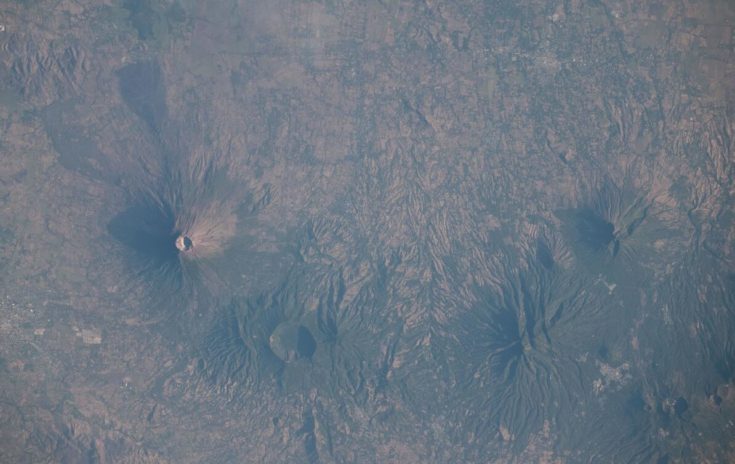 El Salvador has many volcanoes. Here are four of them, outside the city of Usulutan, photographed from one of NASA’s satellites.

El Salvador belongs to the tropical climate zone with an annual average temperature of around 25 degrees Celsius (°C). The temperature varies more with altitude than season. Most of the country is in the “hot zone” ( tierra caliente ), ie at altitudes up to about 1200 meters above sea level. On the coast, the temperature reaches 40 °C; in the mountains the average temperature can drop to 10 ° C and frost occurs.

The country has two seasons. The rainy season, called “winter,” brings rainfall from the Pacific Ocean and lasts from May to October. In higher altitudes, it can reach 2000 millimeters and more. San Salvador has an annual average of 1780 millimeters. Between November and April, the weather is controlled by the trade winds in the Caribbean and rainfall is stopped by the mountains of Honduras. This drying season is called “summer”.

With its location where two tectonic plates and two weather systems meet, El Salvador is considered one of the world’s most vulnerable countries in terms of natural disasters. Over the past 30 years, in line with rising average sea and air temperatures, the country has been increasingly haunted by extreme weather, both in the form of drought and flooding. With more frequent and intense rainfall comes the loss and loss of life, housing, crops and infrastructure in an increasingly densely populated and cultivated country. In addition, rising sea level along the Pacific coast, extensive harvesting and destruction of mangrove areas in the wake of intensive shrimp farming, has also made communities on the coastal plains particularly vulnerable to flooding.

With over six million inhabitants of about 21,000 km², the population density in El Salvador is very high. This puts a great deal of pressure on limited land areas. El Salvador is the second most deforested country in Latin America, after Haiti.

The damage caused by hurricane “Ida” in 2009 (which delivered 522 millimeters of rain in four hours) amounted to about 665 million euros. According to the country’s National Geographic Institute, SNET, 88.7 percent of El Salvador’s territory is vulnerable to extreme natural phenomena and about 95.5 percent of the population lives at risk of being hit.

Most of the country is cultivated. The forest covers only 5% of the country’s area. The natural forest vegetation is deciduous during the dry season. Tropical savanna vegetation occurs in the coastal land. Of economic importance are the trees mahogany, West Indian cedar, Cedrelaodorata, walnut and balm.

Because large parts of the country are cultivated, wildlife in El Salvador is not as rich as in the other Central American countries. The mammalian fauna is associated with both North America ( half-bears, molluscs and cats ) and South America ( monkeys, hares, antlers and gold-haired or aguti).

The bird life is varied, the waterways and coastal waters can exhibit many species of fish.

The reptile fauna includes a variety of lizard and snake species, turtles and crocodiles.