Flags for Countries in Oceania

Oceania is around 9 million km². About 34 million Oceanians live on the continent, which corresponds to 0.5 percent of the world’s population. Oceania (and Australia) refers to the islands of the Pacific Ocean. Australia (lat. Australia) is the “Terra Australis”, the southern country. Since ancient times, explorers have been looking for this postulated mysterious southern continent, which according to the ideas of the time was more like Antarctica.

Below is the list of state flags for all countries in the continent of Oceania and Australia. To check country profile of each nation in Oceania, please visit Countryaah.

The flag was added in 1903 and was officially adopted in 1909. It shows, among other things. Southern cross constellation. The big star, “The Commonwealth Star”, is a symbol of the Australian Government. 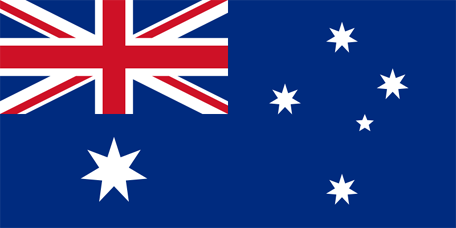 The flag was set in 1970. Before the country became independent this year, the flag was the British Blue Ensign with Fiji’s weapons. The 1970 change only meant that the flag cloth became light blue. The coat of arms includes George Cross.

The flag was officially established in 1979. The wave-shaped blue-white field symbolizes the Pacific. Above the rising sun, a frigate bird is floating, which is characteristic of the archipelago’s fauna.

The flag was officially established in 1979. The oblique orange-white beam symbolizes prosperity and enlightenment. The star has 24 headlands, representing the islands’ municipalities, and the four longer heads stand for the Christian faith of the population.

The flag was adopted in 1979. The four pentagonal stars symbolize the country’s four provinces. The cloth’s “UN blue” color is a symbol of the surrounding Pacific Ocean.

The flag was officially established in 1968. In the symbolism it stands blue for sky and sea, separated by a yellow stripe for the equator, and the white star for the island, located just south of the equator. The star’s twelve headlands correspond to the island’s tribes.

The flag was officially adopted in 1902. A similar flag (British Blue Ensign) was introduced as early as 1867 but with the letters NZ on the canvas. The constellation is the Southern Cross. Unlike Australia’s flag (which has white stars), the stars are red with white outlines.

New Zealand, God’s Own Country, is a state in Oceania. The capital is Wellington. About 4.7 million New Zealanders, New Zealanders of other nationalities, live in New Zealand. The official languages ​​are English and Maori. New Zealand covers an area of ​​around 270,000 km² and is about three times the size of the Republic of Austria. New Zealand’s national holiday is February 6th (the day the oldest constitutional charter, the Treaty of Waitangi, was signed in 1840).

The flag was introduced in 1981. The light blue cloth represents the Pacific Ocean and the yellow round full moon, a national symbol of progress and productivity. According to popular belief, agriculture, fishing and other activities should take place in the light of the full moon to provide the best return.

The flag was established in 1971. The color red and black has an old tradition in the country’s crafts. The bird of paradise in the red field is a national symbol, the constellation in the black field is the Southern Cross and recalls that the country had previously belonged to Australia.

The national day of Papua New Guinea is September 16 (Independence Day from Australia in 1975).

The flag was established in 1977. In the symbolism, blue stands for the sea, green for the forests and the crop, and yellow for the sun. The five-edged white stars mark the island’s original five districts.

The flag was introduced in 1949. The color scheme has a national tradition: red stands for courage, blue for freedom and independence, white for purity. The constellation (Southern Cross) is inspired by the flag of New Zealand.

The flag was officially introduced in 1978 but dates back to 1862. From the beginning it was identical to the Red Cross flag but was changed to avoid confusion. The cross indicates the Christian religion of the kingdom. Red and white are the colors of Polynesia.

The flag was last established in 1997 and is identical to the flag officially used between 1978 and 1995. The blue color symbolizes the surrounding sea. The five-pointed stars correspond to the number of the nation’s nine atolls, eight of which were originally inhabited. The British flag is recessed in the left corner.

The flag was adopted in 1980. The red color represents human blood and tradition’s strength, green for the islands, yellow for Christianity, black for the population. In the black field is the national symbol (wild boar grazing and namelekist). The landscape yellow-black Y refers to the geographical grouping of the islands. 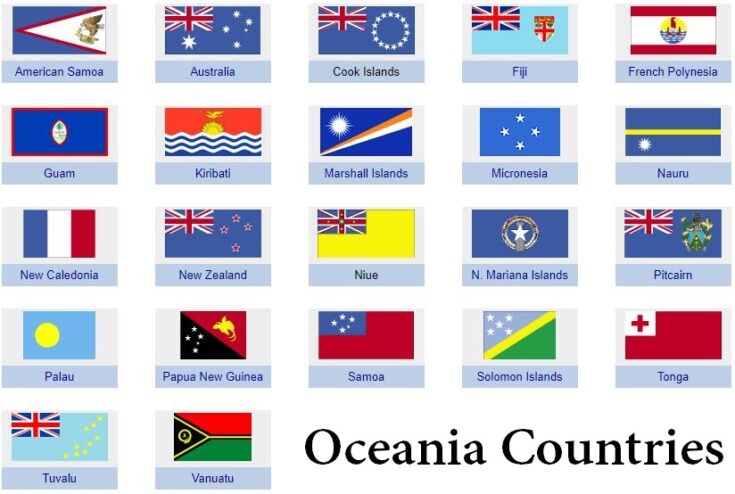