Finland is a combined presidential and parliamentary- democratic republic. The country is unitary state, but Åland is a partly self-governed landscape. The constitution consists of several basic laws, including the form of government of 1919, the parliamentary scheme of 1928, the laws of the national court and the right of scrutiny for the parliament vis-à-vis members of the executive power of 1922 and the law of autonomy for Åland of 1951. The constitution was last revised in 2000.

The supreme executive power has been added to a president, since 1994 elected for direct election for six years at a time. The president can be re-elected once. If no presidential candidate gets at least 50 percent of the vote, a new ballot is held between the two candidates who got the most votes in the first ballot.

The President plays a significant role in Finnish politics, a role similar to that of the French President. This is due to both the president’s powers and the power relations in Finnish politics in general. After the constitutional amendment in 2000, the president no longer appoints the prime minister; this is now left to the Riksdag. Moreover, the president’s power is somewhat cut in foreign policy. But the president can still dissolve the Riksdag and print new elections, reject or revise bills presented by the ministers and refrain from ratifying laws passed by the Riksdag.

Most of these powers exercise the President in agreement with the government. The parliamentary conditions in which coalition governments have been the rule have helped to strengthen the president’s position. The fact that the post-war presidents have often sat for a long time, have been strong personalities and have had a high reputation in the most important neighboring states, has also helped to give the president a strong position.

Urho Kekkonen, who was president from 1956 to 1981, came to dominate politics in particular. The sequels have been more pragmatic. This, together with the depersonalization of relations with the Soviet Union and later Russia, has led to a greater shift in power to the government and parliamentary bodies. Also in relation to the EU, which Finland joined in 1995, the government has played the dominant role.

The Government and the Prime Minister

The Legislative Assembly, the Riksdag (Eduskunta), consists of 200 members, elected for four years in general elections. The voting age is 18 years. As elsewhere in the Nordic countries, ratio choices are practiced. Parliament consists of one chamber, but the draft law is processed in a manner to safeguard some of the bicameral system features: after the bill is processed in one of the committees, it goes to big utskottet (with 45 members) and then finally to the plenary. Constitutional proposals must rest after they have been adopted by one parliament, and then finally adopted, by at least two-thirds majority, by the next.

Finland has a party system similar to the other Nordic countries, with a large social democratic party on the left, the Center Party and some smaller parties in the center and the Collecting Party (Kokoomus) on the right. The Social Democratic Party is smaller than usual in the Nordic countries, which is due to the Communist Party’s traditionally strong position. After 1990, various Left and Communist parties were gathered in the Vänsterförbundet, a left-wing socialist party in a more traditional Nordic sense. The Center Party has traditionally been strong in Finland. In addition to the usual parties, there is a bourgeois Swedish People’s Party, which usually has a support of around 5 per cent and participates in most governments. The Greens have also been the ruling party in Finland. 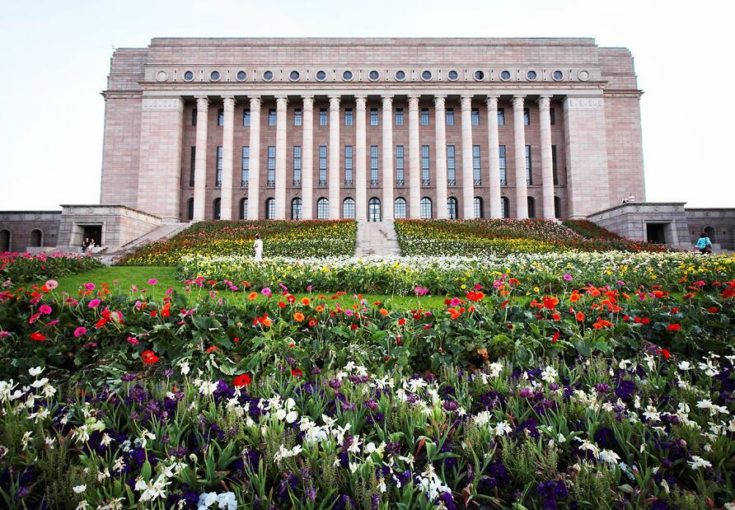 The Parliament House (Eduskuntatalo) in Helsinki is the seat of the Finnish Parliament.

Unlike other schemes in the Nordic countries, the counties are administered by state-appointed governors, while the municipalities have autonomy. In Finland, it is usually common for municipalities to work together in municipal associations to solve some major tasks. Åland has extensive autonomy, and is governed internally by an elected county council with 30 members and a landscape board, which is responsible to the county council. The state is represented on the islands by a governor.

Finnish law is mainly based on Swedish. The judicial system is also built up according to a Swedish pattern. In criminal cases and civil cases, 51 local district courts (with legal judges led by a lawman, in some cases also judges, committees ) are sentenced in the first instance. Intermediate bodies are six main courses.

The Supreme Court consists of a president and at least 15 (currently 18) judicial councils, has a seat in the capital and handles most cases with a selection of five judges; Particularly important matters are decided in the strengthened department (11 judges) or in the plenary.

There are separate administrative courts and also various special courts. Judges of all bodies are appointed by the President – in the two lower courts, on the proposal of a committee of representatives of the courts, the prosecuting authority, the legal faculties and the state of the law, to the Supreme Court and the Supreme Administrative Court on the suggestion of the courts concerned. The judges are irresistible. It is not a practice for the courts to test the constitutional compatibility of laws.