Finland is a republic in Europe, farthest east in the Nordic countries. The country borders Russia in the east (1340 kilometers), Norway in the north (736 kilometers) and Sweden in the northwest (614 kilometers). In the south, the country borders the Gulf of Finland, with Estonia on the other side. Finland belongs to the Åland archipelago, with extensive internal autonomy, between the Bothnian Sea and the Baltic Sea. About a third of the country lies north of the Arctic Circle.

Finland is a forest-rich country with many rivers, lakes and marshes; it’s called ‘The Land of the Thousand Lakes’. Ethnically and linguistically, Finns have a different origin from the Scandinavians. Finnish belongs to the Finnish-Ugric language group together with Sami and Estonian.

The neighborhood with Sweden and the Soviet Union / Russia has marked Finnish history, and the country has been the outpost of the Nordic countries to the east and at the same time formed a bridge between the west and the east.

Finland became independent in 1917. The capital is Helsinki (Finnish: Helsinki ).

The Roman historian Publius Cornelius Tacitus (56-120 AD) must have been the first to use the word fenni, the Latin name for the Finns. He described a Sami nomad people who were spread throughout Finland before being pushed north by immigrant groups.

‘Suomi’ has uncertain meaning, but may be related to suomaa, ‘swampy’. Another, more recent explanation is that the name is derived from protobaltic źemē, ‘land’. 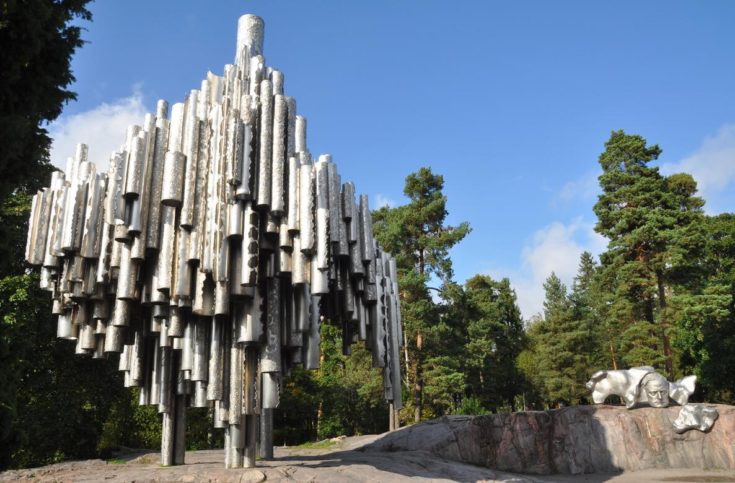 It is common to divide the country into the three natural geographical regions of the coastal country, the lake plateau and the highlands.

The lake plateau in southern and central Finland north of the Salpausselkä moraine is highest in the northeast and has most and largest of the country’s 55,000 lakes. There are many waterways, especially in central Finland with large marsh areas.

Finland has a humid coastal climate on parts of the south coast and Åland, and by the way a continental inland climate. The summers are relatively warm and the winters long and cold with snow cover from November to March. It is most rainy in July and August. Northern Finland has the midnight sun.

Finland is in the taiga table ; This means that approximately 72 per cent of the land is covered by mainly coniferous forests. In the northernmost areas there is tundra vegetation with mountain birch and dwarf birch. The coastal areas have warmly loved trees such as oak and lime. Moorlands comprise almost one third of the inland area.

Wildlife has many commonalities with what is found in Sweden and in Eastern and Northern Norway. There is a lot of moose, fox, charcoal and snowmobiles, while wolves, lynx and brown bears are more rare. Wild boar, raccoon and puppy have immigrated from the east. In the Gulf of Bothnia live oats (grayling) and ringed seals ; the latter immigrated to Saimaa where there is now an isolated population.

In the forests there are, among other things, big birds, blackbirds, owls and woodpeckers. Pike, perch and whitefish are important freshwater fish.

72.0 percent of the population goes to the Evangelical Lutheran Church of Finland and 1.1 percent to the Russian Orthodox Church.

Finland has two official languages, Finnish and Swedish; Swedish in Finland is called Finnish Swedish. Sami also has official status in several municipalities in the north. There are many linguistic minorities in Finland; most are Russian-speaking and Estonian-speaking, then Thai, Chinese, Arabic and English.

Finland is a parliamentary-democratic republic. Åland is a partly self-managed landscape. The president is the head of state and the supreme executive, and is elected in direct elections for six years at a time. The president’s powers and power were reduced by the constitutional amendment in 2002; the president can still dissolve the Riksdag and print new elections as well as reject or revise laws passed by the Riksdag.

The government is headed by a prime minister and is accountable to Parliament ( Eduskunta ). The Riksdag has 200 members who are elected for four years in general elections. The election scheme is based on ratio choices. In 2019, the Social Democrats became the largest party and formed a unity government with the Center Party, the Greens, the Left Party and the Swedish People’s Party. The government consists of a total of 19 ministers, 12 of whom are women and the prime minister is one of them.

Finland is divided into 19 landscapes (counties) with a total of 311 municipalities.

It is the duty of conscience for all Finnish men over the age of 18; they have 6-12 months of armed service or 12 months of civilian service. The defense branches are the army, the air force and the navy. Finnish forces have participated in several peacekeeping operations abroad.

Immigration of the Finno-Ugric tribes from what is now Russian and Baltic areas took place at the latest during the migration period. In the 1000s, Christianity began to become more and more applicable. The Swedish conquest began around 1150, and from then until the 1300s, Finland came after a number of Swedish crusades under Sweden, and Swedish laws were introduced.

Several weeks in the period 1695–1697 led to a reduction in the population of one quarter. During the Great Nordic War in 1700–1721, all of Finland was conquered by Russia in 1713–1716. At the peace in Nystad in 1721, Sweden had to give up Karelia with Viipuri ( Viborg ). A Swedish-Russian war ended with even more Swedish divisions in the East.

In 1808, Tsar Alexander 1 conquered the rest of Finland, which was relinquished from Sweden the following year. Finland became an autonomous great principality within the Russian Empire. Helsinki became the capital of 1812. A strong Finnish nationalism arose; this one opposed the attempts at Russification, especially under the notorious Governor Nikolaj I. Bobrikov in 1898-1904.

Nationalism contributed to Finland being declared independent by the Svinhufvud government after the October Revolution in Russia in 1917. After a bloody civil war, in which a “red” revolution in 1918 was defeated by the “whites” under Mannerheim with German help, Finland a republic in 1919.

During the economic crisis years of 1929-1932, the semi-fascist Lappo movement prevailed. The Communist Party was banned in 1930 (the ban was lifted in 1944).

The winter war against the Soviet Union in 1939–1940 led to great Finnish losses and land divisions, and drove Finland over to the German side during the so-called continuation war in 1941–1944. After the war, Finland became a neutral country in a gray zone between the western and eastern powers.

The peace in Paris in 1947 led to further land disputes. The following year, Finland entered into a friendship and assistance agreement with the Soviet Union; this was the basis for Finnish foreign policy until the dissolution of the Soviet Union in 1991. Finland joined the Nordic Council in 1955 and the UN in 1956.

Since 1991, Finland has had a more extroverted foreign policy. A new agreement between Finland and Russia was signed in 1992. The country joined the EU in 1995, became part of the Schengen cooperation in 2001 and introduced the euro in 2002.

The best agricultural areas are in southwestern and central parts of Finland. The most important grains are barley, oats and wheat. Potatoes are grown all over the country. Animal husbandry is very important. Cattle breeding is most important, but pigs, poultry and reindeer also play a major role. Forests are Finland’s most important raw material, and forestry is integrated into the agricultural economy.

The industry’s raw materials are mainly based on forestry products, with an emphasis on wood processing and the paper industry, which is almost exclusively aimed at the export market. In Outokumpu is one of Europe’s most important copper deposits; Nickel, vanadium, zinc, iron, cobalt, gold, silver and sulfur are also extracted. The metal and engineering industries are the most important. The electrical and electronic industry with production for the international market is also of great importance.

Finland’s most important trading partners are Sweden and Germany.

Finland has a nine-year compulsory school for children aged 7-16. High school is three years. Finnish and Swedish are equated to teaching languages. There are about 20 universities and 30 polytechnic schools.

Radio and television are managed by Yleisradio (Swedish: Rundradion Ab), shortened daily to Yle. It was founded in 1926.

Finnish literature is published in Finnish and Swedish. Poetry on Kalevala meters is about 2000 years old; The national poem ‘ Kalevala ‘ was completed by Elias Lönnrot in 1849. Aleksis Kivi (1834–1872) published the first Finnish-language novel in 1870. Although he wrote poems in Swedish, Johan Ludvig Runeberg (1804–1877) is regarded as Finland’s national poet. The playwright Minna Canth (1844-1897) was the first significant female writer.

Finnish folk music dates back to pre-Christian times, including the ‘Runes songs’ associated with the ‘ Kalevala ‘ squads, Karelian crying squads during ceremonies characterized by strong emotion and Sami joik. Instruments such as tilt, whistles, horns, string harp and neverlur gave Finnish folk a distinctive character. Coatings for church singing in the Middle Ages exist, and organs and organ music are mentioned from about 1550.

From the 1940s a special Finnish tango style was developed. Since 1985, the tango festival in Seinäjoki has been held every summer.

Finnish medieval churches have frescoes dating from the 1300s to the 15th century. The foremost Rococo comedian was Isaac Wacklin (1720-1758), who worked abroad, among other things. In the 1800s, Akseli painted Gallen-Kallela (1865-1931) among other stylized ‘Kalevala’ compositions. Finland’s most important female painter was Helene Schjerfbeck (1862-1946).

Finnish architecture is world famous, with names such as Eliel Saarinen (1873–1950) and his son Eero Saarinen (1910–1961), who designed the US embassy in Oslo. Alvar Aalto (1898–1976) brought functionalist architecture to Finland and is also known for his furniture, glass art and textile art. Companies like Marimekko and Vuokko enjoy an international reputation for fabrics and fashion clothing.

Skiing and ice hockey are great winter sports in Finland. In the 1920s and 1970s, Finland was a dominant nation in long-distance running. In recent years, Finland has had good Formula One drivers.