In international comparison, the European Union is prosperous. On closer inspection, however, there are significant differences between the regions. The map shows one way of measuring these regional disparities. The 10 different types of regions shown represent differences and similarities with regard to the sectoral structure of economic activity, economic performance, the extent of unemployment and natural population development. The map thus shows unequal socio-economic and demographic development patterns in the EU on a sub-national level.

TO THE SELECTED STATISTICAL CHARACTERISTICS

For the present classification of the regions of the EU according to socio-economic and demographic aspects, the following set of characteristics was used:

This selection of characteristics also takes into account the proportion of people employed in agriculture (the primary sector). It results from the difference between the total of all employed persons and that of employed persons in the secondary and tertiary sectors.

With the aim of examining regions of comparable size, the reference areas of the typification are a combination of the levels NUTS 1 and NUTS 2. In Germany, NUTS 1 regions correspond to the federal states; Federal states or small federal states such as Saarland, which are not further subdivided. Check Countryaah to see other countries in European Union.

TO THE RESULTS OF THE ANALYSIS

Against the background of the cluster analysis carried out, ten different regional development patterns can be identified for the 113 NUTS 1 and NUTS 2 regions of the EU. With the deviations of the cluster mean values ​​of the individual examined characteristics from the respective EU average and the inclusion of further characteristics for the population and for the household-related infrastructure as interpretation aids, they can be characterized as follows:

As with all types, it should be noted that the present characterization of the EU regions aims to highlight general trends. The individual situation in the individual regions can differ from this.

TO THE CLUSTER ANALYSIS METHOD

From a methodological point of view, this typification of regions in the EU is the result of a cluster analysis.

Cluster-analytical methods make it possible to examine a large number of objects to be examined (in this case the regions of the EU) across several characteristics for similar characteristics and to summarize them in groups that are as homogeneous as possible, the so-called clusters.

In terms of content, the sorting or assignment strategy is based on the idea of ​​merging the respective specific profile of characteristics for each examination object with those profiles that are most similar to it and separating it from those that are most dissimilar to it.

This idea is implemented mathematically and statistically in three steps. First, the (in) similarity of the regions examined is determined (based on the squared Euclidean distance of their indicator values). The lower the calculated distance value between two regions, the more similar they are; the higher the value, the more dissimilar.

The most similar regions are then successively combined into clusters. In the third step, the threshold at which this summary is to be broken off must be determined so that the merging of the regions still guarantees largely homogeneous clusters, while the number of clusters can be interpreted in terms of content and graphically. The ten-cluster solution was chosen for the present typification of the regions of the EU. 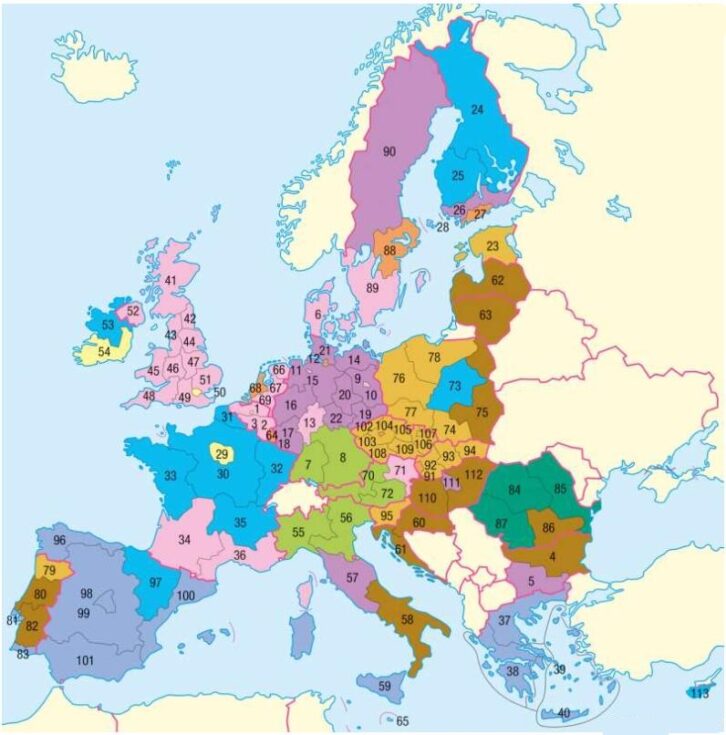