The country was haunted by a bloody civil war in the period 1979-1992 and struggles with poverty, major social and economic disparities and violent crime. The capital and largest city is San Salvador.

The Republic of El Salvador (the name means the Savior’s Republic) was created as a collection of the Spanish provinces of San Salvador and Sonsonate. They took the name El Salvador in 1823, when the area became one of the five Central American republics. The name San Salvador was given by Spanish conquistadors in the 1520s to honor the Pope’s decision to make August 6 the Savior’s Day.

Two parallel mountain ranges run through the country from northwest to southeast. The coastal chain has four active volcanoes and is regarded as part of the so-called ” fire ” around the Pacific. The coastal and inner mountain ranges along the Honduras border are separated by several plateaus and valley plains, and most of the people live here.

90 percent of the earth is volcanic and thus very fertile in a rainy climate. The volcano Izalco, 1950 meters above sea level, had continuous eruptions from 1770 to 1958 and is therefore called the “Pacific lighthouse”. The highest mountain on the border with Honduras is Cerro El Pital, 2730 meters above sea level. Located where two tectonic plates collide, the country is subject to frequent earthquakes and volcanic eruptions. Concentrated rainfall during the rainy season often causes landslides and floods. Climate change over the last 30 years has reinforced this pattern.

El Salvador is the only country in Central America that only drains to the Pacific. The country’s largest river Río Lempa, 422 kilometers long, runs through the valley plains to the northwest before cutting south through the coastal chain and into the Pacific Ocean. Large hydropower plants along the Río Lempa supply the country with 30 percent of its energy.

Most of the country (74.7 percent) is cultivated; forest covers 13.6 per cent of land area. The higher-lying areas, over 1200 meters, have grass beds and deciduous forests. The plateaus between the mountain ranges, on average about 480 meters above sea level, have subtropical vegetation and are intensively cultivated. At the coast there is tropical savannah vegetation and dense mangroves surround the lagoons southeast of Río Lempa’s outlet and along the Fonseca Bay, which separates El Salvador from Nicaragua.

Since so much of the land is cultivated, wildlife is poorer than in the other Central American countries. Mammalian fauna is related to both North America (including half bears and felines ) and South America (including anteaters, armadillos and monkeys ). There are many species of rodents. Bird life is rich, and in the lagoons and on the coast there are rich fish stocks. Reptiles include turtles, lizards, snakes and crocodiles.

El Salvador has a tropical climate with an annual average of about 24.8 degrees Celsius. It is rainy season from May to October and drought period from November to April. Up to about 1200 meters above sea level, it is hot with drying time from December to April; In the highlands, rainfall falls throughout the year, most in June – July. The average annual rainfall is around 1800 millimeters. Because the mountains against Honduras block the eastern trade winds, El Salvador has a drier climate than the other countries in Central America.

El Salvador is the most densely populated country in Central America. Around 87 per cent of the population is misery, that is, descendants of both the indigenous population ( Maya, pipil, lenca ) and Spanish colonizers. About 13 percent are white, mainly of old Spanish descent, but also as a result of recent immigration from Europe and the Middle East. Today, less than one percent of the population is considered indigenous. 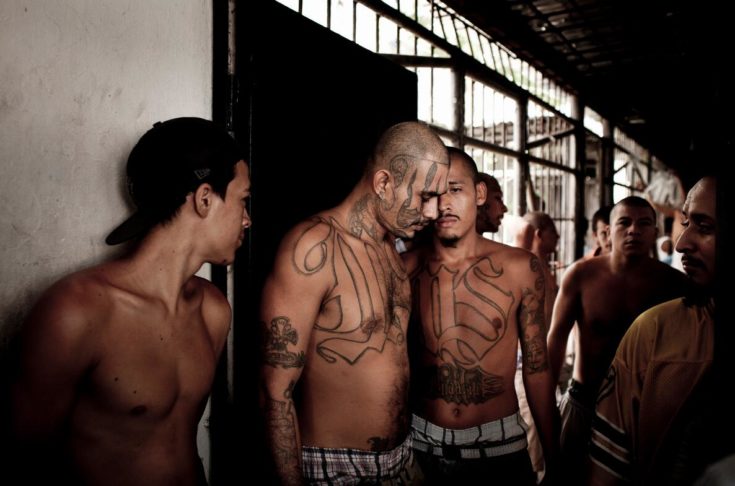 After the Civil War, El Salvador has been ravaged by gang wars, primarily between MS-13 / Mara Salvatrucha and Barrio 18. Many of the gang members are former migrants who have been expelled from the United States for crime. The fight against the gangs has been violent and led to overcrowded prisons – like here in Ciudad Barrios.

Spanish is the official language. A few hundred still speak nawat, the language of pipilin, which is in the same language family as nahuatl (“Aztec”).

The Constitution of 1983 states that El Salvador is a presidential republic with a sharp distinction between state powers. The president is elected in the general election for five years and cannot be re-elected. If a presidential candidate does not get an absolute majority, the Legislative Assembly elects one of the two candidates who got the most votes. The president appoints the government and heads foreign policy and defense. The Legislative Assembly has 84 seats; here the representatives are elected in general elections for three years at the same time as the elections of mayors and municipal councils.

After the civil war ended in 1992, the country’s politics have been dominated by two major parties and have thus been quite stable. The FMLN was formed by the then guerrilla alliance of the same name and represents the left. ARENA also emerged during the Civil War as a collection of right-wing forces.

President Salvador Sánchez Cerén from the FMLN in front of the portrait of Civil War’s most famous victim, Archbishop Romero, in El Salvador’s presidential palace.

The judiciary is presided over by a Supreme Court of 15 members elected by the Legislative Assembly for nine years, so that five new ones are elected every three years. In addition, as in many Latin American countries, the electoral authority, the Supreme Electoral Council, has constitutionally the same rank as the other three state powers. The Supreme Electoral Council was established in accordance with the 1992 peace agreements, together with a new national police force and a human rights representative.

The country is divided into 14 ministries and 262 municipalities.

The country’s armed forces include army, navy and air force and there is one year of mandatory military service for all men over the age of 18. Women can serve voluntarily.

El Salvador is a member of the United Nations and a number of UN special organizations, in addition to the World Bank, the World Trade Organization , the Organization of American States (OAS) and the Central American Parliament and Common Market. El Salvador has also joined the vast majority of international and regional (under the auspices of the OAS) human rights conventions.

El Salvador has Central America’s fourth largest economy. Agriculture is the most important industry in terms of employment and accounts for 10.7 per cent of GDP in 2015. Coffee accounts for most of the export revenue, and cotton, coconuts and sugar are also grown for export. In addition, shrimp are exported. For their own consumption, maize, beans, rice, millet and vegetables are grown. cattle is important. Transfers from Salvadoran overseas have become an important part of the economy; one-third of all households receive such subsidies and, as a whole, their income amounts to as much as the value of the country’s exports.

El Salvador is Central America’s most industrialized country; the industry accounts for 25.5 per cent of GDP (2015). Textiles, foodstuffs, footwear, furniture, pharmaceuticals, rubber products, fertilizers and cement are manufactured, among other things. Salvadoran banks and companies are often the largest of their kind in the region.

The service industries are the largest economic sector with 63.8 per cent of the employed. Tourism is developing.

The United States is the most important export and import partner, and in 2001 El Salvador used the US dollar as a currency unit to stabilize the economy.

The nine-year primary school is free and compulsory from the children is seven years. However, the school is poor, with class sizes of up to 50 pupils and high dropout rates. It is estimated that 11.7 percent cannot read and write. Many people therefore choose private schools, which are usually run by a church community. About 39 percent start in high school, which offers a two-year general and a three-year vocational race. The state university, Universidad de El Salvador, was established in 1841. In the 1960s, the private UCA was formed by the Jesuits, and since then several private universities have been added.

After the Civil War, El Salvador is considered a country with a high degree of freedom of the press. The oldest nationwide newspapers are from the first half of the 20th century and around 2000 there were eleven newspapers. Since 2000, a number of online newspapers have gained considerable ground. There are two state as well as a number of private television stations, and about 65 radio stations.

Arturo Ambrogi (1875-1936) is considered El Salvador’s most important short story writer; Alberto Masferrer (1868-1932) is perhaps the most significant thinker. The hometown poet Salvador Salazar Arrué (Salarrué), (1899–1975) wrote insightfully about the life of the Pipil and the uprising in 1932. Roque Dalton (1935–1975) was a well-known leftist radical poet, who was also wound up in an internal settlement in one of the guerrilla groups. Álvaro Menen Desleal (1931–2000) wrote poetry, stories and plays. The lawyer David Escobar Galindo (born 1943) has gained a famous name as a poet and writer throughout Latin America.

Football is the most popular sport in El Salvador.