El Salvador is the most densely populated country on the American continent. Most Salvadorans live in the fertile, central part of the country. About a third of the residents live in or around the capital, San Salvador. The population is young, about half the population is under 25. 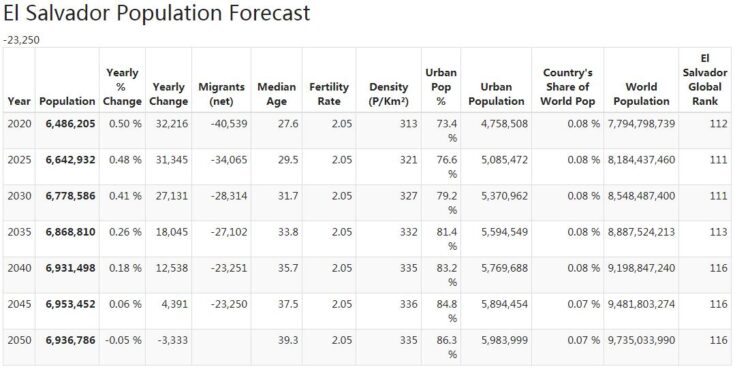 The money the overseas Salvadorans send to their families in El Salvador contributes to an important part of the country’s economy.

A large majority of the residents identify themselves as ‘ mestizo ‘ (mestizo), with mixed descent from mainly indigenous people and whites (mainly Spaniards). A little more than a tenth identify themselves as Europeans. The indigenous people pipil and lenca make up less than one percent of the population and their languages ​​have largely disappeared.

Then-President Mauricio Funes declared in 2010 that El Salvador is a multi-ethnic country and officially apologized for the state’s historical discrimination and marginalization of indigenous peoples.

The official language is Spanish spoken by everyone. Only a few today master the languages ​​(Nahua, Lenca and Cocoa Opera) spoken by the indigenous peoples before the Spaniards arrived in the 16th century. The Constitution provides protection for the languages ​​of the indigenous peoples, but no concrete measures have been taken to preserve them.

Spanish is the official language

Funes asks for forgiveness after massacre

President Funes is asking for the government’s pardon for a massacre in the village of El Mozote in 1981. More than 1,000 people were killed at the massacre, almost half of whom were children. The murders were carried out by a government battalion that accused the residents of the city of cooperating with the guerrillas. The massacre was by far the worst in the civil war.

At least 32 dead after tropical storm

At least 32 people die in the tropical storm 12-E, including rainfall. The government orders evacuations and announces disaster states.

The United States places El Salvador on a black list

For the first time, the United States places El Salvador on its black list of countries considered to be producers or major transit countries for drugs. Belize is also on the list, where all seven Central American countries are now. The reason is believed to be the influence of Mexican drug cartels in the region. In El Salvador, the Mexican cartels are suspected of cooperating with the criminal youth gang maras. According to the United States, El Salvador is vulnerable to drug smuggling from South America to the United States due to the country’s location on the Pacific Ocean. Four tons of drugs passed through El Salvador in 2009, according to estimates by the US authorities.

The country is shaken by a revealing report on organized crime with a wide range of politicians, judges, businessmen and military involved. Several people are mentioned in the name of the reputed online newspaper El Faro, for contacting a drug network called Texis Cartel. At a press conference, President Funes admits that the network exists and has links with government institutions, and says that the government should take action.

Parties are ordered to be dissolved

The Supreme Court orders the National Reconciliation Party (PCN) and the Christian Democratic Party (PDC) to be dissolved. The Court approves a decree that allowed the parties to continue despite losing a 3 percent cut in the 2004 presidential election. PCN and PDC, which together dominated Salvadoran politics from the 1960s to the late 1980s, must cease to be parties as soon their elected representatives have extended their terms of office. The PCN will soon resurrect as the National Consultation Party (Partido de Concertación Nacional, PCN) while the PDC may, after a brief change of name, regain its original name.

Ten members of the youth gang Mara 18 and one police are sentenced to between 4 and 30 years in prison for the murder of French-Spanish journalist Christian Poveda 2009. He had made the documentary film La vida loca (The Crazy Life) about the war between the youth gang.