Economy and Business in Afghanistan

Afghanistan experienced strong economic growth after international players entered the country in 2001. Gross domestic product (GDP) grew by 70 per cent after 2002. After the decline in international presence from 2014, economic growth has stagnated sharply: from 11.9 per cent in 2012 to 0.8 per cent in 2015. Corruption, acts of war and lack of infrastructure are among the main causes that hamper the country’s economic development. In addition, the economy has become very dependent on aid. In 2017, economic growth was estimated at three per cent.

The many war years have had major consequences for business in Afghanistan. In the 1970s, the country was mainly self-sufficient in food, and something went for export. When the Soviet Union withdrew from the country in 1989, food production was reduced to less than half, and livestock to about 60 percent of pre-war levels. After the fall of the communist regime in 1992, the economy has been chaotic. In the 1990s, Afghanistan had several regional economies that functioned independently; in some cases with own currencies. The country’s border areas became increasingly linked to neighboring countries economically.

Before the war, almost half the agricultural area, which amounted to 3.2 million m², was cultivated using artificial irrigation systems (kareezer). In 2007, the artificial irrigation systems operated in only about half of previously irrigated areas (1.8 million m²). Large agricultural areas were also still mined. An extensive mine clearance program has been ongoing since the 1990s, but is partly sabotaged by the release of new mines. In 1998–2001, Afghanistan was hit by the most severe drought in decades. About one million people lost their nutritional base after the crops withered and the cattle died. Hundreds of makeshift emergency camps grew up around the larger cities, and more than 30 percent of necessary food had to be imported.

In 2002, the transitional government under Hamid Karzai passed a law aimed at attracting more foreign investors. The state guarantees that foreign-owned companies are not nationalized, and provides up to five years of tax exemption for new investments. Following the fall of the Taliban regime in 2001, strong regional warlords, most often formally titled governor, have rebuilt regional economies with little connection to central power. For the central government, it has been very challenging to get a grip on the country’s economy. After increasing pressure, the governors in 2003 agreed to transfer a larger portion of the provinces’ customs and tax revenues to the national board. After Afghanistan joined the WTO in 2016, the country is subject to the organization’s free trade regulations.

The chaos in the economy was long characterized by inflation; periodically up to 200 percent per year. Inflation was exacerbated by the fact that some warlords printed their own banknotes of the common currency afghani, so that a colossal amount of banknotes came into circulation. A new Afghan, worth a thousand times more than the old one, was therefore introduced in 2002.

For many Afghan farmers, cultivation of opium has periodically been the main source of income. It is believed to yield from three to six times higher revenue per unit area than other crops. Opium production in 2003 was estimated by the UN drug program at 3600 tonnes, up six per cent from 2002. Despite a strong international presence in the country, opium production and exports have continued to grow, especially in recent years. Only in the years 2015–2016 did opium production increase by ten percent.

Most of the opium from Afghanistan ends up in the West like heroin. Illegal export of Afghan opium is expected to have brought in about $ 2.7 billion in 2014, while opium trade generated $ 68 billion globally in 2009. 83 percent of the heroin produced in the world thus originated in Afghanistan (figures from 2009). A powerful and powerful network of smugglers, traders, manufacturers and processors extends across ethnic and national borders. The opium trade is also an important revenue base for the Taliban (USD 155 million in 2009).

The war has caused major environmental damage, not least in the forest. At the end of the 1960s, about 50 percent of the area in Afghanistan was made up of forests, while today the figure is about two percent. Due to lack of energy during many war years, the forest has been used for firing, and has also been illegally exported abroad.

Figures from the UN showed that 58 per cent of the unemployed population are employed in agriculture, and agricultural income constitutes about 25 per cent of GDP (2015). In the past, agriculture accounted for about half of GDP. Agriculture and animal husbandry are of great importance in Afghanistan. Just over ten percent of the area is arable land. Artificial irrigation is essential in most places, and about 65 percent of the cultivated area becomes artificial water. Agriculture is dominated by small-scale, family-run small farms. Bulls and donkeys are frequently used as draft animals. Wheat is the most important grain. Otherwise, corn, potatoes, barley, rice, fruit, grapes, cotton are grown and sugar beets. Pistachios are grown for export. The nomads breed sheep (including karakul lambs) and goats, and also keep horses and camels. Significant opium cultivation. 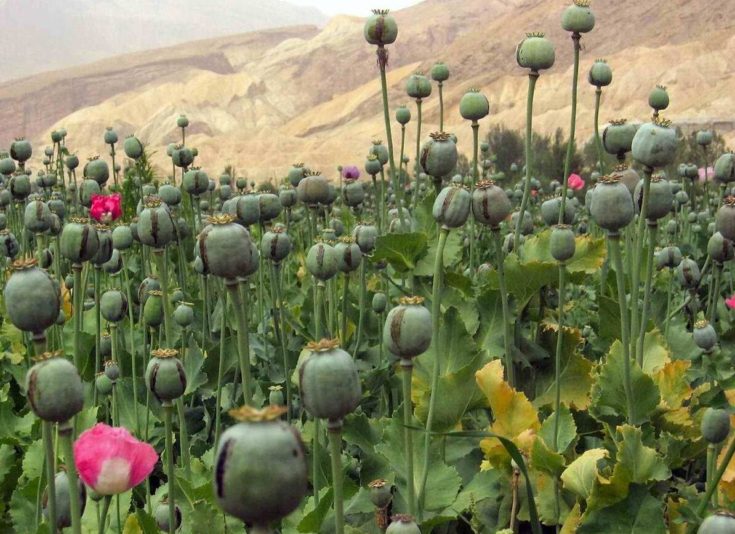 For many Afghan farmers, opium cultivation has periodically been the main source of income. It is believed to yield from three to six times higher revenue per unit area than other crops.

Afghanistan has rich mineral resources, but its utilization is limited due to a lack of local markets and difficult transport conditions. There are deposits of natural gas at Sheberghan in the north, 70 kilometers from the border with Turkmenistan. Coal is mined in several places, including at Mazar-e Sharif, and there are large iron ore clays northwest of Kabul. There are deposits of copper, lead, zinc, strontium and more. In Badakshan there are rich deposits of lapis lazuli (lasurstein), which have been mined for more than 4000 years. 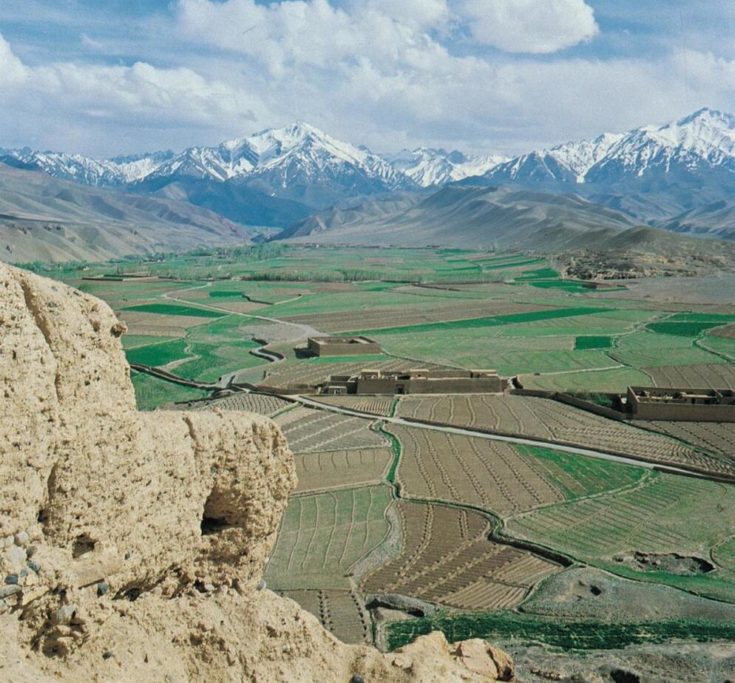 Afghanistan’s industry is underdeveloped and is largely based on the processing of agricultural products. It produces cotton products, artificial fertilizers, cement and sugar. In connection with the country’s many bazaars, a large craft-based industry (often home industry) manufactures consumer goods. Traditional crafts include carpet weaving, metalwork, glassblowing, leatherwork and goldsmiths.

A large part of the economy in Afghanistan is associated with foreign trade. Total export and import revenues account for 53 per cent of official GDP (2016). Here, however, there is a big difference between exports and imports. While the country imported goods worth US $ 7.7 billion, exports amounted to only US $ 571 million (2015). The figures do not include illegal export goods. The largest exporters of the country’s exports are Pakistan (39 percent), India (33 percent), Iran (5 percent), the United Arab Emirates (4.3 percent) and Russia (3.2 percent). In addition to illegal opium exports, major export products include fruits and nuts, carpets, hides, skins and semi-precious stones. Among other things, it imports food, petroleum products and various consumables. The majority of imports come from Iran (24 percent), Pakistan (17.4 percent), China (13.5 percent), Turkmenistan (8.2 percent) and Kazakhstan (5.5 percent).

Afghanistan was admitted in December 2015 as a member of the World Trade Organization ( WTO ). The authorities expect the membership to increase foreign investment and higher employment. It was assumed that by the end of June 2016, the Afghan parliament would ratify the terms of membership. In July 2016, Afghanistan became a full member of the organization.

The topography, the great distances and a small developed transport network have made transportation both difficult and expensive in Afghanistan. Transport was previously referred to caravan freight. This has slowed down, but the nomads still account for part of the freight transport. Trucks, buses, camels and donkeys are the main means of transport. Before the Russian-built ring road and tunnel through the Salang Pass (3363 meters above sea level) opened in 1964, large parts of the northern areas were closed off from Kabul and the rest of the country in winter. The road network was greatly improved during the 1960s and 1970s, but was later demolished. United States, World Bank, Saudi Arabia and other international players since 2001 have been aiming to build and expand the ring road in Afghanistan, and have improved and / or expanded a total of 2,000 kilometers of it. A 233 kilometer stretch from Faryab in the north to Badghis has not yet been completed, despite the ring road project receiving three billion US dollars from international donors. The sum has made the ring road the second most expensive aid project in the country.

Afghanistan’s railway network is very poorly developed. In 2011, a railway line was opened between Mazar-e Sharif and Termez in Uzbekistan. However, the Uzbekistan Railway Works (Oʻzbekiston Temir Yoʻllari ‘) has gained a monopoly on the commercial operation of the railway. The Asian Development Bank (ABD) estimated that the railway would bring economic growth to the border areas and increase Afghanistan’s foreign trade. However, an independent evaluation pointed out that the project was ineffective and that it was unlikely to achieve the expected results. Large operating costs and over-ambitious earnings targets were highlighted as the main reasons for this.

Kabul and Kandahar have international airports, as well as almost 50 smaller airports around the country. Only Amu-Darja, the border river in the north, is navigable for larger vessels. River ports along Amu-Darja have road connections to Kabul. Karachi (in Pakistan) is normally the main transit port for shipping traffic.