Most Dominicans are of mixed African and European origin. They usually see themselves as Latin Americans rather than West Indies. Population growth is high. One third of the residents are under 15 years of age.

The native residents who were on the island when the Spanish conquerors arrived disappeared in a few decades (see Older History). More recently, it has been shown that many Dominicans are abused even by the native people of Taino, and that a certain linguistic and cultural heritage remains. 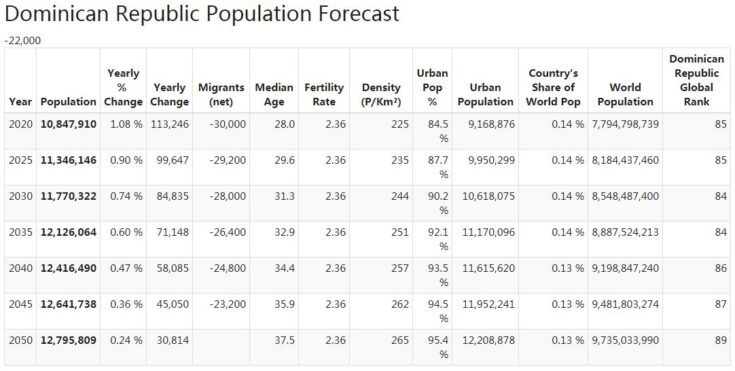 There are minority groups that are considered “white” and “black” respectively. Racism is a sensitive chapter (see Political system, Foreign Policy and Defense). Ljushyade dominates political and economic life. They originate in Europe, not least the Canary Islands and the rest of Spain, as well as in the Middle East. Black Dominicans, who predominantly have roots in Africa, are often affected by discrimination. This also applies to Haitian immigrants to a great extent.

Up to one million Haitians live in the Dominican Republic, most as paperless and under threat of deportation. The Haitians are subject to discrimination and abuse. Even children born in the country by Haitians are usually treated as illegal immigrants (see also Political system).

Tens of thousands of Dominicans migrate to Puerto Rico illegally every year and many continue to the United States itself. The boat trip to Puerto Rico can be difficult and many have died along the way. Nearly 1.5 million Dominicans are expected to live in the United States, primarily in New York and surrounding areas, but also in Florida. More than a tenth of the population has emigrated since the 1960s, mainly for economic reasons. Around 100,000 American citizens live in the Dominican Republic. Many of them have dual citizenship.

Spanish is the official language. The largest minority language is Haitian Creole, which has its roots in French. In the Samaná Peninsula, there is a small group of English-speaking descendants of freed slaves who came from the United States in 1824, when the Dominican Republic was just taken over by the independent state of Haiti (see Older History).

clear majority of mixed black and white origin, minorities of white and black

Spanish is the official language