Costa Rica has the most uniform population in Central America. Most of the residents are mainly of Spanish or other European origin. The largest minority group is blacks and people with roots in both Europe and Africa. There are also smaller groups of indigenous people.

The proportion of residents from both Europeans and indigenous peoples is relatively small and is not distinguished in the statistics. Five of six Costa Rican people identified themselves in a 2011 census as belonging to the group of whites or mestizos (as they are of mixed European and American origin).

The blacks are descended from immigrants from Jamaica. Like a large group of Chinese, they came to Costa Rica in the late 1800s to work at railroad construction and banana plantations. For a long time, blacks were forbidden to move inland, and even today most of them live in the province of Limón on the Caribbean coast. In the 2011 census, nearly 8 percent of residents identified themselves as either a blend of blacks and whites, or as blacks. 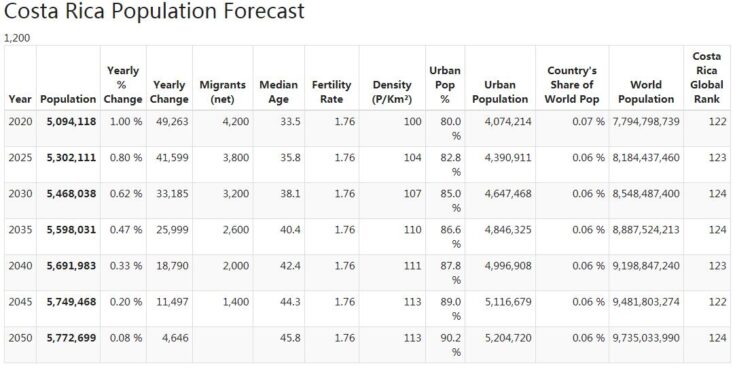 The few scattered ethnic groups that existed in the area when the Spaniards colonized it in the 16th century diminished rapidly after the arrival of Europeans. Many died of the diseases brought by the colonizers and those who remained were quickly mixed up with the Spanish speakers. The indigenous people (sometimes called Indians) that exist today are divided into eight groups and are found mainly in mountain and forest areas in the southern part of the country. The majority live in or adjacent to one of the country’s 22 reserves for indigenous people.

The previous high birth rates in Costa Rica have dropped sharply. In 2000, almost every third resident was under the age of 15, while the figure 20 years later is just over every fifth.

Around one in ten residents are born abroad. Three out of four foreigners are from Nicaragua. Immigration from there accelerated during the civil war in the 1980s and has continued for economic reasons. According to official figures, close to 290,000 Nicaraguans lived in the country in 2011, but the actual figure was estimated to be significantly higher. The poorer and darker-skinned “nicas” are often seen with unblinking eyes by the Costa Ricans.

Flaming unrest in Nicaragua in 2018 led to a sharply increased influx of asylum seekers from there. The crisis in Venezuela means that refugees are also coming from there. Previously, the unrest in Colombia contributed to the great immigration from there. Stable democracy, pleasant climate and tax benefits for pensioners have also attracted North Americans to settle in Costa Rica.

Spanish is the official language and is spoken by most. The blacks speak an English Creole language (mixed language), but since the 1960s, children learn Spanish in school. A few speak Native American languages, all of which belong to the chibcha group.

Spanish is an official language, an English Creole language and a few native languages ​​are also spoken