Many of Bremen’s most important sights are located in Altstad. Here you can reach most people on foot in car-free streets. The culture in the city is partly characterized by the fact that Bremen belonged to the Hanseatic League, and the fact that the city has been (and is) a hub for trade, both in Europe and between the continents. Here are some of the many sights in Bremen that are worth a visit. 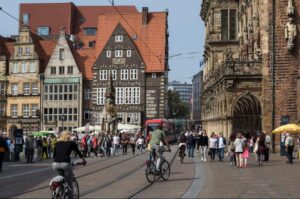 The old town of Bremen is also called Mitte, and consists of the oval part bounded by the river Weser on one side, and old moats on the other, if you look at the map. In the Middle Ages, the whole area was protected by city walls. Within the Altstadt you will find many of the city’s most important sights, as well as naturally the oldest buildings. At the same time, not all houses in Altstad are old, because large parts of Bremen were bombed during World War II. The perhaps most important monuments and buildings fortunately escaped, including the old town hall and cathedral on Marktplatz, as well as the medieval district called Schnoor or Schnoorviertel. 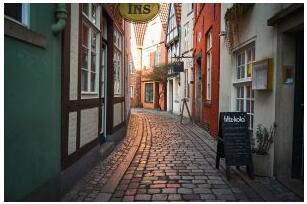 In the southeast corner of the Altstad, down towards the river Weser, lies the area known as the Schnoorviertel . The name simply means “string” in Norwegian, as in “twine”. This is because craftsmen who produced all kinds of ropes and cables lived and worked in this area back in the old days. The settlement escaped the Allied bombing during the war, and many are virtually unchanged since they were built between the 17th and 18th centuries. However, the oldest houses are even older, and probably from the 15th century. Schnoor is a wonderful place to take a walk in. Along the cobbled alleys you will find many nice cafes and eateries, small shops with crafts, a Gothic church from 1225, and several interesting museums. 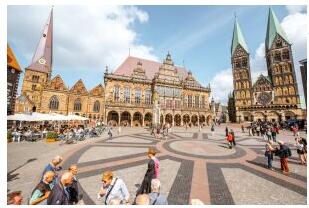 The large market square in the Altstadt is a sight in itself, and also where you will find some of the city’s most important cultural monuments. The city’s beautiful town hall stands here, right next to Bremen Dom and the church Unser Lieben Frauen. Directly above is the city’s parliament, a building that many believe is a disgrace (it was built in the 1960s), but which at least provides a somewhat strange contrast to all the old. There are also a number of baroque houses and buildings on Marktplatz, and in the side streets of the square. In the middle of Marktplatz stands Bremen’s famous statue of the knight Roland (Bremer Roland). The authentic Roland was a count, and based on this count a legendary figure of the same name developed. You will find Roland statues in many German cities, and also some other European states.

The Cathedral of Bremen 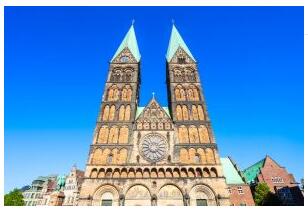 The cathedral in Bremen, also called Bremer Dom, is dedicated to Saint Peter, and belongs to the evangelical church tradition. Like all other old church buildings, it has been extended and changed over the years. Originally, there were several different religious buildings on the site. The oldest parts of the cathedral that you see today are from the 1000s, while most are in Gothic style and built in the Middle Ages. The two west-facing towers were built in the late 19th century, at a time when many churches and cathedrals were being restored in Germany. Bremer Dom is unique in many ways, including the fact that you will find five pipe organs in different rooms in the building. You will also find 8 mummies in the cathedral’s basement, lying in coffins with glass lids, so visitors can take a look.

The 110-meter-long Böttcherstrasse is located in the Old Town, on a side street that juts out from Marktplatz, and is known for its remarkable architecture. Most of the houses were built in the period between 1922 and 1931, by the coffee importer Ludwig Roselius, in collaboration with the artist Bernhard Hoetger. The houses were decorated with expressionist art, and were in fact partly while as a tribute to Hitler and Nazism. However, the German dictator did not like this type of art, and Roselius never got the membership in the Nazi party he wanted. Today, Böttcherstrasse is considered a monument and a kind of cultural center. Here you will find, among other things, several cafes, museums, galleries, craft shops, artist workshops, as well as a famous carillon. 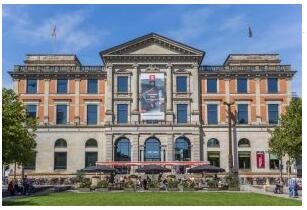 The Ubersee Museum in Bremen is the city’s natural history and ethnographic museum. It deals with the contact that has taken place across national borders and between the continents, with the Hanseatic city of Bremen as a starting point. The collections have permanent exhibitions from the continents of America, Asia, Africa and Oceania, as well as an exhibition that focuses on global contexts. Special exhibitions of various kinds are also set up. At the Ubersee Museum you can explore much of the world without having to travel far. The museum appeals to the curious and eager to learn at all ages. The museum is located at Bahnhofplatz 13, next to the train station in the city center. 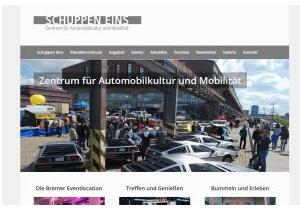 Schuppen Eins is a museum for all kinds of vehicles, but with the main emphasis on vintage cars. The museum is located in one of the old warehouses in the harbor near the center of Bremen, and more specifically in Konsul-Smidt-Straße 20-26. Two investors bought the warehouse in 2007, and converted it into one of the city’s most exciting museums. Inside the walls you can see over 60 different classics, such as old models from Borgward. This was a car brand that originated in Bremen, and made its first car in the city back in 1903. Among the cars on display you will also find some that are for sale, if your wallet and holiday budget can withstand the cost. At Schuppen Eins you will also find a nice restaurant and café, as well as good shopping opportunities in the same complex. 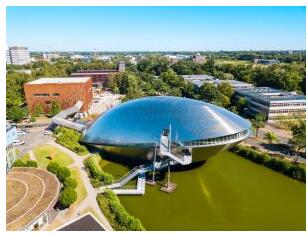 This unique science center in Bremen is housed in a spectacular building that looks like a whale, or a clam made of silver shells. The area inside is about 4000 square meters, and deals with three main themes, namely man, the earth and the universe. Here, most things are interactive, and visitors can learn about technology, nature and themselves via many exciting facilities. You can, among other things, create lightning, compose digital music, play games, explore how the technology of the future will change the human body, experience earthquakes and test how good you are at lying with the lie detector. The center has a good restaurant and a nice cafe to settle down in between all the educational experiences. 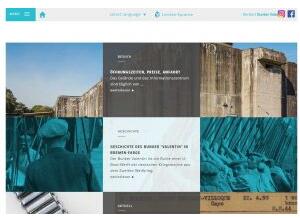 This submarine bunker was built in the suburb of Rekum in the last two years of World War II. Here the Germans had planned to build submarines, but production never started due to the Allied bombing of the fortified shipyard. The size of the complex is staggering. Valentin, which was the code name for the facility, is 426 meters long, 97 meters wide, and has walls and ceilings that are about 4.5 meters thick. Everything consists of reinforced concrete. In 1983, a monument was erected here, commemorating the more than 1,800 prisoners of war who were forced laborers during construction and who died in miserable conditions. Since 2010, the bunker has had the status of a museum and war memorial.

Bürgerpark is the place to relax when you have taken in the rest of Bremen’s exciting sights. This is the city’s most important and prettiest green lung. In the beautiful park you can stroll, go to the museum, look at the trees and birds, play mini golf, ride horses, row a ride on one of the ponds, or have lunch or coffee at one of the many cafes. If you have kids on a city break, this is where you will find the best playgrounds. There are often concerts, shows and outdoor theater in the Bürgerpark. The name comes from the fact that it was the citizens of Bremen who built the park themselves in the 19th century. At that time, the parks were normally reserved for the naughty and the nobles.