While agriculture used to employ most of the population, fewer people in Asia now work in agriculture. The proportion of cultivable land varies tremendously between the different countries in Asia – from around 60 per cent of the land area in Bangladesh to less than 0.5 per cent in Mongolia. Rice is one of the most important crops and main food in much of Asia. China is the world’s largest rice producer, while India, Thailand and Vietnam are major exporters.

In recent decades, and especially between 1970 and 1990, agricultural yields have increased rapidly without land use increasing accordingly. In the 1960’s, a comprehensive streamlining of agriculture in Asia began with the ” green revolution “. New high-yielding varieties of wheat and rice in particular were introduced, and over a twenty-year period these modern cereals became dominant in Asian agriculture. The new varieties required increased use of fertilizers, pesticides and irrigation, and in many cases displaced the more robust local varieties. This resulted in the loss of many poor farmers who could not afford fertilizers and pesticides for the new varieties. However, the total crops increased rapidly. 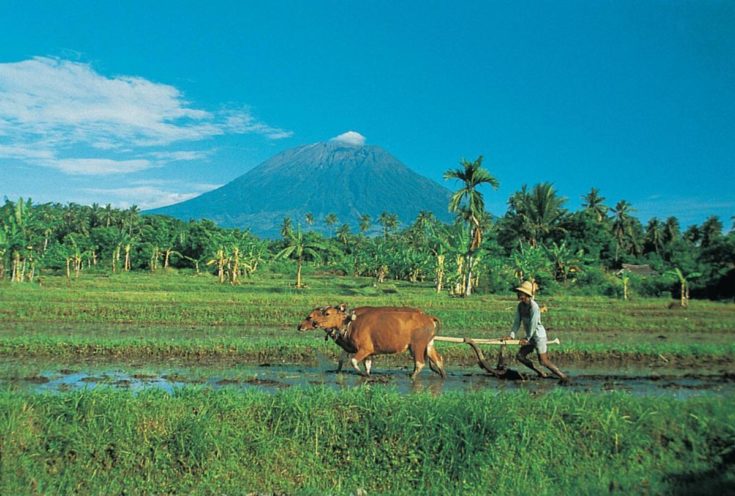 Rice is an ancient cultural plant in Asia. The picture shows a farmer plowing a rice field in Bali.

Since the late 1990’s, many Asian countries have joined the World Trade Organization (WTO), and increasing globalization has changed the conditions for agriculture. Agriculture in Asia, which was previously completely dominated by grain production, and especially rice, has been commercialized and diversified. At the same time, food imports have become cheaper and can in many cases outperform crops from remote areas inland, especially in countries where transport and infrastructure are poorly developed.

In 2017, 75 percent of the world’s 4.5 million fishing boats were native to Asia. The three countries in the world that account for the most wild-caught fish are China, Indonesia and India, and of the world’s 15 largest fishing nations, nine are Asian. In China, the fisheries sector (catching, processing and trafficking) provided work to more than 14 million people in 2015, of which more than half worked full time. Several of Asia’s fishing fleets fish in the international zone, far from Asian waters. 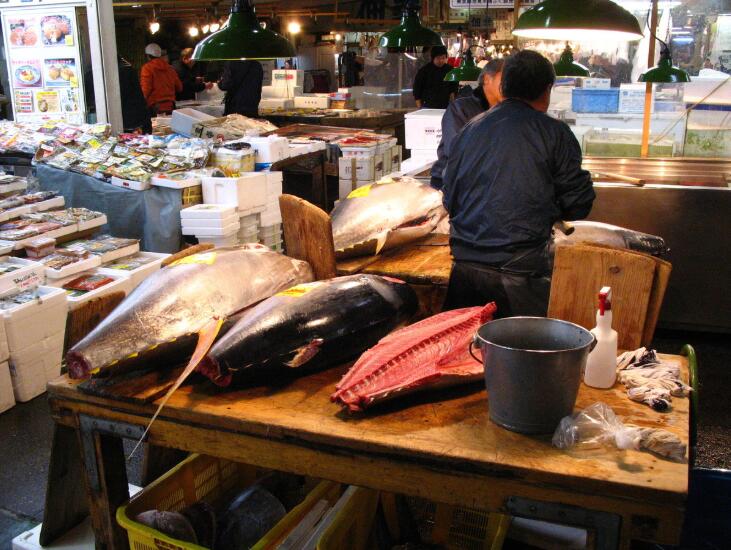 Fish is an important part of the Asian diet. From the big fish market in Tsukiji in Japan’s capital Tokyo.

Fish and other seafood are an important source of protein in many Asian countries, in some places the most important. In South Korea, each person eats an average of about 60 kilograms of fish a year, almost three times more than the world average, and in Japan, fish has traditionally been a more common dietary component than meat. Fish and seafood consumption has risen significantly in Asia since the 1980’s, partly due to population growth and prosperity, but also to an increase in aquaculture production, especially in China.

In many places, fishing is threatened by destructive fishing methods, pollution, overfishing and illegal, unregulated and unregistered (IUU) fishing. Dark numbers are large, but the World Resources Institute estimates that between four and seven million tons of fish are sold and bought illegally in the Pacific annually. This causes losses of between $ 11 billion and $ 21 billion each year, including for Pacific countries that have rights to parts of this fishery. Illegal fishing also poses a threat to many fish species, including several tuna species, which are highly sought after in the international market.

Aquaculture has been a very fast growing sector. In Southeast Asia, for example, production increased from under a million tonnes in 1995 to almost 8 million tonnes in 2016. Of the approximately 19.3 million jobs in aquaculture worldwide in 2016, over 90 percent were in Asia.

Large parts of Asia are covered by forests. The Russian taiga, with about 12 million square kilometers of boreal coniferous forest, is the world’s largest forest.

Around 25 percent of East and Southeast Asia is covered by forest – in Japan, as much as 68.5 percent of the area is forest – while South Asia has a forest cover of 18 percent. In Southeast Asia and the Pacific region there is a lot of rainforest. The largest remaining rainforests are located in Indonesia, Malaysia and Papua New Guinea.

Indonesia’s large rainforest areas are under pressure from the country’s forestry industry.

In several countries, the rainforest is declining in extent. This is mostly due to the timber industry, mining and cut down to make room for plantations and other commercial activities. In addition, the sector is dominated by corruption and crime. In Cambodia, for example, timber is the largest natural resource, but much of the harvesting is illegal and occurs without replanting. Papua New Guinea is another major exporter of unprocessed tropical timber, but revenue is disappearing out of the country because foreign companies account for much of its operations.

The largest importer of both rainforest and other timber, for example from Siberia, is China. Most of the processing of Asia’s timber also takes place there.

Large parts of the world’s industry are in Asia today. You can check countryaah official website to find import and export data for all countries in Asia. The region produces a large proportion of the goods on the world market, and in particular China has been called the “world factory”.

However, the different economies in the region have their special features. Japan has long been a leader in cars, optics and electronics, but has faced stiff competition from other countries. The country’s industry is now concentrating heavily on so-called future industries, such as advanced computer technology, industrial robots and space industry.

China’s industry has been sharply diversified and modernized since 1980. The country is now a world leader in a variety of industries such as textiles, automobiles, fertilizers, IT, electronics and telecommunications. In recent years, China has also established itself as a space nation, and in 2019 landed a Chinese spacecraft on the back of the moon. However, the heavy industry is still significant, and China is a leading producer of steel and cement. The mining and construction industries are also large.

In India, a quarter of the working population is employed in manufacturing. India is now a major manufacturer of cars (including the low cost car Tata), electronics and IT. The production of diamonds and gemstones employs over 5 million people, contributing around 7 percent of India’s GDP and 15 percent of commodity exports.

In Bangladesh, four million people, including a large majority of women, work in the textile industry. It accounts for around 80 per cent of the country’s export revenue and a significant portion of the sector is informal. The value of Bangladesh’s clothing exports increased from just over USD 600 million in 1990 to almost USD 33 billion in 2018. The country is also a world leader in ship scraping, another weakly regulated and labor intensive industry. The sector covers two-thirds of the country’s demand for steel, but the accidents, environmental and health damage are many.

Many Asian countries are moving from labor-intensive to knowledge-intensive economics. The largest economies in Asia are now investing in technological development and have been responsible for the rapid development of digital payment solutions, media platforms and other technologies that are now used worldwide. Companies from China, India, Japan and South Korea are major players in telecommunications and digital services, including social media. For example, the Chinese video sharing app TikTok was one of the world’s most downloaded apps in 2019.

GDP growth in many Asian countries has created a growing need for energy. Japan’s energy needs have quadrupled since 1945, and in more recently industrialized countries such as China and India, demand has grown even steeper.

Asia (with Australia, but excluding the Middle East) accounts for just over 40 per cent of the world’s total primary energy consumption, and is the clear leading continent in terms of energy consumption in clean numbers (compared to North America for around 20 per cent and Africa 3.5 per cent).. On the other hand, if we divide energy consumption by population, the picture will be quite different, in North America 295 gigajoules of primary energy per capita, while Asia uses 60 gigajoules per capita. The Asia-Pacific region accounted for just under 50 percent of the world’s CO2 emissions (from oil, gas and coal combustion ) in 2018. 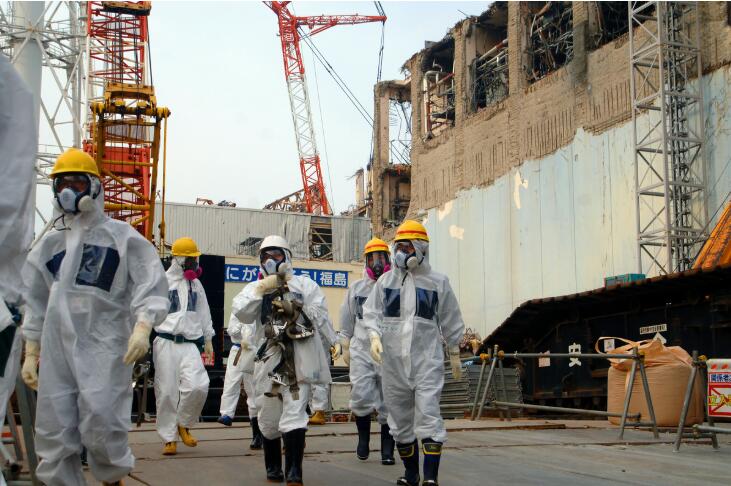 Many countries are now trying to reduce their dependence on fossil fuels. Despite continued high coal consumption, China is a leading force in this process. The country accounted for 45 percent of global renewable energy production growth in 2018, more than the entire OECD combined. Among other things, China has a huge potential for continued hydropower development.

70 per cent of the electricity supply in India comes from coal. However, the country is also investing heavily in wind and solar energy to remedy the energy shortages that cause frequent power outages, and to electrify the more than 200 million inhabitants who still lack electricity.

In addition, Asia is investing in nuclear power. Over two-thirds of the reactors under construction in 2019 were located in Asia. China is the world’s third largest producer of nuclear energy and produced around 277 TWh in 2018. Capacity is still expanding. In Japan, where around one-third of energy production came from nuclear power in 2010, all reactors were shut down following the accident at the Fukushima power plant in 2011. Several reactors have now rebooted, and it is planned that at least 20 percent of the energy will come from nuclear power. 2030.

Other major nuclear producers in the region include South Korea with production of 127 TWh in 2018, India with 35.5 TWh and Pakistan with 9.5 TWh. No countries in Southeast Asia produce nuclear power.

Asia’s energy needs are expected to continue to increase in the years to come due to growth in both the economy, population and – in many countries – proportion of the population of working age. For example, the labor force is increasing rapidly in Southeast Asia’s most populous country, Indonesia. Between 2020 and 2030, the country’s energy needs are expected to double, and Indonesia is poised to become Asia’s third largest energy consumer after China and India. The country is highly dependent on fossil fuels.

Several of the Asian economies are now dominated by service industries. Singapore is considered the leading financial center in Southeast Asia, and 93 percent of Hong Kong’s GDP is generated in the service sector. Trade, import and export are major sectors. The world’s ten busiest container ports are all located in Asia, and seven of them are Chinese.

The cultural sector is significant in many countries. For example, South Korean pop music, known as k-pop, has become a billionaire industry with dedicated fans around the world. The Indian film industry also has a large audience both nationally and internationally, producing just under 2000 feature films annually. The so-called Bollywood films are produced in Mumbai and played in Hindi, but the country also makes films in about thirty other languages. Also Pakistan, Iran, China and Taiwan have major film industries, Hong Kong is known for its action films, while Japan has a large anime industry.

The tourism industry in East and Southeast Asia is growing very rapidly, much due to an increasing number of Chinese tourists. Tourism represents a significant share of the economy for many countries in Asia. For example, Thailand had close to 40 million foreign tourists in 2019, and its revenues accounted for over 20 percent of the country’s GDP. In neighboring Cambodia, just under 30 percent of GDP comes from tourism.

Low prices, weak currencies and large investments in infrastructure and transport have enabled rapid growth. Volcanic eruptions and epidemics are among the factors that can affect growth negatively, political turmoil is another. Following the end of the civil war in Sri Lanka in 2009, the number of visitors per year increased from around 450,000 to nearly 2.5 million in ten years.