Over the years, Finland has been the scene of changing cultural impulses from both the east and the west. The oldest art monuments on Finnish soil are some small animal sculptures ( moose, bears ) from the Stone Age, partly free sculpture and partly designed as a finish on knife shafts and axes. The Iron Age animal ornament in Finland has an independent design in the 600-700s with a Swedish- style foundation, including some quirky “worm clips”.

In the 1100-1200s, it grew in the southern parts of the country, Karelia and Savolaks, a powerful and independent ornamental style with elements of Roman plant ornamentation. The oldest sculptural works of the Christian era are wooden altar figures on the transition between Romanesque and Gothic style (mid-13th century). From the end of the century until the fall of Visby in 1361, the influence of Gotland prevails in sculpture as well ; Often these are purely import pieces that show changing Western European styles.

After 1360, the great import of North German altars begins; to Nykirka thus Meister Francke in Hamburg performed approx. 1425–1450 the magnificent Barbarian age with painted and carved figure scenes. In particular, Bishop Magnus Olai Tawast (died in 1452) worked to provide the churches with richer equipment. Characteristic of the church buildings is now the richer use of bricks, both in constructive joints and decorative, as in the richly ornamented gable fields we find especially in the New Churches. Grave monuments were richly decorated, such as that of Bishop Hemming in the Turku cathedral, and in Nousi’s church is Henrik the saint’s shrine with engraved picture plates in French bedding.

After 1300 it becomes customary to adorn the churches with frescoes, and in the 15th century church rooms (Turku, Kalanti, Hattula ) we encounter a figurative-rich realistic and narrative style alternating with planting, closely related to contemporary Swedish church painting.

With the Reformation, art lost its most important support, the church. In the 1600s and 1700s, it is the popular wooden building art that dominates. The prolific church painter Michael Toppelius (1734-1821) adorned a number of the period’s timber churches. Otherwise, Finnish folk art reaches the highest in the colorful riches, preserved from the 17th century. Portrait painters such as court miniature artist Elias Brenner (1647–1717) and the pervasive Isak Wacklin (1720–1758) represent the academic art of the time.

In the sculpture, Sergel pupil Erik Cainberg (1771-1816) initiates neoclassicism, but he is also the first to address topics from the national post Kalevala. This endeavor was continued by the Swedish-born CE Sjöstrand (1828-1906), the creator of the first public monument in Finland, the Porthan statue in Turku (1864). Throughout his years of study in Copenhagen and Rome, and the meeting with Thorvaldsen, younger sculptors such as Walter Runeberg (1838–1920), Johannes Takanen (1849–1885) and Robert Stigell (1852–1907) were also characterized by neoclassicism, but especially the last two increasingly under the influence of French realism.

Finnish painting in the 19th and 20th centuries

Recent Finnish painting art begins with the folk painter Alexander Lauréus (1783-1823) and the fine portrait painter Gustav W. Finnberg (1784-1833). Robert Wilhelm Ekman (1808–1873) had a conscious and extensive national and romantic program when he settled in Finland in 1845. His drawing school in Turku and the Finnish Art Association in Helsinki, both founded in 1846, were important measures. Among other things, the Art Society supported the von Wright brothers : Magnus (1805–68), Wilhelm (1810–87) and Ferdinand (1822–1906), who painted landscapes and bird images in an intimate, homely tone.

With Albert Edelfelt (1854-1905), Finnish painting takes the step fully from the romantic idealization of the German school to the French sense of reality and clarity. Based on the naturalistic portrayal of Finnish everyday life, his art in the 1890s gains a deeper national and historical perspective and finally opens in the monumental painting Per Brahe inaugurates the Turku Academy, in the University of Helsinki (1904–05, destroyed 1944). The more mundane side of Edelfelt’s painting is taken up by Gunnar Berndtson (1854–1895), while Eero Järnefelt (1863–1937), Aukusti Uotila (1858–1886), Pekka Halonen (1865–1933) and Gabriel Engberg (1872–1953) ) portrayed native nature and peoples with genuine empathy.

The naturalistic depiction of primitive Finnish peasantry is also the starting point for Akseli Gallen-Kallela (1865–1931), who, however, was soon captivated by the symbolic currents of the time and gave them an imaginative and distinctive national form in their Kalevala images. With his Kullervo fresco in Helsinki (1901) he also initiated the new Finnish monumental painting, which was soon taken up by Edelfelt, Halonen, Rissanen, Enckell and Simberg. Juho Rissanen (1873–1950) otherwise cultivated a stylized peasant painting, while Hugo Simberg (1873–1917) continues Galen’s fabulous fantasy art.

Finland’s most important female painter Helene Schjerfbeck (1862-1946) leads the line from 1880s naturalism to the 20th century and ends in a suggestively suggestive, highly personal art. Something similar applies to Ellen Thesleff (1869–1954). Magnus Enckell (1870-1925) interprets the beauty longevity of his youth work, but under the impression of neo-Impressionism in Finland, mediated by the English-born Alfred W. Finch (1854-1930), he gathered with this some younger artists, Verner Thomé (1878- 1953), Mikko Oinonen (1883–1956), Yrjö Ollila(1887-1932) and more, about a purely quaint-colorist program (the pure palette). The group called itself Septem, and appeared to the public in 1914.

Already, just after the Second World War, radical modern currents emerged, among others, by Ole Kandelin (1920–1947), the constructivist Sam Vanni (1908–92) and the surrealist Turku artist Otto Mäkilä (1904–1955). Turku became the center of surrealism in Finland, with artists such as Kauko Lehtinen (1925–2012) and others.

Around 1960, the new informal movements such as spontaneousism and abstract expressionism broke into Finnish art, with names such as Jaakko Sievänen (1932–2013) and Esko Tirronen (1934–2011). A softer lyrical abstraction cultivates Kimmo Kaivanto (1932–2012). Modern Finnish graphics, which in etching and dry needle have achieved their best results, are fabulous, often with surreal elements, and of high quality. We can mention Pentti Kaskipuro (1930–2010) and Simo Hannula (1932–2016). 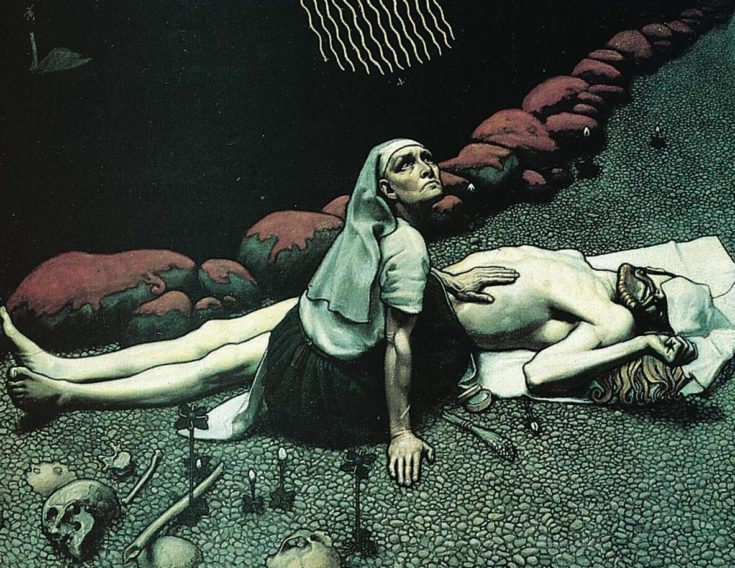 Kalevala, the Finnish heroic national poem, has been an important source of inspiration in Finnish music and visual arts. Lemminkäinen’s mother, 1897, by Akseli Gallen-Kallela, is one of several famous paintings with motifs taken from Kalevala. Art Museum of the Ateneum, Helsinki.