Following the fall of the Taliban in 2001, the new government in Afghanistan, with foreign aid, has built up a new defense force: Afghan Armed Forces (AAF). It consists of an army ( Afghan National Army, ANA) and an air defense ( Afghan Air Force, AAF), with the former being by far the largest component. The Afghan National Defense has gradually become a more active participant in the war in Afghanistan, and from 2013 has taken over responsibility for the country’s security from the International Security Assistance Force multinational force.(ISAF). This was discontinued at year-end 2013/2014, but a number of countries – including Norway – have continued to support the Afghan defense through the Resolute Support Mission (RSM), from 2014.

The modern Afghan defense was built with Soviet support following the Soviet Union’s invasion of Afghanistan in 1979. At the same time, resistance groups, mujahedin, were formed to fight the occupying power and its allies, ie the government forces. Mujahedin, who developed into the Taliban and assumed power in the country in 1992, was originally supported – with funding and weapons – by the United States and Saudi Arabia, and trained in Pakistan.

When the Soviet-backed Afghan regime collapsed in 1992, the Afghan defense also disintegrated. Various warlords, affiliated with different peoples and clans, took control of parts of the armed forces, and Afghanistan entered a period of civil war. The defeat of the Taliban in 2002 happened by the North Alliance in particular joining the US-led invasion forces, taking Kabul. The United States, at the head of a multinational force, launched Operation Enduring Freedom (OEF), targeting the al-Qaeda and Taliban terrorist groups.

Before that, Afghanistan has a long military history, and the Afghans have fought – and beaten – a number of invading forces, including British. The first organized national army was established after the Second Anglo-Afghan War in 1880. Local organization of military defense, within clans and in local geographies was still common. After the Third Anglo-Afghan War in 1919, the defense was downgraded, to be rebuilt in the 1930s. In the 1950s, the modernization of the defense was supported by the Soviet Union, which also built the Bagram base outside Kabul, which the United States used from 2001. The military cooperation with the Soviet Union continued until the Soviet occupation ended in 1989. Soviet weapons assistance ceased in 1991.

The fight against terror

During the Taliban, the al-Qaeda terror network was set up in Afghanistan, from which the September 11, 2001, terrorist attacks on targets in the United States were planned. The US responded with the so-called war on terror, including with military attacks on the Taliban and al-Qaeda in Afghanistan. These were organized through a multinational military force that, under US leadership, launched Operation Enduring Freedom (OEF). Norway also participated early in the OEF.

After the Taliban regime was defeated, a new Afghan leadership was deployed, led by President Hamid Karzai. He received broad international support; political, economic and military. A new multinational force was established, operating simultaneously with the OEF: International Security Assistance Force (ISAF). This was introduced from December 2001, including the one with Norwegian participation.

One of the mechanisms for training Afghan forces has been the operative training of Afghan officers through so-called mentoring teams: Operational Mentor and Liaison Team (OMLT), from 2006. Among other things, through OMLT, ISAF forces have conducted counter-insurgency co-operation – and eventually under the leadership of Afghan National Army (ANA). From 2012, the Afghan forces gradually took over responsibility after ISAF. In June 2013, they assumed responsibility for security in all of the country’s provinces and districts. 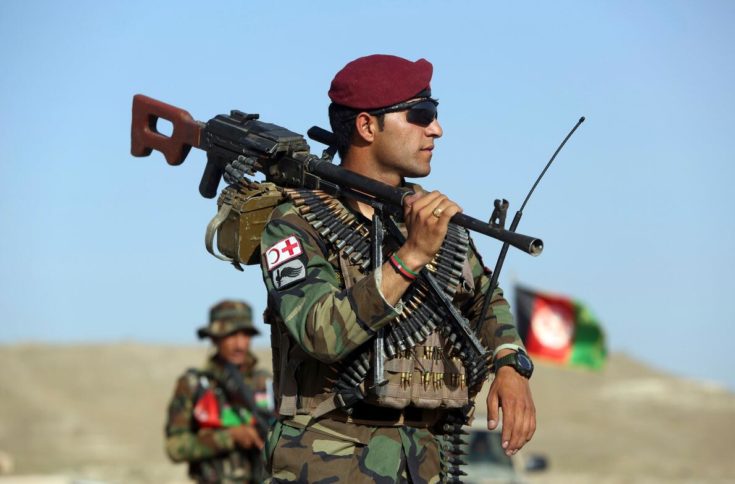 Norway participated in ISAF from its inception in 2001, and until its liquidation in 2013. Norway also contributes to Operation Resolute Support. The Norwegian effort consisted in ISAF’s latest phase not least in training the ANA as well as a special unit in the Afghan police in Kabul: Crisis Response Unit (CRU). NATO has also helped establish the Afghan National Defense University, from 2013.

The army has a workforce of 167,000 active personnel. Heavy equipment includes 20 T-55 and T-62 tanks and 996 armored personnel vehicles. The army is mainly organized with 31 so-called kandaks, corresponding battalions, which are then included in brigades and corps. Special forces include land forces.

Afghanistan’s president is commander-in-chief of the defense forces, through a defense minister. Operational management is exercised through a command center in Kabul. The Afghan defense relies on international financial support; the majority come from the United States.